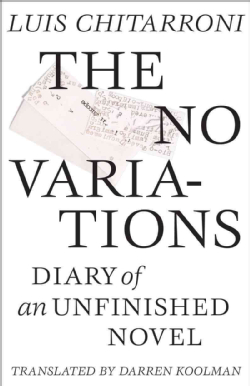 THE NO VARIATIONS: THE DIARY OF AN UNFINISHED NOVEL
by Luis Chitarroni
translated by Darren Koolman
Dalkey Archive Press, 256 pages

Readers can only hope to be included in that community, that “we,” for the community described so affectionately here makes this one of the most memorable passages from The No Variations, Luis Chitarroni’s dense and often disorienting new non-novel. The passage appears early in the text, while expectations of narrative continuity still hold purchase. Lateness, in fact, extends hope for a plot, and with its charisma buys patience against the frustrations of plots subsequent absence. Instead of plot, the novel offers personality. The expansiveness and potential inclusivity of this passage pleasurably inscribes the writer himself; yet the same sort of expansiveness can slide easily into solipsism, an overindulgent memoirish quality. 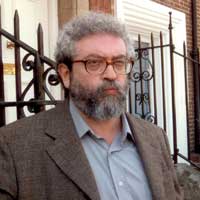 The No Variations balances between anecdote and comprehensive narrative. The tension between the two appears as early as the subtitle, which includes two distinctive genres, the diary and the novel. Presumably about the process of finishing, or trying to finish a novel, the text lingers in the vicinity of narrative, very literally “about” a novel, but there is no plot proper to this text. The specter of a plot as the ideal end of these notes makes its absence in the text a frustrating element. Instead, Chitarroni offers vignettes of the protagonist, Nicasio Urlihrt, trying to revive a literary anthology with poems and prose by friends and colleagues. The compilation of these notes makes little sense, however, although it does collate little plots, some more realistic than others, and often narrating the obstacles of everyday life that make literary work so difficult: “There were whole days and nights,” Chitarroni continues, “During which we lost our way…during which we lost our purpose. We bummed around exchanging tales of days gone by, anecdotes, gossip.”

At times these fragments are satisfying and pleasurable. Furthermore, the text’s refusal to neatly organize the diffuse experience of living isn’t a particularly shocking or innovative technique. Instead, what makes the book so compelling is its identification with the protagonist’s sense of frustration of balancing writing and living. Occasionally he glamorizes the writer’s preoccupation with life, with a glow of pyrrhic consolation. He insists, in occasional bursts, that living is more important: “The writer doesn’t really want to write, he wants to be; and in order to truly be, he must face up to the difficult challenge of not writing at all—not even a single line—of not theorizing, of not lifting a finger.” The seduction of the first part of that assertion (that to be is better than to write about being) tends to overshadow the diarist’s assertion that not writing is also difficult. The protagonist goes on to claim that in order to strive to live rather than to write, he “became deaf” to the world around him, obliged himself to ignorance, rather than, presumably, be tempted by the desire to create or represent.

If, for Chitarroni, the distinction between writing life and living it is central, his text from the start sides with writing: it is, after all a diary, and life-writing is thus the ideally professed genre. One technique deployed by the diarist in evading responsibility for writing or failure to write, is to continually point to his use of a pseudonym. Nicasio Urlihrt’s adoption of a publishing name, “Hilaríon Curtis” allows him to claim, with measured if frustrating hilarity, that “although I’m not really a writer, I’ve had many things published in my name…The whys and wherefores of all this escape me, as they would anyone. But I’m not writing this to resolve them.” Perhaps to reconcile his disavowal with his profession, or to suggest a possible reconciliation, the narrator admits on the first page that Nicasio Urlihrt is an anagram for Hilaríon Curtis; it’s hardly difficult to notice then, that these are both anagrams for Luis Chitarroni. The alphabetical acrobatics suggest that the text perhaps really is an experience of real-life-writing, rather than just very close mimicry.

So if the adoption of not-quite-true, reassembled personalities is one way to write life while still living life, and to not let living become an obstacle toward the practice of writing, the prose also takes on the work of remixing and reassembling. Sometimes this happens locally: for example, two paragraphs after reminiscing about his clique’s self-designation as “the slow ones,” the narrator returns to the theme, but with a subtle and important shift in tense: “Because we’ll be late in arriving, because we are loath to depart, because we don’t care that we’ll be late.” The transformation from paste tense to anticipated future describes the present lovingly, the experience of a community loath to move forward. Together, these passages support the claim that yes, to live in the present is more valuable to write about it retrospectively from the future. In a less local register, Chitarroni returns to certain scenes across the course of the novel, and although they’re a little more difficult to identify, relying more heavily on the readers’ memory, the rewards and pleasures of noticing these passages are commensurately great. That pleasure balances the frustrations of searching for narrative, searching for cause and effect: instead, it’s differently pleasurable to identify a theme—several themes—and their variations.

The emotional effectiveness of these moments is in both this kind of recognition within the text and the hope of recognizing yourself in the characters. That double identification is essential in the genre of the “variation,” at least, as practiced by Chitarroni. It is a mode of life-writing that distills personal experience into the blocks of language that comprise it. As time passes, these elements—of a sentence, of a literary clique, or even of the name of an individual—rearrange themselves into new forms while preserving some trace of the original content. The moment of recognition involves the reader insofar as she is compelled to reach back into the elements of her own past, and begin to recognize these characters or these lines as shaping her lived experience beyond the pages of the book. In this way the claims of the text take on a life of their own, and the anticipated characters “will turn out to be ourselves.”