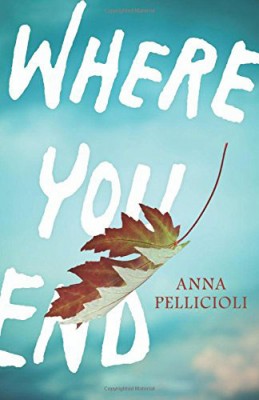 WHERE YOU END
by Anna Pellicioli
Flux, 299 pages

The trends of paranormal characters and dystopian worlds have played out in young adult fiction, and just in time for Anna Pellicioli to step in. Her debut, Where You End, is a riveting work of contemporary fiction that will captivate an audience of both teens and adults.

According to the blurb on the back cover, Pellicioli’s book is about a girl getting over a passionate first love. The Library of Congress summary on the copyright page would have us believe it’s about a girl who is blackmailed when she ruins a museum sculpture. Yes, Where You End is about heartbreak and blackmail, but it’s not the best way to summarize the story. The book doesn’t have a simple, common problem to solve with a few dramatic encounters or wrap up neatly with a life lesson. There’s more depth than that.

A seventeen-year-old photographer, Miriam, is caught in emotional turmoil after seeing her ex-boyfriend with a new girl through the lens of her camera. Desperate to do something, anything, Miriam pushes a Picasso statue in the Hirshhorn Museum off its base. It falls and Miriam runs, glancing back to make sure she hasn’t been seen. But a witness follows Miriam to her next destination and asks Miriam to take photos for her, in return for her silence. Miriam gets sucked into the blackmailer’s world and learns that you can’t always know the whole of a person if you’re only on the periphery of his or her life.

Miriam’s voice is rich and real. She acts on her feelings, without thinking, but she can’t always comprehend these feelings. She pushes the Picasso sculpture because she can’t process her heartbreak and the betrayal of seeing her ex with someone new. She isolates herself from her parents and friends because she can’t share any of the stress of her problems, which only makes everyone focus on her even more. To cope, she escapes into her photography, going out late at night to take photos to help her get back to sleep.

Miriam has ended her relationship with her first love and all of her other relationships are changing: a childhood friend suddenly sees her in a different light; her parents don’t understand her need for privacy; her guidance counselor doesn’t think she’s living up to her full potential. Miriam struggles to come to terms with it all while being on the cusp of graduation, feeling that exhilaration of the whole world being hers for the taking. Miriam’s future hinges on the blackmailer keeping quiet — if Miriam is discovered as being the culprit of the museum vandalism, her chances of greatness in the art world will be destroyed.

The dialogue, both internal and spoken, rings true. Pellicioli knows teenagers and shows it in her writing. She also knows Washington, D.C., the story’s setting, which gives it an added dimension of vivid realism. Pellicioli takes readers to the National Mall, up the steps of the Lincoln Memorial, and around the streets of D.C. at night. Her deft writing makes the almost-three-hundred-page book breeze by, but there is also poetic beauty in her words.

The storyline of the museum vandalism never garners much attention and fails to achieve a satisfying resolution, ending with an open question of the consequences for Miriam. This vague ending is disappointing because it is set up as such a high stakes situation. Elliot, Miriam’s first love, plays a very minor role in the book. He only shows up in a couple of scenes, and is not given the importance one would expect considering Miriam’s implied heartbreak.

While the two main points mentioned in the book’s summary aren’t explored to their fullest potential, the unexpected secondary stories of blackmail and of changing friendships are well-developed and wrapped up neatly by the end of the book. It’s refreshing to read a young adult book with a unique voice that doesn’t focus on romance and that demonstrates how teenage girls can have interests beyond love and social life. Pellicioli is as much of an artist as her character, giving us snapshots of Miriam’s world through her words.