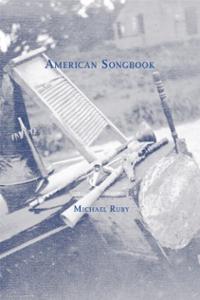 Imagine a road trip across America, probably in the summer, “in the good old plastic gasoline / Pell-mell summertime.” Of course, music will be an essential part of the journey, probably radio hits. Headed East, perhaps, the lyrics of each song traverse both geography and time: a path paved in words. The lyrics to these songs linger in memory, but they’re also so ephemeral—though the words remain, their thrill often fades along with the little experiential details that make any such trip unique. Between the transient intensity of experience and the permanence of a material archive, exists poetry, transcription of verbal and nonverbal song on a page, lending it a more lasting presence. 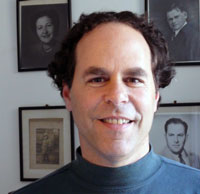 Each poem in Ruby’s latest collection, American Songbook, riffs on or responds to a canonical piece of American pop music, and appears chronologically, spanning the American radio-waves from the 1930s (Bessie Smith’s “Pinchbacks” to the cusp of the twenty first century (Rob Thomas and Carlos Santana’s “Smooth”). This sequence of poems presents a narrative of personal experience, but the individual experience of pleasure in pop music is at the same time an experience of the twentieth century.  And, commensurately, there’s great diversity in this collection, it “contains multitudes,” invoking musicians in the southern blues tradition, to the rebellious grunge of the northeast, from Woody Guthrie to Biggie Smalls. The verse itself, although more subtly than the subtitles of the poems, includes flashing and vivid experiences of American history, too, from strikes in Delaware in “The Desert Blues” to the frogmen of “Folsom Prison Blues.” More expansively, however, and more affectively, the semantic static that fills these poems, the language that Ruby brings to the remembered lyrics, evokes the collective experience of listening to music on the radio over the decades. It’s not just one person’s experience of these songs, but a national history formed through the community that has loved this music over time.

Ruby’s language prioritizes aesthetic pleasure over semantic sense, but it’s not devoid of form. Through the collection, Ruby returns time and again to certain formal characteristics. In contrast with his semantic playfulness, these formal characteristics are all the more powerful. The most vivid of these techniques is Ruby’s use of the acrostic, mimicking the mind that wanders away from the line of song as it listens to lyrics. In many poems, the first word or words of each line are the lyrics of the song that gives each poem a title. So, for example, his meditation on Elvis Presley’s “Can’t Help Falling In Love” looks like this:

The song is still there, in the background, but the noise of words, like radio static, draw the mind away from the song’s meaning and into its own associative wanderings, to be brought back with each word drawled by Presley’s voice, and emphasized by the compelling force of the line-break. The acrostic playfulness is probably the most reliable formal element in the collection, running like a backbone through Ruby’s twentieth century. And if this observation spoils the joke, or preempts the pleasure of pattern recognition, it’s of a piece with the difficult, interrupted pleasure of recognizing the song: It’s impossible to sing along with these because Ruby insists that the memory of music will be the memory of experience, sometimes individual, sometimes cultural.

The most memorable example of this technique, and its consequences, is Ruby’s two-part reworking of Jimi Hendrix’ “Star Spangled Banner,” already a reworking of the national anthem. Ruby includes two versions, and while they both generally follow the acrostic formula, the first more effectively replicates the expansive, rambling experience of Hendrix’ improvisations at Woodstock in the summer of 1969. As with much of the collection, this poem too is an acrostic. Here, however, to mimic the drawn-out tension of Hendrix’ riffs, Ruby does not rely on words, but on the blankness of the page, the lines between the double-spaced riffs. Thus, in the occasional moment when he uses normal spacing, for example, when he begins three lines in a row with “the twilight’s” or “the rocket’s” or “the bombs”, the poem invokes the sense of friction so memorable the guitarist’s on-stage riffing.

This song does most effectively what the other songs aspire to do—that is, use language to mimic and expand on the experience of sound. What makes it’s success possible is, perhaps, the fact that Hendrix’ solo empties the anthem of its words in order to critique that patriotism of the late sixties. Of course, listening to Hendrix, the words are already ringing in the listener’s memory and Hendrix’ virtuosic digressions display a rebellion latent in the American character. In a like manner, Ruby’s poems, and this one in particular, very nearly empty words of their meaning. The risks of doing so in the context of the American twentieth century, a high-stakes historical context, give the experience of this song an appropriate thrill.

But instead of offering a sort of empty pleasure, Ruby’s collection insists on contemplating the conditions for such a thrill: The thrill offers the possibility of connecting the listener to a singular moment in history rather than the endless repetition of popular culture. Ruby represents this in his collection by giving his homage to Hendrix two iterations, a doubleness that makes it unique among the collection. And where the firs version went in to replicate the thrill, the second version more straightforwardly critiques what a thrill is: “The thrill pines for a solvent…The thrill operates in an icy smoke…The thrill performs for a small audience.” Ruby still stuffs each line with words that make more pleasure than sense, but his inclusion of observations like these, with their provocative insights, derive great power from their contrast. Although the second version of the anthem is a pale shadow of the thrills of the first, the pairing makes an important claim on the relationship between aesthetic pleasure and a historic moment. Although the singular historic moment can’t quite be reproduced, its imaginary existence in collective memory gives the experience of music its thrilling quality, particularly music from the past. Furthermore, that thrill tends toward dissolution, ephemerality, and is best savored with intimate company. Contrasted with pop music, poetry offers itself as a more stable entry to those pleasures.

Near the end of the collection, Ruby turns to a few rap lyricists, which would present a special challenge for not only the premise of the collection, but also the experience of poetry in the twenty-first century. What experience of music can poetry riff on and expand when the music is itself, increasingly based in language? It’s a perplexing moment in cultural history, and less thrilling than it is melancholic—that is, it is sad, but not exactly nostalgic, since the moment isn’t even quite past. Imagining, for example, the memory of the nurse taking care of Tupac Shakur, Ruby writes that “her replacement is gone, her replacement’s replacement hasn’t heard of me, it hurts to reminisce about a replacement.” The palliative is no longer effective, no longer fits the present moment, and the pain persists. If, through the course of American history music had soothed the nation’s aches and pains, calmed its less-pleasant memories, and poetry had offered a more lasting memorial of that pleasure, can it still do so today? And what form will it take?