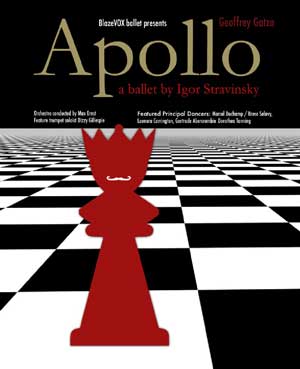 Geoffrey Gatza’s Apollo is an all-out assault on the reader, like facing an opponent who senses you’re about to wilt and so presses the action. Every time we think we know what he’s doing, another surprise comes our way. And this is how good conceptual poetry should be—not just the simple execution of a clever conceit but a text that threatens at every turn to burst from the inside out and take the reader with it but never does. Taking the shape of a souvenir program for a one-night performance of Stravinsky’s ballet of the same name, the book contains a myriad of Dada-like exercises: poems generated by a John Cage-like method of assigning words to each square on a chess board and to each piece and then playing out the game between Marcel Duchamp and then US chess champion, Frank Marshall, at the Chess Olympiad in Hamburg in 1930 (accompanied by pictures of each position and a cat), an Arthurian legend based on the Lady of Shallot, a three-act play where Duchamp somehow manages to play himself as Rrose Sélavey (his female alter-ego), and a business letter to the director of the Albright-Knox Art Gallery, who kicked the author out one day for the mysterious offence of carrying an umbrella—a moment so Duchampian it is the perfect coda to this ready-made text. In “Fifteen Hundred Hours,” Rrose Sélavey says, “The consciousness that bound these obscurities. . . together/ was overgrowth.” It is a perfect metaphor for the entire collection, for this paean to Gatza’s modernist heroes who perform his ballet: Duchamp, Sélavey, Max Ernst, Gertrude Abercrombie, Leonora Carrington, Dorothea Tanning, and Dizzy Gillespie. 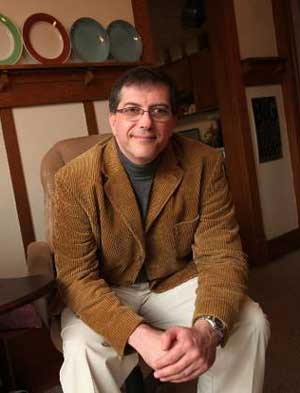 Gatza, in an interview with Loren Kleinman in the Huffington Post, argues that the avant-garde in poetry “means to read and incorporate into your poet self everything you can get your hands on.” To Gatza, conceptual poetry—with a lower-case “c”—is characterized by cross-disciplinarity and intertextuality—what I like to think of in my own work as working-class baroque. Gatza and I are cut from the same cloth as regards class. For those of us raised in an environment where poetry and art is considered a waste of time under the very best of circumstances, our desire to be a part of an aesthetic world we don’t quite belong to is often attended by a general lack of direction. There is no map; there is no one to ask for directions, to shape our artistic educations, so we do what we must; we throw ourselves into everything at once, hoping to discover the path in the dense woods. This approach is often not very systematic, but it can give rise to a very broad awareness of artistic production; that is, art is a series of equivalencies not specialties. In Apollo, for example, poetry is seen through the lens of dance, dance is understood as painting, painting becomes music, music is myth, myth is chess, chess = ballet, and ballet, war—and on and on. It’s not necessarily baroque in the way we often think of in poetry, which usually has something to do with style, a certain self-awareness of poetry as poetry. If Gatza’s poetry is self-reflexive, it is so only in a matrix of other aesthetic and cultural signifiers, not necessarily because it has an overabundance of rhetorical and figurative devices—although there is no prohibition against this kind of thing either.

As I said above, this manuscript is really a love letter to a certain brand of modernism—especially that of Marcel Duchamp—but it’s not Duchamp the artist who reigns here but Duchamp the chess player, the titanic figure who turned his back on painting:

One does not
Simply choose
To stop painting.
Analogous to
Breaking one’s leg.
It just happens. (“Astronautica”)

As a patzer myself, who has spent countless hours studying a game for which I’ll never be more than a wood pusher, it was easy to fall under chess’s spell once again. Chess is the backbone and the blood of this text. In the introduction, Rrose says, “The chessboard will be our medium to meet the divine/halfway”—the chessboard as Ouija board. In fact, the Prologue, entitled “The Birth of Apollo,” is not about the birth of the sun god at all but about the birth of chess, about how Apollo went to Euphron to design a game that would make the dryad, Caïssa, fall in love with him. Sadly, he only partially succeeds:

He left Caïssa with her game,
Becoming the muse of chess.
And Apollo became the very
First chess widow in history.

The ballet ends with Duchamp and Rrose engaged in a chess match—the third time the Marshall/Duchamp game has appeared in the text—and the revelation of Duchamp’s Étant donnés, the final masterpiece he worked on in semi-secrecy during the twenty years he supposedly “quit” painting.  It is actually quite a successful ending to the ballet, especially when it is compared to the absurdity of Gatza’s expulsion from an art gallery, which follows in the coda.

The book is from start to finish an act of subversion, which is not something I say lightly, so much so it demands I must revise what I said earlier about Apollo taking the “shape” of a ballet program. It doesn’t take the form of a ballet program; it isn’t a poetry book walking around in the garb of a souvenir. It is a program for a closet ballet I now feel I sat through. If you’re looking for a “book of poems,” Apollo might not be for you, but if you’re looking to have an experience of poetry, of how play can be deadly serious, then take your seat because the lights are dimming and the orchestra is tuning up.