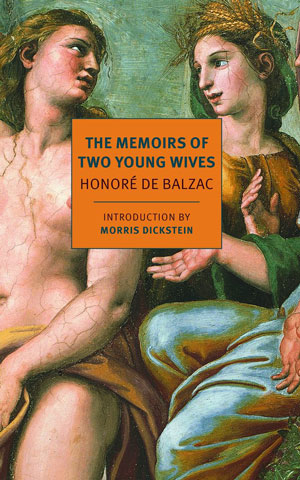 The classic coming-of-age novel tells the story of a young boy coming to terms with the man he is about to become. Over 175 years ago, the great French literary seer Honoré de Balzac composed a rather untraditional version: in his novel, The Memoirs of Two Young Wives, Balzac applies the traditional arc of the bildungsroman to two female protagonists in order to present two ways of life—the passionate life and the tranquil life. In doing so, Balzac reminds readers of the elusive nature of happiness, regardless of one’s way of life, and what it means to love and be loved.

Balzac was expert at capturing the French society of his time. He wrote over ninety novels, but The Memoirs of Two Young Wives never received the attention as a beloved work like Pere Goriot. Additionally, unlike his more famous plays and novels, The Memoirs of Two Young Wives has a small cast of characters and follows the epistolary form. Commentators and scholars have theorized that this novel presents the tensions between pleasure and duty that Balzac himself faced. Moreover, much of what the two protagonists, Louise and Renee, struggle within their 19th-century world resonates in 2018. For example, are we happier seeking out the hustle and bustle of society or the peace of the countryside? At a certain age do we feel it is simply time to grow up and get married, or are we truly in love? Do we follow our own ambitions or do we put them to the side? What will make us happy?

The novel begins with Louise excitedly writing to Renee, her closest confidant, that she, too, is now leaving the Carmelite convent where both of them had lived and formed their bond of friendship. Louise and Renee then each vow to write each other and describe every detail of their lives.

In these letters, Balzac describes two ways of living, though he leaves it up to the reader to make the final judgment about which, if either, is necessarily “better.” Louise is full of passion while Renee resigns herself to what she sees as her womanly duties—marriage and motherhood. At different points in the novel, each succumbs to jealousy of the other’s way of life. Louise initially is frustrated that the men of Paris do not take more of an interest in her. What must she do to get their attention? How should she balance her intellect and beauty? How can she be loved? She is frantic to be adored. To Renee, she writes that “[w]hat [she] has read of modern literature is centered on love . . . since [their] destiny is shaped wholly by men and for men . . . .” Her introduction into Parisian society my make a 21st-century reader blush at how gendered Louise insists her role in society must be, no matter how cunning and clever she is and how much she recognizes her own intellect. Louise writes to Renee that “[a] young woman counts for nothing at the ball: she is a dancing machine.” But Louise is not impressed with a man of “great talent,” whom she finds “so deeply occupied with himself . . . that [she] concluded that . . . women must be mere things, and not people . . . ” She wants a passionate love and to be adored, though she is not willing to be a mere “thing” for any man, and she is frustrated that in society “[w]omen count for very little . . . .” Will the adoration of a man make Louise happy? Perhaps, temporarily it will.

Renee, on the other hand, agrees to an arranged marriage to a man she eventually grows fond of, especially after he makes her a mother. Louise sharply criticizes Renee’s decision to lock herself into such a life, insisting that she is “simply leaving one convent for another!” But Louise later idealizes Renee’s prosaic, country life and three children. Renee’s husband moves through the ranks of government office with help from Louise and her family, and Renee is content to help move her husband’s political career along but never overshadow him. Will children make Renee happy? In many ways, they do, but she also experiences great anxiety and fear when her oldest becomes ill, though he eventually recovers.

Louise takes two lovers, each of whom she eventually marries in turn. The first man, Felipe, is a former Baron in exile from Spain. He adores Louise and respects her intellect. Felipe loves her much more than she loves him, but this is what she thinks she wants. Renee is quick to tell her that she does not think Louise truly loves him, and in the end, Renee is right. Felipe dies, and Louise insists it was her fault. Later, Louise marries a man four years her junior. The marriage is a secret, and they live in isolation. Louise becomes jealous, believing her husband to be having an affair, and ultimately makes herself ill with consumption by staying outside overnight. When Louise dies Renee feels even more desperately that she wants her children around her. They have become her life—the life she described to Louise in as much as detail as possible.

In the back-and-forth of Louise and Renee’s letters, Balzac reveals how happiness can feel artificial and how dependent it is on others. Louise writes to Renee that “what society least forgives . . . is happiness, and so it must be concealed.” But whatever happiness the two women feel at different moments in their lives, along with their frustrations, they are free to express in their correspondence. Indeed, their correspondence and friendship become a type of happiness that does not need to be concealed.

Near the novel’s beginning, Louise writes to Renee that she was told that “good taste means knowing what mustn’t be said as much as what may be.” Such good taste does not need to be heeded in the women’s correspondence. In these letters, Renee and Louise do not need to shy away from certain subjects just as they do not need to hide their happiness (or unhappiness) from one another. When the rules of etiquette fall away and the women can be honest with themselves and each other, perhaps that is when and how they find their happiness.

After Louise dies, Renee writes her husband that her “heart is broken.” It seems fitting that the novel should end with a broken heart that is not caused by any romantic attachment. Rather, Renee’s heart breaks because her confidant, the source of her true happiness, dies. By the end of the novel, it seems as though the elusive happiness and love that both women craved was there all along in their correspondence and friendship. Through their correspondence, the women achieved a balance between pleasure and duty, fantasy and reality, passion and tranquility. Perhaps that balance is why their friendship was tied up with their happiness. Perhaps Balzac’s point is that these tensions between pleasure and duty, fantasy and reality, passion and tranquility are necessary for happiness.

Ashlee Paxton-Turner is a native of Williamsburg, Virginia, and graduate of the University of Pennsylvania, where she was an English major with a creative writing concentration. A former Teach For America corps member in rural North Carolina, Ashlee is now a lawyer and graduate of Duke University School of Law.