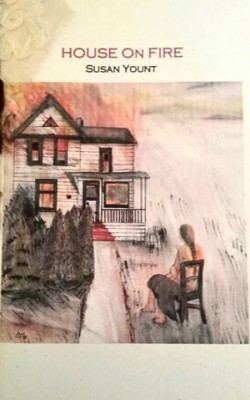 Susan Yount’s House on Fire begins with a storm, more specifically with a lightening strike that splits the “sovereign catalpa”—an intriguing symbol for the fracturing of the narrator’s self, which makes us question every “she,” “her,” “I,” and “you” we encounter in the poems. The catalpa tree is mentioned four times: twice in the first poem, once in the third poem, and then again in the final poem. In “Growing Up on a Cattle Farm,” for example, the speaker says, “Cyclops drops splatter the concrete walkway / tumbles over catalpa’s wormy roots.” These beautifully euphonious and sibilant lines hide within them deeper meaning. For instance, the image of the Cyclops—the mythic creatures who toiled in the fires of Hephaestus’s volcanic workshop—is important because it invokes the father, who later in the book is likened to a devil that burns down the house and the family that lives in it. And “wormy” is an appropriate adjective because catalpa trees are often home to the caterpillar larvae of the catalpa sphinx moth, but it also takes on another valence when we realize that its secondary purpose is to foreshadow the death of the narrator in the final poem.

The image of the catalpa is developed further in “Father Was a Hard Man,” which also reinforces, albeit obliquely, the image of angry Polyphemus in the Odyssey. The speaker says,

We spotted an island with fruit and goats
and tossed ourselves
across the ragged boughs
of a catalpa tree.

We come to understand the necessity for this Odyssean escape fantasy, where the girls end up together far from their father on an island reminiscent of Circe’s wondrous isle, when we realize that the narrator was sexually assaulted by him: “two fingers yeast infection fist fuck” (“Father’s Hands”). 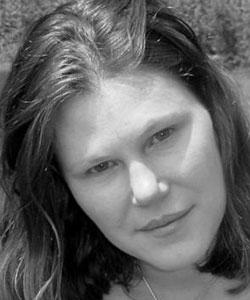 In “Spontaneous Symmetry Breaking,” a poem whose syntax breaks, halts, and collides with itself, we get the final incarnation of the catalpa image: “Her open window looked sad rose sunglasses twisted twigs seedlings grass / catalpa roots sideways in a ravine.” The narrator dies in a car wreck and it is intimated, I think, that it was the result of suicidal behavior. The lightening strike splits the narrator apart, divides past from present, cleaves life to death and gives shape to much of the book.

The first six poems form a kind of set that leads up to the title poem; all are about the hard work associated with farm life. These poems remind me of Joseph Langland’s sacrifice poems, which often center on the realities of dealing with farm animals—when they die, when they must be killed, and when they show their darker side. The reality of the farm as described in Yount’s poems, however, is largely but not totally in the service of setting up the sub-narrative of sexual and physical violence in the family. (One of Yount’s other obsessions in her poetry, and it is one we share, is about the nature of work itself.) In “House on Fire,” which is set apart from the other poems by its reddish, flame-colored print, the speaker says, “The house is kindling . . . The house is a pyre . . . The family aflame . . . Her father, a devil . . . Your house ablaze, get out.” These simple declarative statements capture much of the desperation of a family being held hostage by a father who has become a force of destruction. The burning house is, of course, the central image of this book, but it is also important in its sequel, Catastrophe Theory (Hyacinth Girl Press, 2012). For example, I count at least nine references to houses on fire in Catastrophe Theory­—ten if you count the cover image—and those are only the direct ones. There are others that are more indirect that also suggest burning homes. The phrase “house on fire,” with very little variation, appears four times in the latter text. These two books were released in reverse order due to the vagaries of publishing, but no harm was done to my enjoyment of the earlier text. In fact, these two chapbooks combined would make for a powerful debut collection.

In the prose poem, “Notes on Despair” we begin to deal with the aftermath of these traumatic experiences, with guilt and/or blame. The speaker says, “She never worked as hard as her sister. Maybe that’s why it / happened . . . His teeth. His hands. His fist. His dick. She is feeding them. She is ten. She cannot tell.” The “she,” as I mentioned earlier, is the narrator herself, who is trying to rationalize why her father targeted her. She fears it might be punishment for her lack of industry as compared to her sister. But in “Almost Dark” there are no rationalizations, only anger: “and I squat thinking of ways / to kill him.” But by the time we get to the final poem, her feelings have become a bit more complex—blame and guilt seem to be beside the point: “I’m not sure what is more pathetic you trying to decide if the poem is blaming you / or her and you and I and you or I again can’t remember things or don’t care” (“Spontaneous Symmetry Breaking”). And the syntax is such that it is quite difficult to pin down just who “you” is. Clearly, “you” can be the father, but “you” could also be the speaker—a self-incrimination designed to force her to move beyond the past, to “Stop writing / about your father” (“The Oracle”).

House on Fire is rugged, self-aware, and raw; it champions those who take blows from all sides and come out swinging wild even when they have little hope of escape—maybe especially when they have little hope of escape. It’s great success is that it holds some portion of anger in reserve—avoiding the too-easy notion of mere acceptance—while still managing to find a way to move forward and make a life worth fighting for.