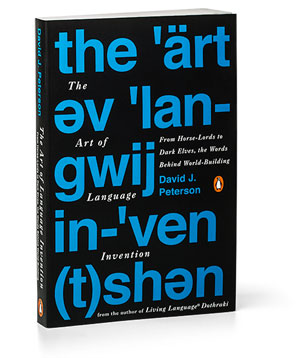 A Conversation with David J. Peterson
author of THE ART OF LANGUAGE INVENTION
Penguin Random House

If you love fantasy and science fiction films and television programs, chances are you’re familiar with the work of David J. Peterson, the masterful conlanger, inventor of languages. While best known for inventing the Dothraki and  Valyrian languages for HBO’s popular series Game of Thrones, the University of California San Diego graduate has created more than forty languages in his film and television career. You can find Peterson’s original languages in such Marvel Studios films as Thor: The Dark World and Doctor Strange, as well as over half-a-dozen television shows, including the critically acclaimed Penny Dreadful.

Peterson is one of the co-founders of the Language Creation Society, and he is the author of two books, Living Language Dothraki and The Art of Language Invention.

In this interview, Brian Burmeister asks David J. Peterson about what led him to language creation, what his process looks like, and what advice he has for novice language creators.—Nathaniel Popkin, ed.

BB: Your degrees are centered in linguistics, but what led you from the study of language to choosing to create new ones? 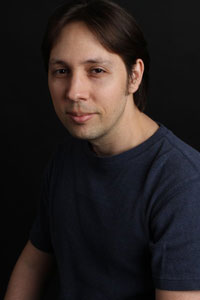 DP: Ultimately, it was the study of languages in general. Learning as many languages as I could—just for fun. I was doing that at the university. I had taken Arabic and Russian, and it was advertised in my dorm for a student-taught class on Esperanto. So I took that, and that was the first time I had ever heard of a person inventing a language. The semester after that I took my first linguistics course, and it was in that class I really put everything together, and I thought it would be really interesting if there was a language that combined certain morphological systems and marking systems. That was when I thought I could make a language—and I did. But rather than having it be for international communication because I thought Esperanto had pretty much won the day for that, I thought, what if I just created it for myself? Just for fun. So as soon as I had that idea, I was off. I thought I was the first person ever to do so. When I met other language creators online, finally, I discovered there were many others who had done so. Not only that, but they had been doing it for longer. And they were better. At that point there was a lot of learning. And I kept at it, just because I loved it.

BB: That first language you created, was that something you would speak with your friends?

DP: I think, in the beginning, I had the idea that my girlfriend and I would speak it. I think that was more of an excuse, something to justify the exercise. I did show it to her eventually, but she wasn’t interested in speaking it. But I kept with it just because I enjoyed doing it.

BB: In terms of language creation in general, what are some of the most difficult issues that you face?

DP: Definitely creating a verbal system. Especially if you’re creating a naturalistic language. It’s very, very challenging. The naturalistic languages I create, they evolve over time—the evolution is simulated. With nominal systems, it’s fairly easy. They’re fairly static. Honestly, verbal systems change with every single generation. People thirty years apart don’t use verbs exactly the same way. Consequently, on a macro level, the systems change radically every hundred or so years—which is nuts compared to nouns that are kind of like trees compared to rivers. To create something like a verbal system when you know it’s not going to stick around for a long time, everything you’re creating is going to be the product of something new, so it’s hard to get it just right, and create the entire full system, to have all these changes embedded with them, and not to get lost—that’s the hardest thing for a language creator. It’s like, all right, you created a system and this is your time X, and now you have time X minus 100, X minus 200 and so on. With the verbs, it’s like, wait a minute, are they still doing that? Or has this progressive suddenly become the regular present? Has this future become a subjunctive? That’s the hardest part.

BB: Of the dozens of languages you’ve created for TV, movies, and video games, do you have a personal favorite?

DP: Definitely the Irathient language I created for Defiance. I love everything about it. I love the grammar I set up for it, even though it’s a bear to use. I love the writing system. I love the sound of it—I absolutely love the sound of it. And I also like how words are created. It’s one of my favorite methods of word creation, the use of really large noun classes. It just hit so many notes that I really respond well to. It’s my absolute favorite.

BB: What does the process of creating your languages look like? Are your time and efforts consumed by a particular language for several weeks? Or is it a longer process than that?

DP: It’s kind of like thirty-five percent of the work happens in a very short amount of time. After that, the rest of the work takes place over the course of your entire life. The most intensive part is setting up the grammar. Making sure that it works. Making sure that it sounds good, and that everything tests right. And that takes a lot of work in the beginning. After that, it’s just vocabulary creation. That’s the type of thing that’s very occasional, either whenever you need it or whenever you want to. And literally, it’s going to take the rest of your entire life because you’ll never create as many words in a created language as there are in the natural languages of our world.

DP: I love when fans get tattoos. I’m a big fan of tattoos, but I would never get one myself, so it means a lot to me when they get a tattoo of something I created—you know, permanently etched on their body. I find it to be absolutely extraordinary. Just extraordinary. And there have been some really good ones.

BB: For those looking to learn more about language creation, can you give us a preview of what awaits your future readers in your book The Art of Language Invention?

DP: In The Art of Language Invention, I initially set out to teach everything you would need to know about language creation. Then my editor told me how long they wanted the book to be—or how short, in my opinion. (Laughs.) It’s not that. But at the very least, it will give you the basics. Assuming a spoken, naturalistic language. Although it does have some information if you’re doing something for aliens or if you’re doing a sign language, for example. It’s a very good place to start out, to figure out what the rules are, to get something that has a naturalistic result, that looks like the languages we have here on Earth. Also, in the beginning, it gives you a short history of the modern conlanging community, which was important to me, because that’s where I came out of. The conlanging community that was born, really, on the Internet in the 90s. Especially at that time, there was nobody who was famous, there were no books on this subject. And it was just an email listserv where anybody could send email messages, so everybody was pretty much equal on there. It was a wonderful way to learn, and I made a lot of friends along the way. That’s where I learned to do everything that I’m doing now, and why I am the language creator that I am today. Joining that community changed my life entirely.

BB: What would you recommend to the person who might not have very much experience, but has the enthusiasm to give language creation a try themselves?

DP: First of all, that listserv is still there, and I’m still on it. It’s been there since 1991—so 2021, coming up, it’s going to be 30 years, it’s crazy. I was a newcomer when I joined. So you can always do that. That was the first conlang community, but there’s tons of conlang communities now. There’s tons everywhere. On every different platform. A nice place to go is the Language Creation Society’s website, conglang.org, because that’s going to point you in a bunch of different directions. You can collect all information about anything you need to know about conlanging, so if you start there you can get to a bunch of different places.

Brian Burmeister teaches communication at Iowa State University. His writing has been nominated for the Pushcart Prize and Best of the Net. He can be followed on Twitter: @bdburmeister.