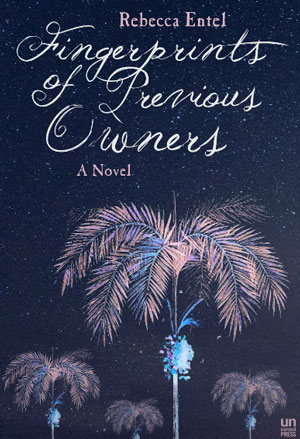 “The narrator of this book is a Caribbean woman. You may have noticed that the writer of this book is not,” Rebecca Entel notes in a preface to Fingerprints of Previous Owners, her novel set at a resort built on the nettle-choked ruins of a former slave plantation. Alluding to her research and credentials as a scholar of nineteenth-century American literature, Entel does more than attempt to deflect criticism for cultural appropriation. She declares her investment in this story, as well as her intention to free her characters from a colonial narrative frame.

She begins with Myrna Burre. Entel endorses Myrna’s authority by locating the story’s point of view in this islander who’d “never arrived here from anywhere.” When we meet her in the novel’s opening lines, she and the other “A-Y-S” staff (At Your Service, pronounced “eeeeyes”) are gathered on the beach, wearing white sheets over their uniforms, to perform a compulsory pantomime of a native welcoming ceremony for tourists who are aboard a boat named, with casual tactlessness, The Pinta. (Their baggage is brought by The Nina.) “A team of people with the name of the resort scripted across their chests would appear, arrange its bodies as prosthetics for whatever they needed to do,” Myrna reports, indicting by defamiliarizing this arrival ritual, in which a staffer playing Columbus distributes “coins of small value” for the tourists to trade for necklaces and candy.

As “one of the maids they heard but didn’t see” sweeping crabs from the pool deck with her wire broom, Myrna is perfectly positioned to scrutinize the fictional island called “Furnace” (a corruption of Ferdinand and Isabella) by paying guests, and “Cruffey” by residents (many of whom, including Myrna’s mother, share the surname). Publicly, she sticks to the scripted bland descriptions of buffet meals and perfect weather and a Jamboree featuring “our local steel drum band and native women selling native crafts”). But privately, she makes us privy to fraud she detects: the “local” band playing “Trinidadian songs on Floridian-Jamaican drums,” the hour-earlier tourist time zone, a tromp l’oeil coral reef painted on the pool floor, the “native” label that doesn’t fit anyone she knows. 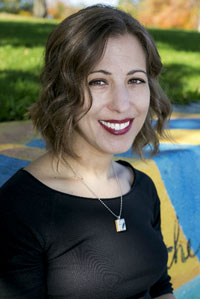 Clearly, Entel has done her research. Details like these, revealing the resort’s flimsy façade—“the brand-new strapped over everything like duct tape”—and the subservient stance of employees laboring in a service economy, ring true to my work as a maid at a Spanish colonial-style resort in Arizona. Where she exaggerates—for ironic, if not comic, effect—she exposes visceral truths. Her credibility is evident in choices she makes to craft this story. By amplifying the dissonance between the island’s different versions—seen and unseen, mythological and historical—Myrna’s point of view compels the plot to pursue what’s hidden: Cruffey Island’s past, which is to say her ancestors’.

Myrna’s life—and livelihood—hinges on this hidden history. “Say the word estate at work and look down at your palm for your firing papers,” she warns, addressing the erasure at the root of this story. The Cruffey Plantation is lost to history: missing from the resort map, an inland life forgotten or unspoken by the elders. But even before the plantation, Myrna notes, the island’s identity was misplaced by the official archipelago map depicting their home as “a dot named twice, neither time by us.” If one purpose of a map is to lay claim to the truth, this map that decorates the Furnace Island guestrooms robs the islanders of agency, casting Myrna’s family and friends as inhabitants of one of many “scattered seeds floating away from the finger of Florida, that imperative pillar to our point of exclamation.”

Without facts or artifacts to anchor her, Myrna is at sea, her future uncertain. Her college plans derailed by the need to support her mother (mute with grief after her husband’s death and son Troy’s relocation to “the capital”), she goes “inland, back in time, instead.” She searches for tangible proof of her ancestors’ existence in the stones erupting through the soil—“stones my ancestors…had quarried and carried and packed in place, like planting gravestones.” This digging and accounting echoes the work of her deceased father, the island’s dentist, who remembered his patients by counting their pulled teeth, “all the holes on the island.”

And so Myrna’s second, secret, shift begins, as she slashes blindly through the thorny haulback with a machete, looking for the abandoned plantation’s foundation walls. This physical labor is sticky, dusty, bruising, and stinging. It rivets the reader to her actions with sensory detail, as she excavates, like her father once did, to “find where the pain was coming from…and to dig out the source of it.” Feeling her way, Myrna makes a mental map of the estate to match the one she’s discovered in a copy of The Cruffey Plantation Journal 1833, stolen from a visiting tourist’s room. In a perfectly plotted scene, Myrna finally enters the estate through the kitchen—literally, a “place of fire, of food, of sustenance, of labor” and symbolically, the place where race, gender, and social class intersect—and finds a tangible link to the written record of a one-armed enslaved woman named Tildy.

The stolen journal’s owner is Jasmine Manion, an African-American woman from Wisconsin who owns the consignment shop where the old book turned up. Jasmine has hired Myrna’s cousin Lionel to give her an unofficial tour of the other side of “paradise”: Junkful Beach, called “Scruffy” by the kids, “mangy with brush, shore scalloped with choppy water, and flotsam she wouldn’t believe washing ashore from across the Atlantic.” Jasmine’s part in the novel’s unsettling climax, which I won’t spoil, is just one example of the way Entel keeps digging for complexity, through the ways in which her characters’ roles and lives intersect.

Entel makes great use of the landscape as a psychological setting, from the thorny inland concealing truth to the wind-torn, trash-filled shore that residents scour, feeling “lucky to collect the junk.” Writing against a gendered tradition of travel narrative in which men pose as conquerors and women journey to self-discovery, she ties Myrna’s personal quest to a larger story, expanding her vision with a series of first-person “bench stories” that fill narrative holes as they accrue on a story-telling site built from the estate’s “took apart walls.”

Poet Derek Walcott proposes, in his illuminating essay “Isla Incognita,” that, in order to see clearly, we must “proceed backward from knowing, from all the stories [we’ve] been told about islands.” Both in spirit and in its structure, Fingerprints of Previous Owners follows this profound advice to rediscover the island of the author’s—and the reader’s—invention. Of course, the prickly political question of who gets to write what will not, and should not, be settled by Entel’s sincerity. And you may have noticed that the reviewer of this book is not a Caribbean woman, either. But in my view, Entel’s novel is brilliant. Through a series of strategic narrative choices, she both inhabits and interrogates the island she created, demonstrating how fiction can expand a reader’s empathy and, even, a writer’s authority.