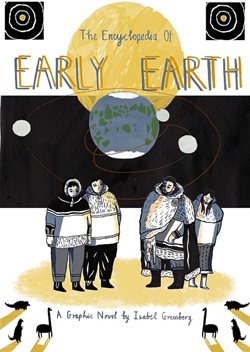 THE ENCYCLOPEDIA OF EARLY EARTH
by Isabel Greenberg
Little, Brown and Company, 176 Pages

There is no sole way to tell the story of our planet. Whether one chooses to uphold a belief rooted in science, religion, or some amalgamation of the two, our interpretation of man’s early days will never be a precise match to that of our neighbor. Many origin stories regarding that ancient spark of life cross cultures that span the globe, each holding vaguely similar elements and lessons with the introduction of new heroes, heroines, beasts, and locations.

Isabel Greenberg has taken this philosophy into account in her graphic novel The Encyclopedia of Early Earth. Though not a non-fictional encyclopedia, Greenberg has reinterpreted familiar childhood stories of valiant journeys, jealous siblings, and—of course—the gravitational pull we call love. Her tales, which are framed as the life story of a nameless Nord man, are set in a much earlier and much colder time. Following the Nord man as he journeys beyond the horizon, we learn that a soul can indeed be split into three separate human bodies and returned again into one, that elderly women will go to murderous lengths just to ensure their right to an afternoon nap, and that our world may have once rested in the twisted tendrils of an avian demigod. 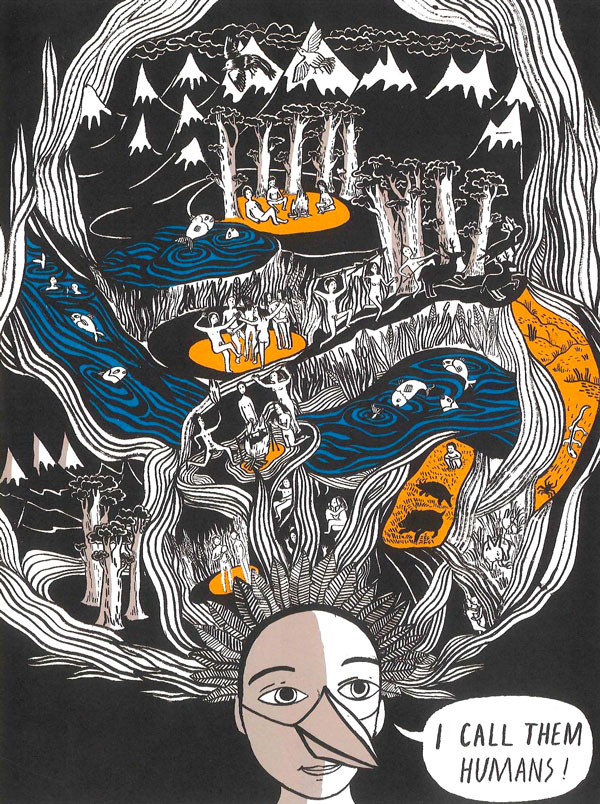 Early Earth is divided into four segments, each based in a new land and progressively traveling from the Land of the Nord to the South Pole. The stories follow the epic transecting journey of the Nord man as he searches for the missing piece of his soul; traveling with the company of a canine companion, he paddles from his northern-lying home to the arboreal settings of Britanitarka and Migdal Bavel. The Nord man encounters a cast of characters that is both familiar and strange: lurching giants, fickle rulers, and a mischievous band of moneys (alas, sans wings) each impact the Nord man’s soul search and are woven into his story’s tapestry.

Overseeing the earthly actions are three gods: the Eagle god Birdman and his children, The Ravens Kidd and Kiddo. The home dwelling, the Cloud Castle, is described by Greenberg as lying “beyond the Aurora in the forth (or maybe fifth) dimension” and contains the littered debris of innumerable intricate bathtubs, toilets, and chamber pots. While Birdman is less than thrilled by the epic journey of our mortal protagonist, Kiddo harbors a somewhat maternal protection for him and ensures that her cynical father causes the Nord man no harm.

The text’s narration takes a formal tone, while the internal and external character dialogue is conversational and often satirical, with many tongue-in-cheek interactions. 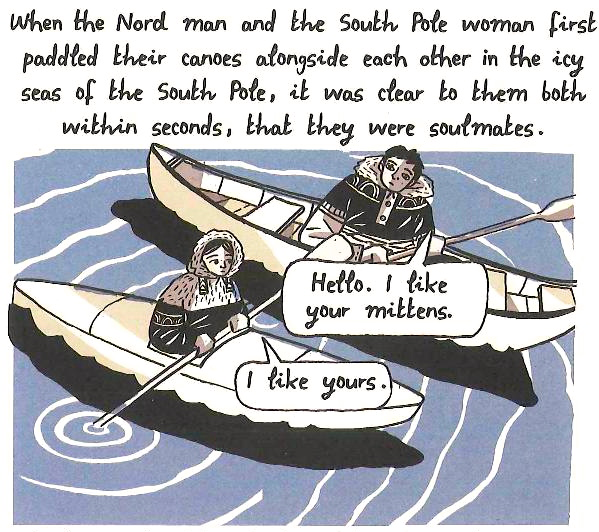 Transcending the written text is language communicated through the presence of color; the majority of this text is completed in matte black and white, though each page features complementary colors based upon the setting of its events. The panels are colored as though the reader is looking at a photograph that appears to be monochromatic, though it   is actually pigmented: shady greys are heavily present in the zones where mercury hibernates well beneath the 32° F mark. As the tales accumulate, warmer shades of apricot, buttercup, and crimson are brushed throughout the scenery of more temperate climates.

Stylistically, human bodies are depicted as they exist in reality: flawed and slightly disproportionate, each holds small morsels of beauty and defies the highly feminized and masculinized characters within traditional fairy tales. The South Pole woman, for example, is adored by the Nord man immediately upon Early Earth’s opening panels not because of her overall beauty but because of one small feature: her ears. Other characters—with missing teeth, bald heads, and wrinkles as deep as mountain gorges—remind the reader of the frailty that lies within our own mortal existence. 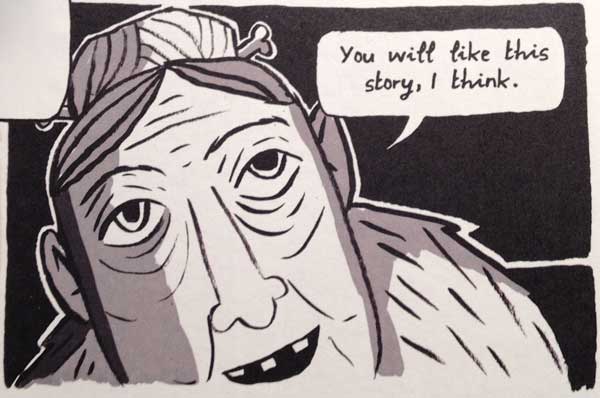 Greenberg pays respect to oral storytelling through Early Earth, which reads as though it were a verbalized collection of tales rather than one communicated through paper and ink. While each installment builds upon the last, individually they stand thoroughly sound and have morals presented upon their conclusion.

As with many folk stories and fairy tales, Early Earth faces an unfortunately quick ending with little wiggle room for questions from the reader. While somewhat abrupt, answers to any earlier questions realized by readers will most likely be found in the book’s Appendices. Here, Greenberg pays respect to the technical step of omniscient explanation in the dance of storytelling and takes care to explain more about the mystical lands we have traveled to, the people who inhabit them, and even additional stories.

Whether read in installments over the course of dark winter nights or in its entirety during a late winter snow squall, Greenberg’s The Encyclopedia of Early Earth contains a multitude of cultural references that will undoubtedly strike as familiar with any reader. This comedic and captivating collection offers a creative account of what life on our Blue Planet may have been like for the earliest of humans, introducing us to a bevy of original stories while respectfully reaffirming the well-worn tales of old. 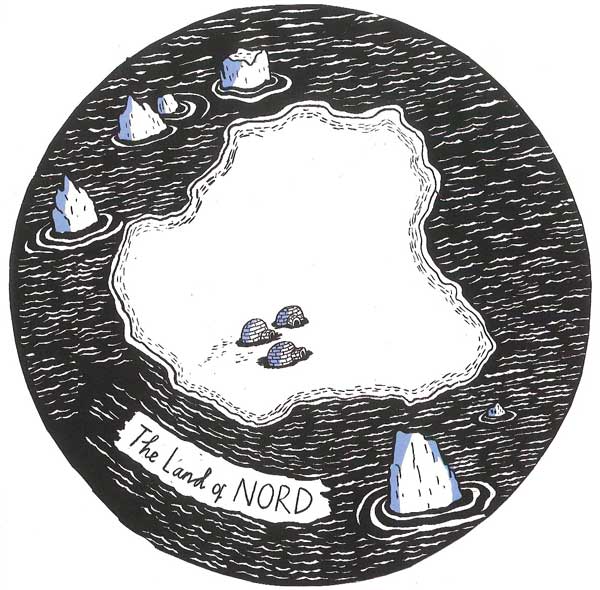