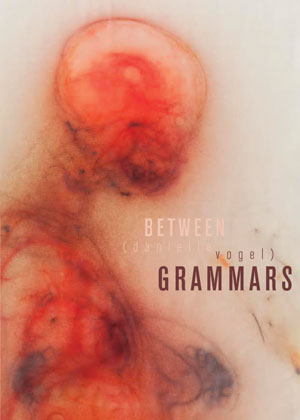 It’s so often that a book of poetry can be thought of as a static object, a collection of disembodied words that are supposed to transcend the body and voice of their author on the page. And it’s so often that poets are bodiless, as poetry—no matter how much it is about bodies—must be divorced from its corporeal source and recipient; that a poet writes for an anonymous reader who in turn reads nobody behind their words. However, and perhaps ironically, poetry’s meaning comes at least in part from its resonance within these bodies, in its ability to stir in them a visceral reaction. Danielle Vogel knows this and addresses this with a forceful intimacy between poet, reader, and page that is both beautiful and challenging in a breaking-the-fourth-wall kind of way, in the vulnerability it necessitates that we are so often sheltered from.

Between Grammars, a book-length poem, begins with an equation of text and body—epigraphs that include “we melt into each other with phrases… We make an unsubstantial territory,” from Woolf, and “Language is a skin,” from Barthes, and then a prologue in five volumes: body, letter, page, book, body. It’s significant that we start with VOLUME: BODY and circle back to it, volume itself as the attempt to unfold the hidden dimensions of these relationships, and the cyclical trajectory as the making and renewal of meaning in the body. The next section begins WATERSHED, and I can almost hear the tearing of the thin membrane between body and text as seamless contiguity floods the boundaries. 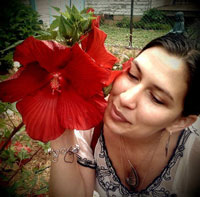 Vogel is aware of the porousness of her form, not only as she sets up this continuous experience, but in her skillful use of space. Justified blocks of prose float within an ample border of blank page, disparate spaces slipping in between the words. Words are folded within wide sets of parentheses, or loosed as the set is broken by the line, one parenthesis swinging open to the page. She is aware that poetic meaning so often lies beyond what is manifest—in the spatial, temporal, and aural excess that continually flood the boundaries of the body, letter, page, book.

I’m particularly intrigued by the relationship of this flooding to her parentheses, reminiscent of Alice Notley’s quotation marks in The Descent of Alette, in their ability to break and contain these words both visually and rhythmically, in the slowed pace and remapping of connections between words they require. However, their significance perhaps also lies in how Vogel’s use contrasts with typical grammatical use—of the parenthetical as essential rather than an extraneous aside.

The folding of words within parentheses plays with the folds that recur throughout this book: “( watch words ) ( a folded ) ( / edge and then ) ( unfold their ) ( / reaching ) ( directions ).” Interiority and exteriority are not binary opposites but one in the same, a labyrinthine topology of thought, inside space always in contact with outside space as infinite folds. This draws attention to the poet that’s folded into her poetry and the reader that is inevitably folded in as well, and the subtle resistance to this—“( reader you are ) ( a feeling of ) / ( shapelessness insisting ) (shape”—the tension, on the part of both writer, reader, and the form of the book itself, between desiring shapelessness and resisting erosion.

This tension is one introduced early, in the prologue—“Where the writer is submerged. She / surfaces to speak. Waits for her reader . . . Flooded by the book. She / floods the book in return”—and which accumulates layers of meaning throughout this book length poem. It’s a tension that returns to the flooding of language in poetry, the folding that confounds inside and outside, the destruction and remaking of the self:

What’s interesting here is the way these actions—waiting, flooding, eroding, not talking—transcend positive or negative connotation. Rather, what they suggest is that the locus of agency in writing and reading lies in what is not yet manifest—that the space where body, letter, page, and book intersect is the space of potential. What the “i,” meaningfully lower-case, can’t understand is what cannot be transmitted or contained in language, meaning beyond a lacking language. The mouth floods this language—it is the body that comes in to flood the boundaries of language with what lies beyond it. And in turn, language erodes the body, which doesn’t disappear but is instead spilled into the page, overfilling it.

The poet addresses the reader directly as “you,” and again we have the assertion that something is not being said, that this is what it’s like to not talk—that this silence is not a lack of communication but rather that part of meaning which lies, necessarily, in what exceeds language. This is where the intimacy between the “i” and “you,” the poet and reader, can take place—in their mutual erosion into this lacking language, their dissolution into this space of potential: “writer and reader push their / opening bodies in the way of one / another’s sound. Colliding with the / voiced experience. A place occurs. / Alongside time a tunnel of throats.”

The anticipation, or necessity, of this mutual experience is made apparent in the book not only through the direct address, but in the continual references to waiting: “( i sent ) ( this i ) (wait ) ( in the ) ( / maybe ) ( your ) ( arrival )”; ( your voice dismembers ) ( my / mouth ) ( is a room that waits )”; “i ) ( / place my ) ( thumbs ) ( beneath ) ( the / sentence ) ( in hopes of ) ( sensing ) ( an / arrival ).” The poet is not anonymous, nor does she write to nobody but rather to the embodied you. There is an emphasis here on this shared experience, but also one which always lies beyond the present—the book as a space of potential whose meaning is never fully manifest, but rather always rests in its resonation in you, in its temporal excess that reaches into the body. The poem’s time frame is never the present, but always the future, the future reader. This mirrors the kind of cyclical relationship Vogel lays out in her prologue—of body, letter, page, book, and body again—inextricably tied together, the body as both anterior memory and unknowable future.

This book is a “dwelling,” a “floating / architecture”—not object, but action; not a static space, but an ungrounded one, continually rebuilt and renewed. It is the “impossible space between body and / voice and thing” which Vogel attempts to breach. Yet, “impossible” here carries the same doubleness—what cannot exist is also that powerful space of potential. However impossible the task of breaching this space is in itself, the continual attempt is an important one—to resist the transformation of all language into data, information, commodity, or conveniently mapped space; to recognize that it cannot be stripped of the body but is always embodied, alive, and shared.