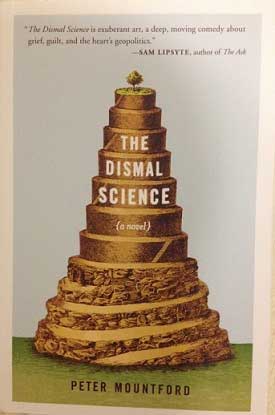 It seems fitting that Peter Mountford’s novel, The Dismal Science, is being published just as certain global emergent markets—Brazil, Turkey, India, South Africa, and Indonesia, nicknamed by investors the “Fragile Five”—are failing. As the book opens, in 2005, at a World Bank conference in Washington, DC, Vincenzo D’Orsi, a Milan-born, 24 year veteran Bank economist, is leading a panel discussion on the state of global markets. The subtext of his introductory talk, in the woozy gestalt of Bank and IMF bureaucrats:

Politics had matured, capitalism was working. Stability had taken hold and the emerging markets were now actually emerging.

Vincenzo is speaking of himself, too. Professionally, he’s peaked, after a long climb through the bank’s politicized bureaucracy; fundamentally allergic to simplistic, ideologically fraught rhetoric, he’s grown bored of spouting the corporate line. He knows he could give the same speech next year and the year after that, endlessly collecting a bloated paycheck and playing speed chess with his best friend Walter, a Washington Post reporter, on the weekends.

But like those emerging markets today, Vincenzo is about to send himself over the edge. At 54, he is placeless, neither Italian nor American, and only vaguely accustomed to Washington (despite having run World Bank programs in Latin America for years, he struggles with Spanish). His wife Cristina is dead, the victim of a terrible accident, and his relationship with their 23 year old daughter Leonora is strained. Vincenzo loves Leonora more than anyone in the world, but their lives are diverging, leaving him essentially alone.

Having dramatically quit the Bank, Vincenzo is free; anything is possible. But he stares out at the world with overpowering ambivalence toward everything but his daughter and his daughter’s rat-faced boyfriend. Soon after leaving the Bank, he finds himself in a New York hotel room during an early winter storm, forced to consider his future.

What he’d never done was stop advancing himself, steadily, gradually, upward within the architecture of the Bank. Now he was supposed to put that energy toward some other thing. The great second act. Or was he onto his third act, now? Alas, it was probably the third act. The finale.

He needed a new fire, a fresh purpose to his days. Instead, he had a hissing heater by the window of his well-appointed hotel room. And he had those massive snowflakes, too, a hundred million delicate and crystalline lattices suspended peacefully between gusts, like a sea of glowing spirits floating aimlessly between waves—but then they’d all spin wildly away from the window as if gathering for a tsunami.

Vincenzo follows in a long line of melancholic and disillusioned middle aged male characters in existential crisis. In certain ways, there’s not much new here: “What he wanted was sad and predictable: a younger woman, not too much younger, but enough to be truly beautiful, with whom he could he could settle at his farm in Piedmont and pass his remaining years in peace, tending to the olive trees.”

But Mountford’s portrayal of Vincenzo is utterly vivid, overcoming, as good writers do, trope with particularity. Vincenzo breathes so completely, most fully when he’s grappling with his beloved Leonora (the father-daughter dynamic here is exquisite), that the reader is liable to imagine the testy, forlorn man is sitting on his lap. Pat him on his bald head, he needs comforting.

One can’t help but be reminded of the Italian actor Toni Servillo in this past fall’s La Grande Belleza. Servillo plays a onetime novelist and longtime playboy, who at 60 can no longer quite connect. Like Vincenzo, Sevillo’s Jep Gambardella lives in relative opulence, but to no effect. Even his oldest friends leave him cold. But Jep has something Vincenzo doesn’t: a city—his city, the eternal city—Rome. Jep turns to Rome as perhaps we all seek out a measure of the eternal to soften the inevitable decline. Vincenzo, on the other hand, seems to have nothing. He pretends to fall in love with a different city of high elevation, La Paz, but that’s really in an effort to get laid.

As he struggles with his own desire and indeed his daughter’s future, Vincenzo comes to resemble perhaps the most remarkable of literature’s melancholic men, Lampedusa’s Don Fabrizio, the Leopard. (It may be that Italian men have a lock on this role.) Both men struggle, it seems, with a world that goes on without them. Their reaction is rarely graceful, and often self-destructive; even the Leopard, the wisest of men, is the often the cause of his own suffering.

Yes, Don Fabrizio had certainly had his worries those last two months; they had come from all directions, like ants making for a dead lizard. Some had crawled from crevices of the political situation; some had been flung on him by other people’s passions; and some (these had the sharpest bite) had sprung up within himself, from his irrational reactions…

One might easily substitute Vincenzo here for Don Fabrizio. Vincenzo, who reacts viscerally to fundamentalism, breathes in disorder. His antidote, perhaps counterintuitively, has long been the hyperrationalism of economics. Now, after throwing away his job, his every move feels irrational. In the spiraling out, he confounds all those in his path, including himself. But is he, finally, living? If auto-pilot’s been turned off, and the driver has taken his hand off the steering wheel, where exactly is he going?

Vincenzo, deep in confusion, has no idea. Mountford is too honest to say otherwise. We each of us are only wherever it is that we are; one can’t be ambitious and utterly sanguine all at once—and anyway, only time can sort it out, if in fact that is what time does. “There would not be angels spreading their majestic wings at the conclusion,” he writes. “There had been only this—the space left between where he’d been and where he would emerge again.”