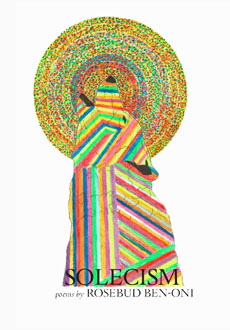 It is not difficult to lose patience with the poems of Rosebud Ben-Oni’s Solecism: studded with cultural and personal reference, streets names, and regionalisms – not to mention the grammatical experimentation implicit in a book of poetry – Ben-Oni’s work disorients. The reader clings to disparate stanzas, following ambiguously symbolic sparrows, in a fruitless attempt to add everything up, but the author evades a single style. Ben-Oni traverses her mixed Jewish-Hispanic heritage in sudden turns; just as the reader grows accustomed to colonias and sal si puedes they find themselves in Israel (with side trips back to the States), the parts of the poet divided into cavalier sections. A fragmented poem about Ramadan lives alongside unexpectedly sentimental lines like “and so they fly away / breaking my heart on this cold, cold day” or a sugary ode to the poet’s niece. And Ben-Oni’s eerily suspended language occasionally lapses into indulgent alliteration and even rhyme, troubling an easy conceptual reading and testing the reader’s fortitude: attempting to process more than three such poems in a row generally leads to a sort of inattentive auto-pilot.

Were it not for Ben-Oni’s introductory definition of her title term, one might leave the book at that; the poet hints, however, at the validity of this contradictory whole by characterizing “solecism” as follows:

1. nonstandard or ungrammatical usage
2. breach of good manners or etiquette
3. any error, impropriety or inconsistency

Ben-Oni, in other words, is doing all of this on purpose. She is breaching the good manners of narrative sense and propagating intentionally inconsistent poetry. Her solecistic spirit is one of interruption and disruption, illustrated, ironically, in one of her more comprehensible poems, “The Current Political Situation of the Roma.” The poem is an active dialogue between poet and nitpicky history professor, whose frenzied remarks (“Faith wouldn’t take away the ‘F’ you’re getting,” and “I cannot reward creativity”) climax tellingly with the line “Moreover, why did you assume you could write a poem?”. Though one could argue that Ben-Oni’s intense reliance on personal interpretation, via geographically/culturally specific collage, is more isolating to the reader than is typical or artistically constructive, here, at least, the poet addresses the idea that she is not all-knowing; whether she convinces her audience entirely of her sincerity is yet to be seen.

Nevertheless, Ben-Oni fails to estrange us completely, and on a line-by-line basis, can woo us back with strange resonance. There is something irresistible about the melody of “At ten, I held the look of locust and mothers of tarp and tin / held closer their unborn in the streets of childpits”, or the unsettling understanding of “In the light it is your face the young mourn”. Indeed, when Ben-Oni manages to create a sense of scene, particularly when tackling tragedy that transcends inscrutable personal reflection or attacks on hipster neighbors (“Dabar”), the work is quite compelling. Insight into the poet’s intent, beyond the knee-jerk withdrawal of the confused reader, can be gleaned from the poem “For the Mixed Child with Pale Skin”:

Whitewash over the boredom of limited choices,
the Other that no one will claim, your parents don’t look
the part in anything.

Ben-Oni’s is the poetry of this Other, desperate in displacement yet unable to content itself with a solitary (boring) approach. With this in mind, the book could very well come with a cautionary label: Do not exceed intended dose. For the poems, when given isolate attention, reveal truth on a second read, whether or not the reader can articulate that truth. Weighted with bombings, poverty, and no deficit of quasi-apocalyptic/darkly biblical imagery (“the once-bitten lamb / with the succubus grin” , “from his mother’s rosary // hangs a broken neck”, “Goat blood foams in the Hudson”), it’s possible that the reader’s auto-pilot mechanism is actually self-defense against the trauma of Ben-Oni’s subject matter. In the end, it is admirable that Ben-Oni, by no means a “popular poet,” attempts a poetry of that which “can’t be museumed” , that which must be returned to, taken in moderation for its vastness, slowing the reader, for better or worse.