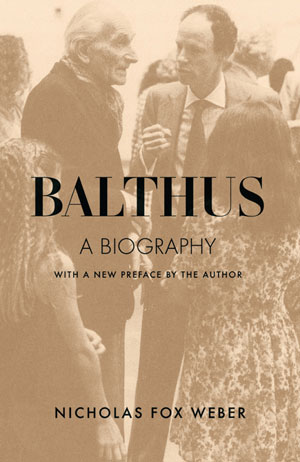 When looking at the paintings of Balthus, the viewer can’t help but react. Seeing paintings of young and often pre-pubescent girls and women in poses loaded with a strange sexuality, there is no possibility of cool remove. The viewer is made to consider actively their role in looking at the young women in these sometimes cruel, always compelling, provocative and often beautiful images. Balthus’s images have a strange, almost dreamlike hold, as they look back at us, impenetrable and confrontational. Balthus himself is somewhere in them yet distant. He wished his life to be separate from his work, something to be never included in exhibits or official publications, only “a misleading and harmful screen placed between the viewer and painter…paintings do not describe or reveal a painter.” He almost entirely obscured the true facts of his life, recreating himself as a count and rendering himself a challengingly elusive subject for biography. He placed the most responsibility on those looking at his work to react to whatever sexuality or darkness they might find in the work as their own perception.

The relationship of the work and the man and the simple question of what about Balthus continues to compel and scare us pervade Balthus: A Biography by Nicholas Fox Weber, recently re-released by Dalkey Archive. To dismiss Balthus’s work and our interest in it as being for its prurient content alone seems a disservice. Though at the beginning of his career he did, in his own telling, aim to shock, in later works such as “Girl at a Window” there is a great sense of beauty and a far different tone. Weber shows Balthus’s brother’s paintings and drawings of similar subject matter that come devoid of the elegance and interest of Balthus’s work. There is unquestionably something peculiarly un-nerving in Balthus’s traditional paintings, made often in the style of far older painters such as Piero della Francesca. Even the subject matter is not unprecedented.

Recently, walking through the Clark Museum, I found myself facing a delicately painted canvas by Renoir of a girl in stasis, sleeping with a cat upon her lap—precisely the subject upon which Balthus would fixate, almost unceasingly, for his career. A similar Balthus, “Thérèse Dreaming,” shows a girl, her head leaning back and her legs spread apart, as a cat drinks milk. In this canvas, there is none of the calm of the Renoir but a feeling of uncomfortable voyeurism, harshness amid the beauty. The most difficult moments in Weber’s book are the all-too-believeable descriptions of Balthus’s difficult and torturously controlling encounters with his models. As Weber correctly notes, in the art of Balthus, “the central act is dreaming and desiring.” 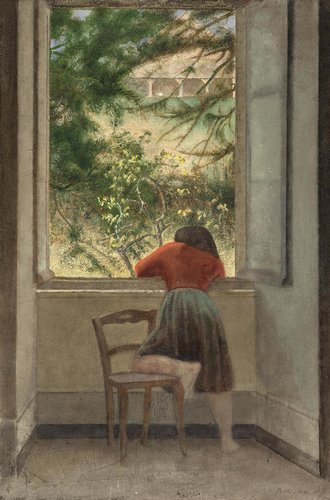 Balthus was an artist of surfaces. Francis Bacon is quoted in the book with perhaps the most perceptive appraisal of Balthus’s work, noting his work in redecorating the Villa Medici in Rome and re-doing the walls. Balthus was a designer of stage sets as well as an artist who painted canvases. His work was often about traditional exteriors and appearance, at a time when so many artists were moving toward expressive technique. His almost unceasingly consistent subject matter might have also offered him a way to have great focus on painting while allowing variation through the repeated subjects of these young girls that he found “amusing.” This distance is part of what makes the work of Balthus so distressing and powerful for the viewer.

Balthus himself proves similar to his paintings, both accessible and elusive, a constant contradiction. He allows Weber to conduct interviews while obscuring his biography and creating new and fantastic narratives of his own. Through years of interaction Weber manages to find the true life of Count Balthus Klossowski de Rola that ends up being, as most lives are, all too mundane and expected. He finds himself surprisingly connected to the man as he tries to approach his work and life critically. This forces some repetition of similar arguments, for just as Balthus’s work was repetitive so this book must be, but allows for some quite revealing moments and interesting analysis of the work, showing all the more clearly Balthus’s prodigious skill as a painter. Fittingly the book becomes not a simple biography of the artist but also a story of Weber’s tumultuous relationship with the artist, much like the relationship we have with the work, moving quickly from love to distaste for this work that, Weber writes of one painting, “had left me no room for escape.” While Balthus’s life, much like his work, may not always be easy to take, it is also often fascinating.

Gabriel Chazan, a filmmaker and writer, is from Toronto, Canada. He is a student at Sarah Lawrence College studying film history, art history and poetry and will be studying at Oxford University this coming year. He writes on film at Home Movies: The Sarah Lawrence Film Journal.