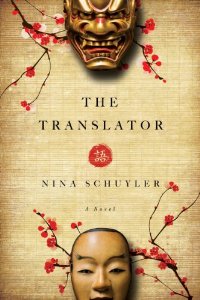 I noticed, earlier this week, that my friend Cristina Vezzaro had been posting on Facebook in Dutch. This shouldn’t have surprised me. Still, I wondered, “Have you added a new language?”

“I took Nederlands while in Geneva 20 years ago. I am just trying to refresh what I knew and learn it better,” she replied.

Vezzaro, after all, is a literary translator, who translates novels from the original German and French to Italian; but Cristina was born multi-lingual, in a part of Italy near Germany and Switzerland, and she acquires languages as some do shoes or kitchen appliances. I’ve witnessed her almost immediate acquisition of American English, slang and all.

Hanne Schubert, the protagonist of Nina Schuyler’s quietly perceptive new novel The Translator, is one such character, an expert translator of several languages with a special expertise in Japanese. Like Vezzaro, she is primordially multi-lingual. Schubert, whose childhood and education took her all over the world and who eventually settled with Japanese husband, an ambitious chemist, in San Francisco, is at home almost everywhere—and yet nowhere.

Now a widow, the intensely (and rather moralistically) disciplined Schubert is working on the most important translation commission of her career, a novel by the top Japanese author Kobayashi. With the translation, Kobayashi will grab hold of the American market and Schubert herself will become a star. She might even become a successful writer in her own right.

Writers, quite unfortunately, are condemned to think this way about every next thing they do. Translators, who live in the shadows, have it even worse: as much as they might desire a connection to readers, their work is imagined to be invisible. In the publishing industry, this means poor pay and rarely seeing their name in publicity or on the book cover. Having grown tired of this, this year Vezzaro, who is based in Torino, started a new website Authors and Translators, meant to draw attention to the interdependency of writers and translators and the critical role translators play in the literary enterprise. (I wrote about it recently here.)

Translators, indeed, are caught between conflicting urges for mastery and subjugation, and this tension underlies Schubert’s journey in The Translator. Using her own deep knowledge of Japanese and asserting her own judgment about the author Kobayashi’s main character Jiro, a classical musician who sends his dying, mentally unstable wife away, Schubert closes in on finishing the translation. She is convinced she understands Jiro intimately, even better than Kobayashi.

But then she stumbles. He weeps uncontrollably.

Hanne looks up as if a stranger has just entered the room. Even in the darkest moments of caring for his wife, as her condition deteriorated, Jiro displayed the fine qualities of composure and restraint. It’s out of character and it isn’t at all believable. After a long string of dismal months, he finally and most deservedly had an extraordinary day. Why cry now?

He weeps uncontrollably, feeling a serenity he didn’t know he was missing.

This conceit is her crime. It makes the book a kind of cautionary tale for translators who feel themselves creative agents. They are, of course, and Schuyler provides worthy insight into the process. “Translation is an art, she’s said countless times, requiring all the skill of a writer and then some, because the story, written in one language, one as different as Japanese, must be made meaningful in another language.”

Translation is indeed an almost irresistible literary metaphor. Schuyler plunders it effectively, and most of the time subtly enough to underlie, and not overwhelm, her story, which centers on Schubert’s search for a connection to her long-distant daughter Brigitte—a mother’s desire to apologize to a daughter she couldn’t ever understand.

After a beautifully described accident that leaves Schubert able only to speak in Japanese, she comes to realize her problem with translating Kobayashi, who angrily rejects her manuscript, is the same with connecting with Brigitte: her own biases are getting in the way. Schubert, a woman of 53, must forget what she thinks she knows and listen more intently, trusting others to speak authentically for themselves.

Nathaniel Popkin is a journalist, author, editor, film writer, historian, professor, and critic. Since 2002, with the publication of his first book, Song of the City: An Intimate History of the American Urban Landscape (Four Walls Eight Windows-Basic Books), he has been a distinctive urbanist voice in the conversation about Philadelphia’s past, present, and future and a careful observer of cities in the context of American life. According to Tom Sugrue, historian of the University of Pennsylvania, Popkin is “a visionary with two feet on the ground, a poet who finds verse in the everyday.” Lion and Leopard, Popkin’s novel of historical fiction about the romantic movement that shook the foundations of the American art establishment in the early 19th century, will be published by the Head and the Hand Press in Fall 2013.