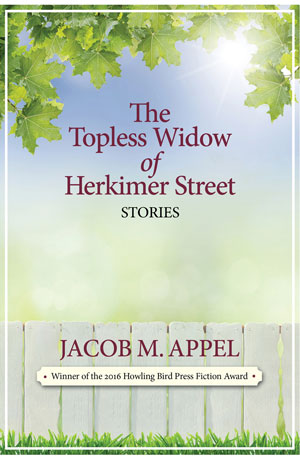 The Topless Widow of Herkimer Street, winner of the 2016 Howling Bird Press fiction prize, is an honest, funny, and sometimes un-apologetically dark collection of short stories. Its author, Jacob M. Appel (Miracles and Conundrums of the Secondary Planets (2015), The Man Who Wouldn’t Stand Up (2012)) can easily be described as a modern renaissance man: in addition to his writing, he is also a bioethicist, attorney, and a physician. These professional fields come into play in many of the stories included in this collection, often to highlight or expose ethical conflicts his characters must face.

By placing classic academic dilemmas from the abstract or hypothetical realm into personal narratives, Appel provides a valuable, fresh perspective on both the dilemmas themselves, and the lives of married, middle-class adults with professional careers (there’s often an undercurrent of gentle satire here, aimed at “older generation yuppie” culture). Though the quality of the writing and the characters are consistent throughout this collection, the title story, “The Topless Widow of Herkimer Street,” “Bioethics for Dunces,” and “The Current Occupant” elevate above the rest with a surprising sense of longing and sadness.

In “The Topless Widow” a group of seniors led by the mother of the protagonist sunbathe together in her yard, an activity that alarms local law enforcement, nearby residents, and Quincy Marder, her son who works as a lawyer. “She looked decades older, sexless, nearly lifeless—her body the sort of breathing shell that you might pass on a public street without even taking notice,” he observes. Though Quincy tries in any way possible to end the behavior of his mother and her guests, he is unsuccessful in controlling the situation and it continues to escalate until she is arrested for public indecency. The story concludes with Quincy’s recognition of his mother’s perhaps futile need for youthful vitality and agency.

A man and woman have strongly conflicting ideas over whether or not to take their daughter off life support in “Bioethics for Dunces.” The husband, Leonard, a professor of bioethics, seeks out the advice of a physician and abortion specialist, Tony Ambrosino, who gives Leonard illegal morphine syringes so he can carry out the deed of putting his daughter to sleep. In a strangely touching scene, Leonard compares the act of euthanizing his daughter to a time he had released the fireflies she had collected in a jar and given him: he “let every last one of them go but he loved them.” A component of his desire to terminate her life comes from the belief that it will free her. Yet he is deeply conflicted. When Corinne, his wife, becomes relieved after the daughter’s death, Leonard suffers the full impact of the loss: “She reached for Leonard’s body, and he let her take it, let her hold onto it, but all he could think about was his daughter. About how she’d been alive that morning and wasn’t anymore.” 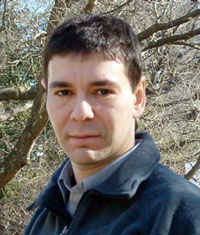 Characters in Appel’s stories often find that their perspectives and plans shift fundamentally when situations become much more complex than they had imagined. They must make critical decisions but no choice ultimately feels right. Lewinter, the protagonist of “The Current Occupant,” is caught between an old college girlfriend who has inhabited the house he recently bought online and refuses to leave, and his wife, whose decision to stop taking anti-depressants has severely affected her temperament. By resisting his ex-girlfriend, Lewinter resigns himself to enduring his wife’s mood swings and vicious temper. He rationalizes his continued wistfulness surrounding his ex-girlfriend, his daydreams where he imagines a life with her instead, by reassuring himself he will quickly forget those feelings: “Once they reached the baby shower, Lewinter told himself, he’d have a vodka gimlet, or possibly two, and dance with each of his daughters, and soon this impulse, like so many others, would pass quietly into the night.”

Appel offers simple, elegant depictions of adult life that feel both mundane and extraordinary at the same time, making it easy to initially connect with the characters’ lives, and then remain engrossed by them throughout. Though his protagonists rarely find the resolutions they are looking for, they are often held accountable for their weaknesses so that the stories themselves reach satisfying conclusion. Appel’s characters are humanized by what they yearn for, what remains just out of reach. 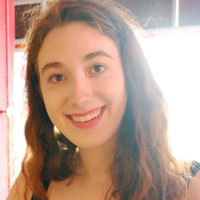 Odette Moolten, a native Philadelphian, is a rising sophomore and Benjamin Franklin Scholar at the University of Pennsylvania studying English and creative writing. She also interns at Moonstone Arts Center which sponsors over a hundred events in the area annually including poetry readings, history programs and other artist & author presentations. She loves to write short stories and poetry.