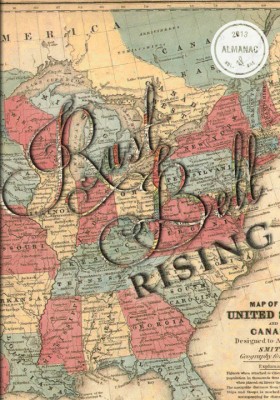 Rust Belt Rising Almanac presents a pastiche of short stories, poems, photographs and artwork. Collectively they form a fairly complete image of the post-industrial cities that comprise the toponymous “belt” (in the case of this publication, namely Philadelphia, Cleveland, Detroit, and Pittsburgh). Collectively being the operative word. For individually, some of the stories are flashes in the (rusting) pan. However, together these ethereal dispatches evoke the negative space inside an abandoned factory building, and upon reaching page 168, readers can step back and see it for what it is.

So what is it? The triumph of Rust Belt is its ability to dispel the false narrative about America’s trajectory from industrial to post-industrial, in which the peak of our society was the peak of the industrial era, and it’s been downhill ever since. Put another way, the idea that when factories were pumping in the hearts of these cities, it was the “good old days,” and now that they’ve shut down or relocated, despair ensues. Rust Belt demonstrates that a) the “good old days” weren’t always all that good, as Kim Geralds illustrates in the opening poem “Trademarks”:

And Sarah Grey elaborates upon in “Under This Cloud: Life and death in the shadow of a coal-fired power plant”: “your sign of home and life and prosperity is also a sign of death… the people you love, and indeed you yourself, have always been dependent on an industry that sees the lives of you and everyone who raised you as collateral damage.”

And b) things aren’t always so bad right now, depending on who you are. Many of the authors invoke the thrills of being a young person in these Rusties: riding bikes through abandoned streets at night, renting cheap art studios in former factories, gardening in urban soils, roadtripping. Fear not, other authors look beyond the rehabbed warehouses, to the open-air drug markets and prostitute drags just out of sight, and the people whose lives are trapped in them. In Liz Moore’s interviews with prostitutes working along Philadelphia’s Kensington Avenue, a woman named Tanya describes her failed attempt to enter normative pathways of society: “I was clean for five months. Those five months, when I was clean, I couldn’t get a job at all. I went so many places, so many places, like K-Mart, Pathmark. Anything you can think of, I went to…None of them are hiring.”

At first, I was dubious of the “almanac” epithet. An almanac is traditionally a collection of statistics and information upon which hobbyists or farmers base their decisions. But ultimately, I would say Rust Belt is an almanac: an arsenal of documentation about “what is,” that feeds the imaginative of “what could be” for America’s post-industrial cities.

Make no mistake, Rust Belt doesn’t seem to imply that the ideal version of “what could be” is accomplished by more small businesses and artists’ studios. Those edifices are the horizon the book constructs that we must look beyond.

Looking beyond is essential in an era of urban revitalization where the dominant paradigm is Richard Florida’s regrettable “creative class” approach—a theory that Florida himself admits provides little trickle-down benefit for cities’ lower-income inhabitants. I’m someone who hopes that these rusted old cities can someday thrive in ways other than merely serving as a concentration of “creative” capital.

In Marissa Johnson-Valenzuela’s piece “Trumbullplex,” the protagonist contemplates “how a city might be after people stopped using it the way it was built to be used.” I can only hope cities will someday be used to foster residents’ pursuit of a vocation as Alexander Barton defines it in “Cleveland is a Vocation”:“[the word’s] roots are the Latin words for ‘a call’ or ‘a summons.’ The underlying belief is that everyone, through their upbringing, passions, experiences, and education, is searching for an honest expression of how they see the world.” Everyone, including Tanya on Kensington Ave.

Ariel Diliberto is Block Programs Coordinator at New Kensington Community Development Corporation. She is also a contributor to Hidden City Philadelphia and sits on the central committee of the Philly Socialists. Ariel received a B.A. in Urban Ecology from Vassar College in 2011.  For more information, visit her website.