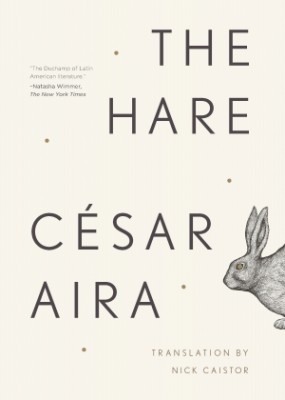 The writer César Aira has a charming trait (at least in the English language translations of his books published by New Directions): at the end of his novels, he inscribes the date he completed the work, at least so we are supposed to believe. For both The Miracle Cures of Dr. Aira, published in Katherine Silver’s English translation by New Directions last year, and The Hare, which New Directions brings out tomorrow translated by Nick Caistor, were apparently finished the same day, September 6, 1996.

Could this really be? Aira, the author of some 70 works of fiction and essay, is after all one of the most prolific writers in the world. It is conceivable he completed the two books on the same day. Or has Aira, a master of meta-fiction, found yet another way to invite the reader to contemplate the nature of reality, the possibility of storytelling, and the absurdities of perception? “Between one story and another,” he writes in The Hare, “even one that was really told and another that remained virtual, hidden and unborn in an indolent fantasy, there was not a gap but a continuum.”

That continuum undergirds all possibility, all human experience, Aira wants to say, even in situations of profound disjuncture. In The Hare, an English naturalist finds himself in a landscape he can’t quite fathom, among native people he finds inscrutable, amidst an Indian war he can’t interpret that appears based on entirely unbelievable myths and interpretations of reality. Yet the naturalist, Clarke, a somnolent and melancholic protagonist much like Aira’s other middle aged male protagonists (a continuum of strangely naïve men), seems to believe everything: truth, after all, is as flat as the pampas.

Clarke is ostensibly out to discover a legendary flying hare that can jump in one motion between two horizons. Wonderfully, all the metaphor doesn’t get in the way of Aira’s clipped plot, which though full of funny asides about the writing process, draws the equally naïve reader in and pulls him along. Clarke bandies about among different Indian kingdoms and meanwhile the truth seems closer—or further away—every moment of the journey.

That the ultimate truth of Clarke and his co-adventurers is laughably absurd is part of the fun here. But is it enough to make this book endure in the imagination? The folks at New Directions think so—they say The Hare is the best of the eight Aira novels they’ve published. But I’m not sure this is so. I’ve read five of the eight; among them, An Episode in the Life of a Landscape Painter in Chris Andrews’ translation, about another European seeking out a transcendent truth in the pure wilderness of Argentina, stands out above all the others, for it rises beyond melancholy, beyond the intellect, beyond even imagination to a most unforgettable sublime. The painter is Johann Mortiz Rugendas, a 19th century master of landscape and genre advised by Alexander von Humboldt. Rugendas is out on horseback with an acolyte (a storyline also mirrored in The Hare), when he is struck by lightning. “It was pure action,” writes Aira, “a wild concatenation of events.”

There is something in those events and those that follow, which Aira describes with painterly care and also wisdom—“Rugendas witnessed the spectacle of his body shining”—that puts the reader directly, with stunning immediacy, inside the character’s life being torn and twisted. This is what, in The Hare, Aira calls art, “that which does not demand understanding.”

The author signed An Episode November 24, 1995. If that is so, and The Hare was finished nine and half months later, we can see it as a worthy analog, a book of meanings to go along with a work of art the reader will never forget.

Cleaver fiction review editor Nathaniel Popkin’s latest book is the novel Lion and Leopard (The Head and The Hand Press, for sale November 12). He is also the author of Song of the City (Four Walls Eight Windows/Basic Books) and The Possible City (Camino Books). He is co-editor of the Hidden City Daily and senior writer and script editor of the Emmy-winning documentary series “Philadelphia: The Great Experiment.” He writes the “Bookmarked” column for Art Attack/Philly.com.