In his foreword to its first collected volume, Chris Ware compares Barnaby, Crockett Johnson’s 1940s newspaper strip, to other early influential comics like Little Nemo, Krazy Kat and Peanuts. He goes on to say that Barnaby is “the last great comic strip,” a description that ends up being a little unfair to any first time readers of Barnaby: though there are moments of greatness in it, Volume One mostly points forward to the strip’s potential, rather than showcasing Johnson’s brilliance firsthand. This difficult start is consistent with the beginnings of other strips, even great ones: the ability to deliver a solid joke, every day, in three or four panels is mastered by very few and even fewer, if any, can do it consistently from the first strip. Barnaby, however, has one of the best rocky starts I’ve encountered in the medium, and its later greatness is well worth its early fumbles.

Crockett Johnson may not have the immediate name recognition of Charles Schulz or Bill Watterson, but his work is a mainstay of American childhoods: he authored Harold and the Purple Crayon and its sequels, and readers of the Harold books will recognize in Barnaby’s protagonist, five year old Barnaby Baxter, the prototype of Harold. Additionally, there are several Barnaby strips featuring a half moon seen out the window over Barnaby’s bed, the final, iconic image of the first Harold book. Harold readers will also recognize the art style: stark, bold lines over simple backgrounds that nonetheless show an impressive command of perspective and space. 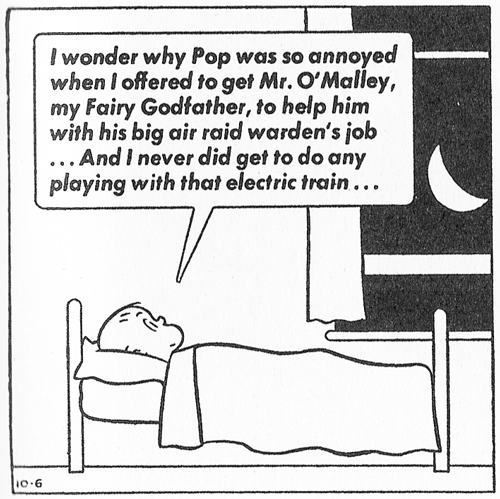 Barnaby lives in a small town during World War II, and the strip often focuses on the war and its effects on American life: Barnaby’s father is an air raid warden, and an early story arc focuses on an attempt by criminals to hoard and resell coffee. Another story shows Barnaby attempting to grow a victory garden under the dueling tutelage of his father and his fairy godfather, who encourages Barnaby to “be practical” and grow mangoes. Though Barnaby is nominally the strip’s protagonist, the strip is stolen by his fairy godfather, J.J. O’Malley, a pink-winged huckster who claims his cigars are actually “fine Havana magic wands” that need to be perpetually borrowed from Barnaby’s father’s humidor. Mr. O’Malley, as Barnaby invariably calls him, is a self-aggrandizing confidence man, whose various schemes and scrapes fuel the best narrative arcs: “O’Malley joins the circus and sets a lion free;” “O’Malley writes his memoirs by stealing from other sources;” “O’Malley gets elected to Congress and chairs a committee investigating Santa Claus.” O’Malley is a walking shaggy dog story (something the strip winkingly acknowledges in its literal shaggy dog, the talking Gorgon, who turns out to have nothing to say), and, as the strip progresses, the laughs are increasingly mined not from O’Malley’s ridiculousness but the ridiculousness of how the world reacts to him. The last sustained storyline in this volume, O’Malley’s successful congressional run, is bleeding-sharp satire whose stabs at the American election process still sting.

The strip’s other narrative engine, however, exposes the problems, not of Barnaby, but of publishing its complete run two years’ worth of strips at a time: there are just too many recycled story lines and gags sparked by the disbelief of Barnaby’s parents in his fairy godfather. Johnson takes some of his best shots at middle class conformity when the Baxters take Barnaby to a psychologist specializing in the “problem of the imaginative child,” but subsequent attempts to disprove O’Malley’s existence become tiresome and repetitive, and it’s hard not to want to sweep Barnaby’s parents and their doubt off the page and get back to O’Malley’s latest self-centered (and self-deceiving) scheme.

This repetition, both in story lines and jokes, is, again, largely a problem of format rather than an issue with the work itself: when read daily over two years, O’Malley’s signature exclamation, “Cushlamochree!,” becomes an endearing punchline even if reused several times; when reading a year’s worth of comics in a few hours, the repetition begins to grate, and, no matter the impetus for the story or joke, the early pages of the book can be downright awkward in their execution: the jokes often fall flat and many narrative arcs go on for far too long or have payoffs that left me rolling my eyes. It’s not until nearly the end of this volume that the strip delivers its first great visual punchline, and though the comic brilliance of that one, wordless panel is well worth the wait, it’s hard to sit through over two hundred pages of scattered laughs, sustained only on Chris Ware’s assurance that the material is great.

I would like to say that a two or three volume condensed version would present the strip in a better light than the commitment to publish every frame of the entire run, but as I flipped through the index looking for material to cut, I began to sympathize with the editors: excise the arc about the scrap metal drive and the introduction to McSnoyd the invisible leprechaun, O’Malley’s perpetual rival, is lost; remove the overly long investigation into a haunted house and the timid freeloader Gus the Ghost is gone. Like most pieces of serialized comedy, Barnaby has to learn to walk before it can run, and its early stumbles can be unpleasant to watch. However, once the series hits its comedic stride, about half way through its second year, Barnaby doesn’t just walk or run: it flies on O’Malley’s pink and self-important wings.