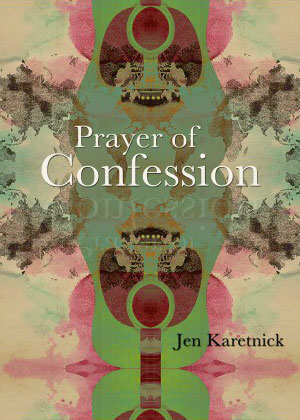 Jen Karetnick’s Prayer of Confession pulls the reader into an intimate, enclosed space—often either a private, domestic space or a suspended moment—that is alternately comforting and suffocating, at times a place of productivity and rebirth and at times a stifling, labyrinthine funhouse that consumes and destroys. In these spaces, identity is either recovered or lost—fragments of the self add up to a whole that is seemingly cohesive and meaningful, or become increasingly disjointed. Karetnick’s images of these spaces—homes, motels, coffins, temples, and the body—as well as the barriers to the exterior world—veils, glass, windows, apertures—recur throughout her poetry. An additional recurring element that serves to further complicate the issue of identity is the reflected image of the subject—caught in a window, mirror, photograph, or the eye of another—that is simultaneously intriguing and repulsive, humanizing and objectifying, unifying and shattering as the image is collected, distorted, or doubled in these prismatic interior spaces. What Karentick captures in her poetry is the anxiety and uncertainty produced by the uncanny, by the subtle gap that emerges between the familiar and unfamiliar. 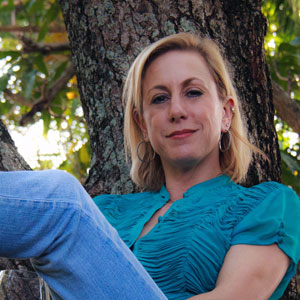 One such uncanny space is that of the womb—the literal womb, or analogous womb. In “In Suspension,” the speaker describes her son, lying in a hammock in his room, his “portable womb.” He is suspended not only in space, but in time, as the “day continue[s] without him.” Though this is an image of comfort and containment—her son held in the hammock, in this one moment in time, insulated from the external world—she makes clear that this is only temporary, that what follows this suspended moment of safety and protection is the inevitable collision with the movement of space and time around it, as her son is “cosseted, in wait, before the beam cracks.” The son’s room becomes stratified—the beam of the room will crack, the hammock will fall from the beam, the boy will fall from the hammock—all layers of safety, protection, and insulation will be destroyed in time, and will leave the boy unconfined, yet unprotected and vulnerable.

Similarly, in “Antepartum,” Karetnick describes the relationship of the “poet” to various enclosed spaces that insulate only temporarily—a motel, “mid-range hotels like Sheratons,” bathtubs, a car’s back seat, and, again, the womb. These spaces are not only temporary but have a dual nature—they can be protective and nurturing yet also suffocating and restrictive. Each stanza begins with the poet’s oscillation between the polarizing effects of these spaces (“The poet never or always,” i.e., the first stanza, “The poet never or always / waxes nostalgic about motels”) as the spaces become increasingly layered, buried inside each other like Russian nesting dolls: a “baby girl” “sip[s] like a butterfly / from her mother’s navel,” the mother is submerged in the bathtub, the bathtub is in the motel. Each temporary enclosure can be viewed as a protective, regenerative space, or as grimly constrictive—particularly the bathtubs, which are “big as barnyards / and sealed as diaphragms”, or sometimes “a coffin.” In the last stanza, the poet “never or always” abandons the bathtub—watery, womb-like, a source of cleansing, transformation, and perhaps a kind of rebirth—instead “chip[ping] away at herself / with a dull or rusty tool.” Avoiding the space altogether, she contemplates destroying her exterior in attempt to uncover her self.

Karetnick uses the image of the coffin again in “Epigraph,” here exploring another uncanny element—the dismembered body—and consequently the fragmented self, the failings of representation, and the irreconcilable dissonance between the mind and body, the self and the image of the self. The speaker guides fourth-graders to a depiction of Osiris, or rather his dismembered parts and sarcophagus, as one child relates his severed body to that of her mother’s friend, found dismembered in a motel. Again, in the following poem “Milagros,” we see the dismembered body—“a leg, ham-hocked at the joint, / or an arm, separated from the shoulder joint”—this time pinned to an altar. These dismembered bodies are both familiar and unfamiliar—the parts are recognizable as pieces of something once whole, now lifeless, disconnected, reduced to useless parts. In this fragmentation, Karetnick also expresses the unrelenting desire to see things whole, despite it’s futility—the desire for resurrection or rebirth, as “a woman’s last true artifice / is unswerving belief in a virgin birth.” Though this line has obvious religious connotations, I believe it can also be interpreted as the desire for creation without destruction—to create something whole without annihilating its parts.

This desire for wholeness in a fragmented world is consistently articulated, and consistently thwarted by various barriers—cameras distance the photographer from her subject, photographs fail to represent reality (as “there’s no real reflection of time”), girls become bifurcated from their “digital selves,” windows crop the world like a lens, subjective perception becomes a veil, and skin becomes a shroud. These poems play an unceasing game of hide and seek—revealing and concealing pieces of the self and world and traversing the permeable barriers between interiors and exteriors in the search for a continuity that perhaps does not exist or cannot be comprehended.

Karetnick’s language only intensifies the doubling and mirroring effects of her content with heavy use of repetition and rhyme, at times in traditional forms such as the villanelle or sonnet, and at times in forms of her own invention. Her poems repeat lines, sounds, and images as they progress through the stanzas, forcing the reader to recontextualize each again and again. This, too, is an uncanny experience, as the lines are familiar yet unfamiliar, as the same words and sounds are seen again in a different space in which they acquire new meaning and sometimes obliterate the old.

In the last poem of the book lies the most epitomical and perhaps most profound couplet, as the lines of a dialogue are interwoven in pairs, one speaker’s words italicized below the other’s:

And here, in these lines that mirror and distort each other, that echo and negate each other simultaneously, Karetnick distills the frustrations of her preceding poems, of the claustrophobic spaces in which conceptions identity, truth, and reality are as close as they are far away, reflected, fragmented, and distorted through continual mirror-tricks.