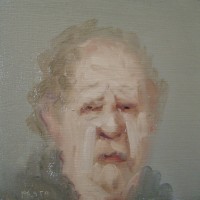 PORTRAITS OF AGE
by Donna Festa
Interviewed by Anastasiya Shekhtman

Where does your fascination with faces come from? When I was a young girl, I went with my mother on a regular basis to visit her sisters. She was the youngest of nine children. The three youngest sisters—my mother Betty, Cassie, and Tucker—were the core of the group, but others would join in on different occasions. You never knew who was going to be at the kitchen table when you arrived.

These visits were either at my Aunt Tucker’s house (Sylvia was her birth name, but, due to her resemblance to the actress Sophie Tucker, she is still called Tucker at 90 years old), or my Aunt Helen’s house, the oldest sibling, in South Jersey. Aunt Tucker always had a homemade cake, and most always a pot of pasta sauce slowly simmered on the stove all day, filling the house with an incredible aroma. Aunt Helen had a homemade pie to serve with the tea, and a cat curled up on her large, soft chest. When I wasn’t shamelessly throwing myself at Alvin or Sam, the dogs, I listened to the conversations about my aunts’ lives and studied their faces.

The personality of each aunt seemed quite apparent at first glance. Helen was serene in her beauty and kindness. Though her life had been quite difficult, she was such a good person that her inner beauty radiated despite the sadness in her eyes. Thelma was quite the opposite of Helen. There was a coldness about her that seemed to set in her mouth, eyes, and tongue. The absolute worst of these visits were when Uncle Raymond, Aunt Helen’s ex-husband, was present. I feared him terribly and panicked at the sight of him at the table. He wore mean all over his face.

I’ve always been extremely intuitive and hyper sensitive to my surroundings. As a cripplingly shy child, I sat quietly, observed, and felt deeply. I never stopped.

What do your portraits suggest about age? When middle age hit, I was faced with the effects of aging. As always, painting is how I coped. Aging is a privilege, but we sure go through so much on the way to old age. All the troubles, difficulties, and heartaches take a toll on us, both mentally and physically. Often, a face will be so painfully sad or burdened that my heart sinks at first glance. People carry so much with them. I once heard a quote that I’ll never forget (though, regrettably, I do forget who said it). In his interview on PBS, an author said, “Be kind. Everyone is carrying a heavy burden.”

That is what I felt when I saw the men and women at work in the South Jersey glass factories, where I earned my tuition money. They worked hard in difficult conditions. It showed on their faces.

Would you consider your portraits critical or sympathetic? On occasion, I am critical in my portraiture, as in “The Gossips.” But mostly I aim for empathy. Having struggled with major depression since age eight, I often feel things too deeply. At times, it seems that I can feel the pain of the whole world, which becomes overwhelming and unbearable. While I’m focused on the feelings I read from each person I paint, it’s impossible not to project my own emotions onto them. I’ve been asked why so many of the people in my portraits look sad. That comes from me.

What aspect of painting people appeals most to you? My love of paint was immediate the first time I used it. In kindergarten, my wonderful teacher gave us all a large sheet of paper and tempera paint. We were allowed to paint on the floor. I was next to my best friend, Tim. It was one of the happiest days of my life. The paper was slick and smooth, and the paint was thick and fluid. I fell completely in love with the feel of the paint gliding across the paper. I couldn’t stop myself from completely over-painting my picture. I knew then that I wanted that to be my life.

Now my medium is oil paint, but I still must have a slick surface to work on. I prepare my panels to be as smooth as possible, a continuation of my happy kindergarten painting experience. The language of the paint is as important to me as the subject matter itself. I’m completely drawn to loose, fast, thick paint strokes. My work is never loose enough for me, so I keep working on that.

You feature both strangers and acquaintances in your work. How does your level of relation to the subjects affect their portrayal? Whether I am painting a stranger or an acquaintance, my approach is the same. What do they tell me about themselves that I hope to capture? What are they thinking? What is it that weighs on them? I know the answer to some of these questions when painting someone I know, but have to guess with someone I see at random whose face interests me so much that I have to paint it.

1. Frank, 2013, oil on panel, 6 x 6 inches
Frank Smith was a self-proclaimed preacher from a small town in southern New Jersey.  He and his sister were close with my mother’s family. 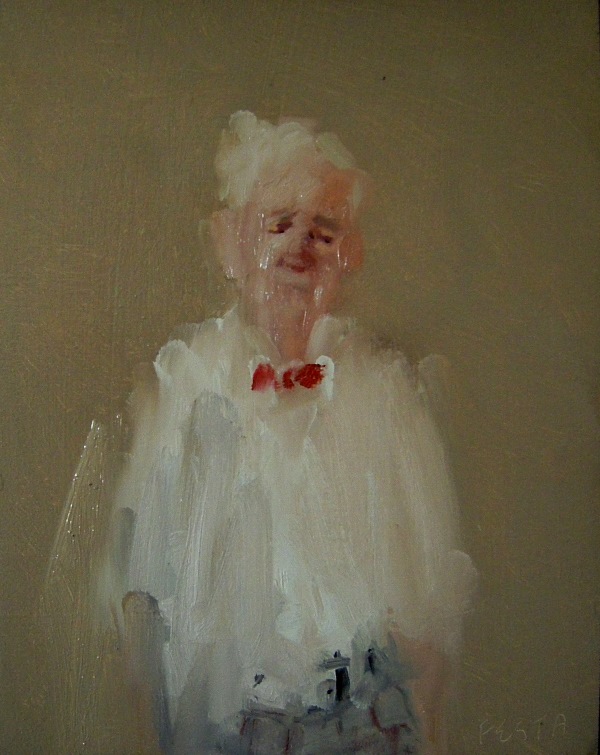 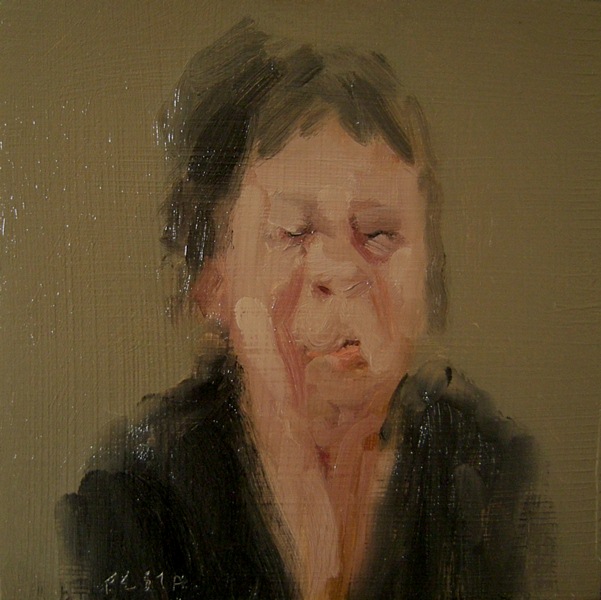 3. Woman with a Pink Hat, 2012, oil on panel, 6 x 6 inches
My husband and I lived across the street from a church in West Grove, Pennsylvania.  We saw many members of the congregation come and go each Sunday including the Woman in Pink Hat.

4. Liquor, 2009, oil on panel, 5 x 8 inches
Liquor was my Uncle Jim’s nickname.  He both enjoyed it and made it during Prohibition and after.  He was severely abused by his father, a veteran of World War II who fought on the front lines, and my mother’s oldest brother. 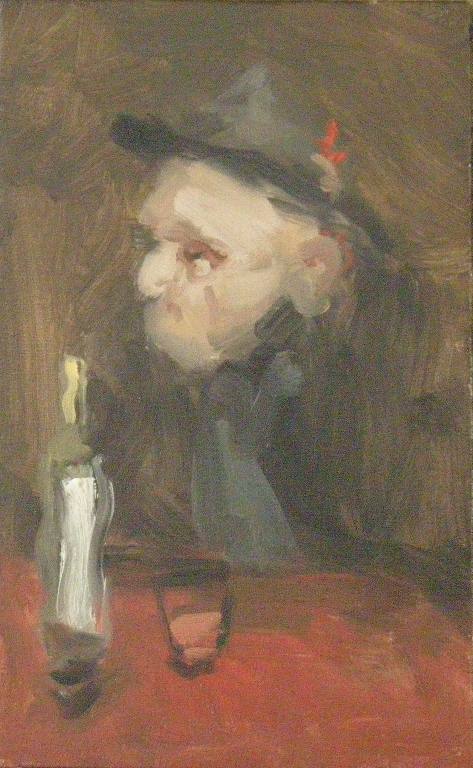 5. Woman with Oxygen Tube, 2012, oil on panel, 6 x 6 inches
I saw this woman at a family function from across the room during the social time of the event. 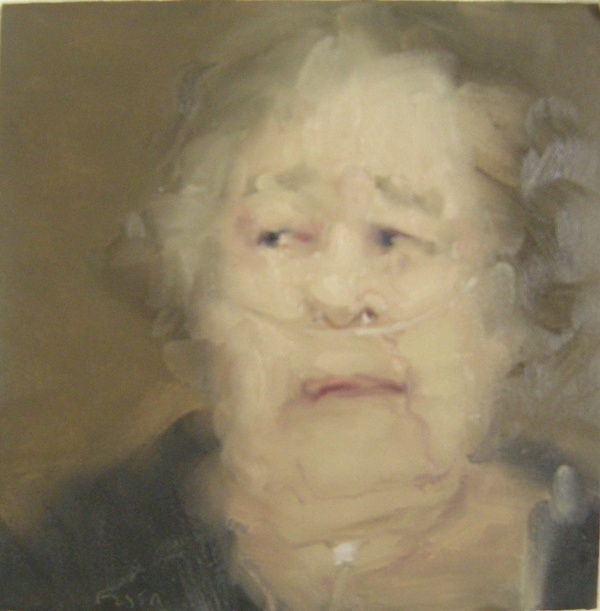 6. Woman in Wheel Chair, 2011, oil on panel, 5 x 7 inches
The day I saw the Mummies of the World exhibit at the Franklin Institute this particular woman caught my eye. 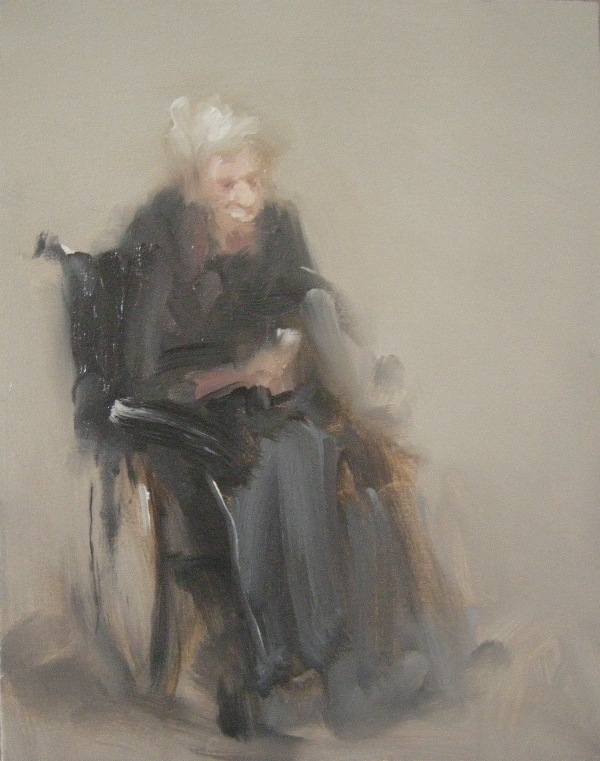 7. Woman With Thinning Hair, 2012, oil on panel, 6 x 6 inches
Many of the people in my paintings I’ve seen while waiting for my prescriptions at the drug store, including this woman. 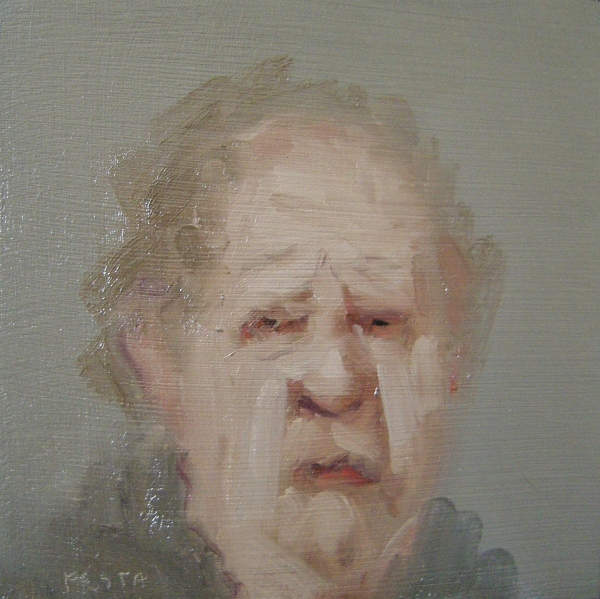 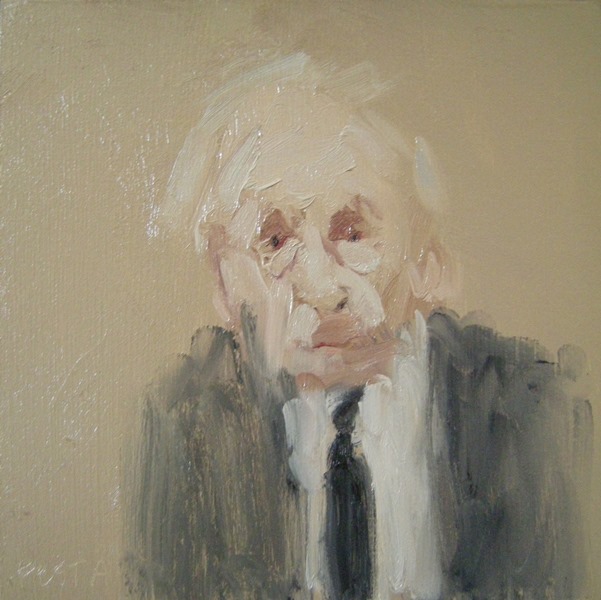 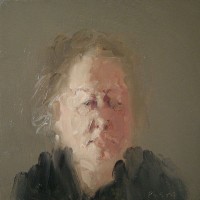 Donna Festa has paintings and drawings in both public and private collections, including the State Museum of Pennsylvania. She has exhibited in New York, San Francisco, Chicago, Philadelphia, and Miami. Her work has been published in Fresh Paint Magazine, October, 2013, INPA, vol. 1 , 2011, INPA, vol. 2, 2012, and New American Paintings, Mid-Atlantic Region vol. 51, 2004. Donna is a graduate of the Pennsylvania Academy of the Fine Arts in Philadelphia, Pennsylvania, where she earned a four year certificate in painting; the University of the Arts, also in Philadelphia, where she received a BFA in painting and teacher certification; and the University of Hartford in Hartford, Connecticut, where she received an MFA in painting. Her studio is in her home in Bangor, Maine. 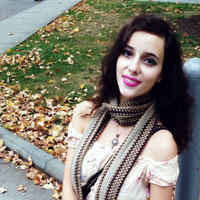 Anastasiya Shekhtman is a senior Communication Design major at the University of Pennsylvania, minoring in Russian and Creative Writing. Displaced from Ukraine at the age of four, Anastasiya is currently chasing childhood images, sorting the real from the imagined, only to blur them again in her work. Until recently, Anastasiya lived in a love triangle between writing and design. Then she found her heart in the overlap. Her website is www.anastasiyashekhtman.com.