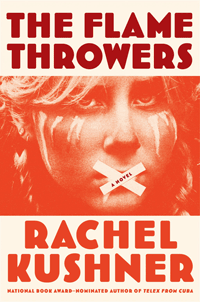 Early in Rachel Kushner’s occasionally frustrating but fascinating book The Flamethrowers, the protagonist sleeps with a man she’s only just met. She naively believes that her encounter with the attractive, nameless stranger is going to lead to something more meaningful, and she is more than a little disappointed to find him gone when she wakes the next morning.  He leaves a mark on her, though, both by taking her virginity and also by giving her the only name we will know her by, Reno, after the city she was born and raised in. It’s a fitting name for the heroine of this novel, which is, principally, about starting over, on both an individual as well as national level.

All the characters in The Flamethrowers are interested in reinvention; they ache to transcend their compromised human past into a more perfect, harmonious present and future. Fresh out of college with a degree in film, Reno arrives in New York, ready to live. She’s a born gear head, she loves motorcycles and speed, and she’d like to do something with her camera, but all she’s got is some grainy film she’s shot of her neighborhood. Reno is a woman in search of direction and purpose. She doesn’t so much know what she wants, as she knows what she doesn’t want: to stay at home and end up a switchboard operator liker her mother.

At least, she doesn’t know what she wants besides her boyfriend Sandro, a fortysomething Italian artist and the heir to the Moto Valera motorcycle company. Sandro is running away, too, from the weight and obligation of his family’s company and its legacy of fascism and exploitation. Together the two of them navigate the avant garde art world, where everyone is either desperate to become the next big thing or is a jaded professional, too cool to care about the very thing they’d until recently worked so hard to achieve. In art, like everything else, people are looking to change themselves, to become something new and better, the thing they always truly were.

After breaking the women’s land speed record in a Valera car, Reno, along with a reluctant Sandro, agrees to go to Italy and participate in a publicity event for the company. Once there, she finds herself in the middle of a revolution. Rampant poverty and exploitation have led to mass demonstrations and rioting, much of it directed at the Valera Corporation. Reno sees a country engaged in reinvention on a national scale, waging a war for workers rights against Sandro’s own company. She is brought face-to-face with the politics, both social and personal, that fuel Sandro. As she’s drawn further into the Valero family drama, Reno finds herself caught up in a life-and-death conflict between the workers who are struggling to transform Italy into a more equitable country and the old world aristocracy, who refuse to go along with the change.

There isn’t a whole lot of plot in The Flamethrowers. It’s a series of scenes, with Reno in or around the center. She’s an appealing contradiction of a character: fully realized, yet, at the same time passive, and a sort of cypher. We learn very little about her, and she has very little agency. She mostly follows the lead of others, often her older glamorous boyfriend. Many of the vignettes involve her listening to other people talk or just observing the world around her. But she’s sharp, and her thoughts are fascinating. Reno is a fully formed portrait of a woman in her early twenties– that is, a person still struggling with who she is and who she wants to be. She looks to others to give her clues of how people behave, and she yearns to find a place for herself among them.

Occasionally the book digresses from Reno’s journey to look into the lives of some of its other characters, most notably Sandro’s father as he grew from a child growing up in Egypt to a wealthy Italian titan of industry. These chapters are interesting, and give Kushner an opportunity to explore her themes of reinvention and the mixture of the personal and political from other perspectives than Reno’s. But these digressions lack the urgency and emotional investment of the Reno chapters. One of the dangers of presenting such a well-realized, intriguing character at the center of your book is that the supporting cast can seem inconsequential by comparison.

The Flamethrowers has much to say and many moving parts. It doesn’t always fit together smoothly, and the ending feels unsatisfying—although probably deliberately so. But those quibbles aside, it’s a dense engaging read whose moments of insight and brilliance far outshine its occasional missteps.