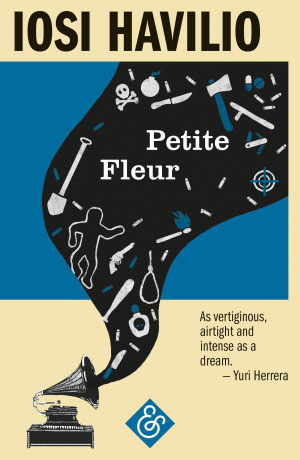 The greatest allure of fiction is the unexpected. Every good book surprises you, and every great book surprises you in a way that, after the astonishment is complete, feels wholly natural—this strangeness couldn’t have happened any other way.

Iosi Havilio’s Petite Fleur is a great book because it is a work of surprises intimately knotted around each other. The plot twists and writhes. Murders and magic lead to diatribes about jazz fusion that leads to rebirth and love and examinations of the anxiety of parenthood and marriage. The unexpected is constant, the satisfaction complete.

The novel is about an Argentinian man, José, the narrator, and his startling power. In a starburst of fury, he discovers that he can kill without consequence. Every time he murders his waddling, jazz-and-whiskey-obsessed neighbor, Guillermo, the neighbor returns to life the next day with no memory of the violence from the night before. Each killing is set to a take of the song “Petite Fleur,” of which Guillermo owns 145 variations— that’s the kind of guy Guillermo, and many of Havilio’s characters are: passionate, pretentious, and innately killable. This first surprise propels the book as it opens. The rest of the story is too fun to give away in great detail. Spoiling the book’s madcap plotting is to ruin its essence, and to take away from Havilio’s mystic accomplishment.

In a book dense with surprise, Petite Fleur’s most stunning achievement is that it works despite how much it plays with things that should fail. The novel takes form in one breathless, 120-page paragraph. No matter the subject, Havilio never gives the reader’s eyes or mind a rest. After the first killing of Guillermo, José sprawlingly describes the nit and grit of the action, “The blade went in far enough to knock his head out of line and with the same momentum again, barely more deliberate, the metal edge reached halfway through his neck. At least that’s how it looked to me, although it could have been a lot less than that, or possibly more.” This pendulum style of writing, with every presented reality undercut by unknowing, insecurity, is initially exhausting, but its constancy builds a portrait of an anxious mind that is compelling and convincing.

Beyond its aggressive style, the novel turns other on-paper flaws into virtues: it imbues, praises and mocks Tolstoy, Dostoevsky, and Jodorowsky all at once; it contains plot points that verge on cutesy (a firework factory goes up in flames, a stumped writer rediscovers his passion); it mirrors the spiraling repetition and the anxiety and fury that comes from boredom and loneliness.

To read Havilio’s novel is to experience the joy of watching someone bludgeon, stab, incinerate and smother the rules of writing. Every time Havilio introduces an errant plot point or a violent departure of character—and there are many, especially considering the book’s slenderness—there is a natural gut check that says but why? Why the killings, the cruelty, the nature walks, the lengthy scene dedicated to Elektra Complex fulfillment? The answer, which is maybe unsatisfying in its obviousness: because Havilio can, because he must. The world he’s built somehow demands it all. 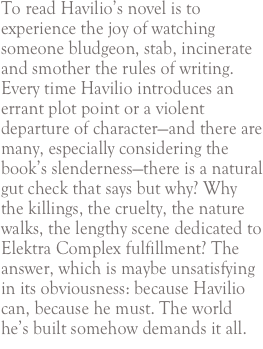 Havilio’s alluring, enigmatic and fun prose is the grand unifier through all of the book’s oddness. It keeps you steady and intrigued when the book repeatedly sheds its skin. From the first sentence—“This story begins when I was someone else.”—Havilio sets a tone that I can only describe as seductive. You are in on the book-length joke the narrator is telling, but also scared by its intensity, its disassociation.

Repeatedly, José, an unemployed homemaker living in a machismo-infected society, finds his only power in the primal. After many of the killings, he makes passionate love to his wife, Laura. He fantasizes about the local baker’s assistant in a similar voice as when he fantasizes about murdering the cult-leader/spiritual-healer Laura may or may not be sleeping with. (The healer, by the way, is a self-described, and unconfirmed, disciple of Jodorowsky that advocates for the aforementioned Elektra-fulfillment, and another brilliant comic character.) For José, and, for many of us, one suspects, sex and violence are kin because they are both actions that follow the call of impulse. José feels fury and eroticism with the same parts of his brain.

Writing about sex is not an easy thing because, like hearing someone describe a funky dream, you really had to be there to understand the wonder of the experience. But Havilio manages to convey the automatic pleasure of making love, particularly to someone you know intimately. It’s rote until it’s surprising, it’s a relief and, at times, a stress or a symbol. José and Laura have a child and a life together. They have sex frequently when they’re happy and less when they’re not. José pines for other women and obsesses about Laura’s fidelity and is willing to give into kink and fantasy to help his wife achieve psychological absolution. Though their relationship is often tormented, their sex life is an interesting through-line that combines the domestic with the perverse. This juxtaposition is both tender and horrifying.

Writing about violence is maybe easier, or at least more appealing. Few of us know what it’s like to act out on true violence, which means reading about it is exciting in a way that reading about sex isn’t. Still, Havilio manages to infuse the violence with freshness and, more importantly, comedy. José’s freedom to kill without repercussion makes for something like a running joke across the book—every week,  José goes to “return the spade”—the phrase quickly becomes a continued euphemism for murder, to hilarious effect— he borrowed from Guillermo. The two build a rhythm: they talk, they drink, they listen to records, and then José plants the spade in Guillermo’s neck, or lights him on fire, or bashes his brains in, before returning home to look after his baby or fret about his increasingly depressed wife. Each incarnation more dramatic, more indulgent. José gets to play God one night a week, and the result is a delicious brand of asylum humor. It’s when sex and death meet that the book strikes its most refined comedy—a type of joke that is right on the precipice of upsetting the reader, “partly due to the incomparable lust that violent death arouses, I took Laura on an acrobatic sex voyage that lasted till dawn.” I can think of few writers that do stark deadpan as well as Havilio.

The translation work by Lorna Scott Fox is wonderful because it imports Havilio’s gymnastic approach to writing without sacrificing José’s conversational tone. Another pleasure of Havilio’s style is that it feels as if José is telling you one long story as you sit beside him. He’s a smart narrator, unafraid to use words that surpass dollar-bin colloquialisms, but also a narrator that is convincingly retelling a story he can’t quite believe happened. In the retelling, José finds another form of power.

It is tempting to talk about Petite Fleur, Havilio’s fifth novel, in the way that one always talk about things that are challenging, confusing, absurd and comic: it’s a nightmare, a fever, it’s Tolstoy on acid, a vertigo-romp through the nether. But the use of these words is usually shorthand for saying that the work inspires that perverse quake of relation, a narrative that beckons the oblivion within us all. An oblivion that few of us, if any, understand.

So let’s leave it as it is: Petite Fleur is a book about that queasy feeling where the primal, the inexplicable, and the contemporary mash together. And its impact, its askew joy, can only be truly understood by being there, thumb on the page.

August Thompson has worked as an editor and writer since graduating from NYU in 2013.  When he’s not working on fiction or watching the Boston Celtics, you can find him at the movies.