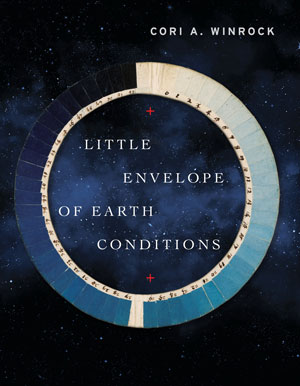 I read Little Envelope of Earth Conditions in late June, when COVID-19 cases were skyrocketing in the world and the nation—and at home. The May 24th New York Times front page, which listed the names of the 100,000 American coronavirus victims—a very public display of mourning and grief—was at the forefront of my memory, as were the more personal ways that I was mourning the loss of traditions, previous ways of life, time spent with grandparents and my fellow high school students alike.

Throughout her second collection of lyric poems, Little Envelope of Earth Conditions, Cori A. Winrock explores the experience of mourning: specifically, the idea that grief is an ongoing, recurring experience that never truly goes away. It is simultaneously universal and intensely personal. She tells a compelling narrative about the loss of a mother and child, spanning from the vast emptiness of space to an ambulance in a parking lot to a placid meadow on the edge of a lake. The incalculable physical distance this book of poetry travels mirrors the incalculable distance a grieving person must travel to get back to earth.

I admire the cohesion of theme throughout Little Envelope of Earth Conditions. The very first poem in the collection, “What Would Happen to Your Body in Space Without a Spacesuit,” is set in outer space, a lonely place of physical isolation:

We learn to sleep
with our hands in the dark

of strangers’ mouths, keep our heads singing
in hopes of bringing our lost

helmets back. How warmblooded
the moon must still seem when seen from the earth.

Later in the collection, Winrock moves to another place of grief—this time on earth—with the strong, surreal images of “Love Poem in a Time of Ambulances.” There is confusion in the core narrative of this poem, to reflect the disorientation of grief:

……….O altar of resuscitation… the ambulance as ablaze as the virgin
……….mary’s heart. And so what if these are my marys
burning? Or that I meant to say
……….my mothers.”

And O to be the curve of the ambulance’s bones,
……….its frame picked to glittering
in the parking lot

This poem’s speaker takes on different perspectives when talking about the ambulance—on one hand, the ambulance is a religious object filled with live-saving importance, described as an “altar” burning “ablaze as the virgin Mary’s heart.” But on the other hand, the ambulance is an animalistic object, described as a monster with “bones” and a “picked … frame”. The confusion in this poem continues with confusion about bodies. The speaker is not sure to whom some of the bodies mentioned in this poem belong—are “marys” burning, or “mothers”?

In the collection’s last poem, “How to Preserve a Spacesuit,” Winrock has moved locations once more, not to an ambulance or the depths of outer space, but to a meadow at the edge of a lake.

………….+
The birds are whistling better stitches

+
to the meadow… where we kneel

+
to fill each spacesuit 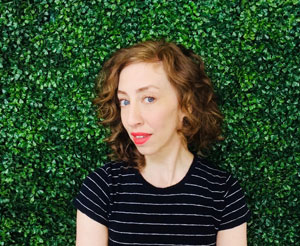 The + sign is used to explore the many alternate possibilities, or what-ifs in grief. Emily Dickinson used this sign in her poetry as well, to signal and explore alternate words, lines, or phrases. It’s interesting, too, that + resembles a sewing stitch; imagery and diction of sewing, of mending, of fixing the bond between mother and child are present throughout this poem. In it, the mother and child have reached the end of their journey; they are not in outer space anymore, but are connected, or stitched, to the earth. They even go to “fill each spacesuit / with flowers then light / them on fire,” indicating that they are at the end of their journey—spacesuits aren’t needed back on earth. Like the title mentions, the spacesuit is preserved—its use is pretty much over, but it’s not buried or thrown away. It’s still present—much like grief.

Winrock leaves the reader at this placid, earthly pond, at the end of an extensive journey. Her intricate narrative incorporates quotes, unusual punctuation, and facts about sewing, outer space and moon landings. I admire her skill in bringing specificity and lyricism to grief, an overwhelming emotion that might at first seem insurmountable, but little by little, stitch by stitch, can be mended. 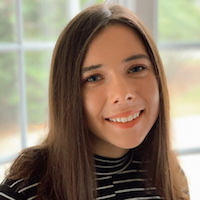 Charlotte Hughes is a high school junior from Columbia, South Carolina. She has attended the Iowa Young Writer’s Studio and is a reader for PANK. Her poetry is published or forthcoming in Waxwing, PANK, and The UK Poetry Society, and has been honored by The Kenyon Review, Third Coast Magazine, Princeton University, and the Scholastic Writing Awards.