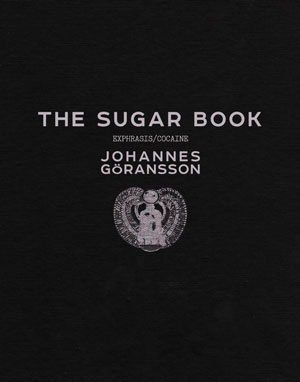 Antonin Artaud gave us the Theater of Cruelty. He “for whom delirium was/the only solution/to the strangulation/that life had prepared for him.”

Now Johannes Goransson, in the ironically named The Sugar Book, gives us a poetry of cruelty. It is the necessary car wreck that brings the Jaws of Life. The book is a whisky genre-bender in a haunted Los Angeles, where the “I” walks out on his son, fucks the homeless, reflects on scrotums, obsesses about tits, his hard-on, hot bitches, taxes, capitalism, the value of poetry (it’s worthless), noctuid larvae, and “the sepulchral chambers of the law.” Like many outrageous, seemingly misanthropic writers, he is at heart a moralist. The first section in fact contains a poem about immigration (as always, among many other topics). “The Law Against Foreigners Involves Mostly the Body” offers this withering insight:

It’s also interested in my body when dogs bark at my
genitals but it pretends that’s just evidence of a social
conscience. It wants to find the human in me, even if it
takes ripping this lamb mask into a thousand shreds and
hanging it up on the wall.
And feign outrage when I grow numb.

The speaker’s scathing appraisals scald himself, because conscientious objector or not, he is part of the law. Political poetry often gets a deserved bad name, but Goransson hits themes hard yet moves along, often in the very next phrase, to trenchant comic appraisals of his own filthy habits, lit up by indeterminacy.

This hotel just might collapse
because my wife and I are really siblings
and when we fuck we fuck with the white race
but we sniff it from Asian bodies.
Small-boned Asian bodies.
Degeneracy is something that happens to white people.
In their art. 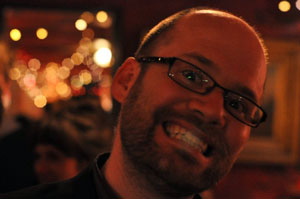 At first I found the almost-prose flat-footed, relentlessly declarative in its lines. Then I fell into the groove. Nobody refers to a jackhammer as graceful, but it gets the job done. The recursive qualities are strong, with many repetitions of exact utterances in new contexts, creating mindful repetition, which substitutes for any elegant rhythmic play. We follow images of him and his wife having sperm-copious sex on many pages, as well as his son and daughter wielding premature factoids and fringe behavior: “My daughter tells me that the proximity of electroshock/treatment can cause sterility” and “I have/a photograph of the children painting their faces with/resin and shark blood and they are smiling.”

Poems made of lists or one-sentence phrases are hit and miss. I would have edited most of them out in this slightly overabundant, meaty (the metaphor is apt) volume. They aren’t bad, they just don’t hit the high-water mark of the book and don’t bring forth such brilliant lines as these from “Gang Bang”:

I can’t tell the difference anymore
between mass graves and Duchamp.

The aesthetics of Los Angeles seem based on whore-nature
and victory dances.

My son is poster material.
Is foie gras cannibalism is “sounds okay” is puking silk.

I’m a child of Reason so I ransack the dolls.

I couldn’t help dwell on the conspicuous absence of a table of contents. Not unusual, yet I found myself flipping around quite a bit to find poems I wanted to read again. That attitude, like the tone of The Sugar Book itself, is “deal with it.” While inconvenient, perhaps this is fitting in a tome in which vomit, semen (lots and lots and lots), and mercury poisoning drip from page after page. I’m not sure that even Rimbaud would title a poem “My Sperm Gets in the Flowers.”

Yet there is room for Dickinson, and a fascination with ekphrasis, with the referenced “works of art” being, variously: mascara, a harlequin jewel bug, a bark beetle, and most of all, porn—a wax cock, for instance. Here is a typical sublime moment in Sugar, from “Ekphrasis/Cocaine”:

I can hardly breathe when I read poetry out loud
or when I’m hanging like a lantern from their rape tree.

This is exactly what Kant meant when he described the sublime as a rapid alternation between the fear of the overwhelming and the peculiar pleasure of seeing that overwhelming overwhelmed: a raging storm that “takes our breath away.” This book is full of a genetic hybrid of Billie Holiday’s strange fruit—as a song that became an ekphrastic poem—the ugly philosophical object of contemplation transmuted, by its very violence, into something lyrical.

Pablo Neruda played with this idea back in 1925, with feismo, the art of the ugly:

the perfume of plums that rolling to the ground
rot in time, infinitely green.

The Sugar Book is a full-on assault on the senses, the sharp point of a blunt instrument. I don’t think anyone would accuse this book of subtlety. Its virtue is precisely its overkill. Excess, at its best, becomes a form of complexity. The outrage, while often smirking, runs deep, forcing a core of sincerity into what might easily have become a flippant, cynical take on urban ennui, as I feared when facing such crackling ironic titles as “At the Shrine for the Dead Starlet,” or “ The Heart of Glamour.”

Could I do with fewer pigs, less easy pussy, fewer flies on flesh, supernumerary whores and corpses? But this is a take it or leave it proposition. Once you edit out a few, you have to cull them all and before long, there’s no book left. Besides, each time I was set to cringe, those imagistic “defects” came into alignment.

The topic is virgin violence.
I pretend to know my way around. I pretend to translate
images into words but if there’s one thing I’ve learned
about translation: it’s about corpses.
Dig me up in 100 years and I’ll tell you about children
dying outside my window. How they smelled like rotten
fruit. So what.
Tonight whores are going to sew in my dolls.
There’s a worm in my hand and it’s small and white.
It comes from the flowers some whores gave me last
night while I was walking home with my white face and
shaking hands.

The Sugar Book bristles, and you’ll finish it with broken spikes in your palms and paper cuts on your fingers. Yet underneath that punishment lies the spirit of Ezra Pound, that notorious, pig-headed misanthrope with all the wrong attitudes, yet whose disbelief in ease could just as easily pass as compassion.