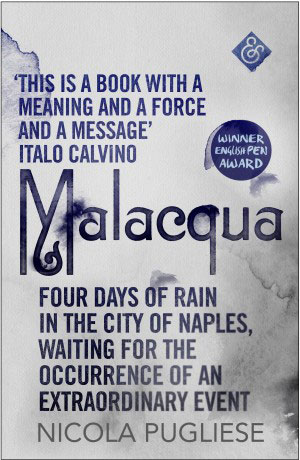 MALACQUA
by Nicola Pugliese
translated by Shaun Whiteside
And Other Stories Publishing, 198 Pages

It begins with the sea. Out the windows, down the alleys, on the perpetual edge of the city’s consciousness. In Nicola Pugliese’s Naples, the sea is everywhere. “From the street,” he writes, “loneliness falls gracefully away to the sea.”

A few years before the main events of Malaqua transpire the government and police of Naples decide to block access to the beach on a beautiful summer day. For a while, the children stare angrily at the line of police along the shore. Eventually the children slink back into the shade and despair of their homes and courtyards. But the sea, not one to be defeated by local government, begins to rise. It rises until it reaches the first row of houses, then moves farther into the city, leaking into basements, waterlogging wooden boards, wetting socks and shoes and the hems of dresses and pants. The police come to realize they cannot guard the sea, and so they leave.

“This had in all likelihood been an alert, a warning significant in its way,” the narrator informs us. The alert is for the events of October 23rd through 26th, the four days over which the novel takes place. The four days of rain.

Anyone who picks up And Other Stories’ edition of Malacqua, the first English translation of Nicola Pugliese’s Italian novel from 1977, will be immediately alerted to the strange weather which serves as the novel’s catalyst. Emblazoned across the book’s cover is Malacqua’s unofficial subtitle: Four Days of Rain in the City of Naples, Waiting for the Occurrence of an Extraordinary Event. Before even opening the book, the reader is clued into Pugliese’s supreme fascinations: water and Naples. And of course, the collision of the two.

The deluge brings chaos to the streets of Naples. Giant sinkholes open up and rescue workers swear they hear voices coming from the pits. Unearthly screams are heard throughout the whole city, seeming to emanate from the 13th century Maschio Angioino (also ironically known as the Castel Nuovo). Later, five lira coins will begin to play music that only children can hear.

The novel is divided into four parts, one for each day of rain, and loosely follows the perspective of Carlo Andreoli who, like Pugliese, is a journalist covering politics and local events in Naples. Pugliese was born in Milan but spent most of his life in Naples as a reporter. Malacqua, his only work in another genre, was published at the insistence of Italo Calvino by Italian literary powerhouse Einaudi, who also worked with Calvino and other luminaries including Natalia Ginzburg, Cesare Pavese, and Antonio Gramsci. But after quickly selling out its first print run, Pugliese decided to pull the plug on the project. No more copies were printed until after his death in 2012. This translation, by Shaun Whiteside, which comes 40 years after the original, is the first English version.

Pugliese is a playful writer, and many of the novel’s most enjoyable moments come from his quirks of language. He describes a mirror as “returning” a face to its owner. Waiting for the rain to stop is a “gruelling, progressive illness.” The weight of silence becomes “an airborne jellyfish, a transparent dream.” Not all of his experiments in language are as pleasing and strange, however, and at times his style can feel a bit forced, almost like a missed attempt at Thomas Pynchon. 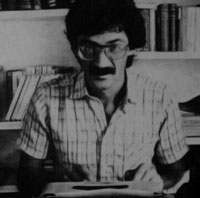 And there are other aspects of Pugliese’s writing that disappoint. Even a Republican Senator would have a hard time denying the author’s misogyny. Men are often visually assessing women, and in various interior monologues from the viewpoint of Neapolitan women Pugliese justifies sexual harassment, office affairs, ogling. “Ultimately a hand on your backside,” Pugliese writes, “is always an act of homage, a gesture of esteem.” The way that Pugliese not only allows but encourages his male characters to harass women, and then uses his omniscient narratorial powers to have women apologize for and accept this treatment as not just okay but almost desirable, is sickening at times. It says much about Italian culture (and literary culture in general) of the 1970s that sentences like the one above were not outside of the norm.

Experiencing something so outdated and uncomfortable in the novel, however, made me more surprised to find a theme in the first two chapters that seemed downright contemporary: what appeared to be an attempt to grapple with climate change in fiction. Or at the very least, horrific weather and climatic events, and humans inability to do anything about them. 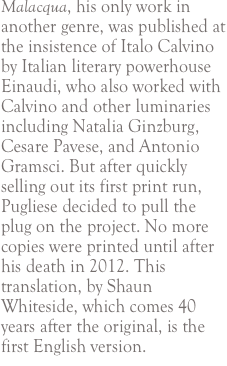 Pugliese writes, “With all that water coming down and coming down, and when you were about to say: there, it’s stopping now, you didn’t have time to open your mouth before the water violently returned, a harsh and predetermined rancour, an irreversible obstinacy.” The final words, “a harsh and predetermined rancour, an irreversible obstinacy,” could very well be used to describe the horrible repercussions of the changes we have wrought on our planet. Is he answering the call of recent writers such as Amitav Ghosh and Margaret Atwood to include and incorporate climate change in fiction?

Pugliese does not use the words “climate change,” and nor is it likely that was he thinking in those terms when he wrote the novel in the 1970s (the advancing water feels akin to Calvino’s warning, in Invisible Cities, of the “inferno” of inhuman urban sprawl). However, despite any direct link, many of the themes and tropes that contemporary writers find important in integrating climate change in their fiction, in “climate fiction,” or any other genre, are present in the early pages of Malacqua. Weather, catastrophic events outside of human control, play a stronger role in the plot than the actions of any one person. And Pugliese is deeply attuned to the ways that the rain is simultaneously terrifying to the Neapolitans and, like climate change for many in the twenty-first century, quotidian. Malacqua is not a tale of apocalypse, but a tale of how humans adapt and survive in the face of bizarre and catastrophic climate events. The deaths of seven Neapolitans during the rains is described in chilling terms by local members of government and the police. “A mournful event, certainly, a tragic event, but also predictable, in some respects, from the ancient perspective of a city that lives its life in a continuous form of multiplication.”

Later in the novel, however, it becomes clear that Pugliese’s use of these non-human devices is more metaphorical than political. The story (almost a parable) of the sea rising above the shore and entering Naples to seek out children barred from swimming, should’ve been a sign. Not just to the inhabitants of Naples, but also to me. This is not a book about climate change. It’s just a novel with a touch of magical realism.

About this point in the novel, Pugliese’s narrative begins to drag. His strengths lie, like many good journalists’ do, in deftly stitching together narratives and quickly limning characters and situations. The novel glows when it is discussing the mood of crowds at the beach, people on the street, a group of police and government officials searching a building. When the rain overflows open sewers in part of the city, Pugliese writes, “Also gritting his teeth and muttering fuck off was Biagio Di Sepe, 45, from Avellino, who was determined not to give a toss and had put on his rubber boots.” Pugliese’s Naples is a fractured place, more town than city, still recovering from the war. But despite its bleakness, there is something like love in his descriptions of Naples and its inhabitants, shot through with a touch of symbolism and literary finesse. Neapolitans look out across the sea at night towards Capri, “outstretched and remembering, as alien to the city as an undeciphered tower, close, yes, so close, and far away, too.” Neapolitans who may not have much still have their city, their dialect, which one character calls, “not a literary invention, an artificial construction made by experts and linguistic experimenters, but the most authentic, the most genuine and the most felt expression of an entire people.”

But when he turns his focus away from the city to dip further into the lives and minds of a smaller handful of Neapolitans, he becomes moralistic, even preachy. In these sections, the writing loses a bit of its luster, and the novel begins to feel a bit overly “artistic.” (The final 51 pages of the book take place in the protagonist’s thoughts while he is shaving. I am not against this experimentation, but the decision does not seem to add to the novel. It does not enrich the sense of the character’s emotions or the tableau of Naples. It feels, rather, like a good writer trying hard to seem clever.) Instead of these interwoven stories giving a sense of Naples as a whole, it makes the book feel more curtailed, insular. Each character seems to be living inside her own reality, her own space, which no one else can enter. Perhaps in its way that is Pugliese’s point. That not even a semi-apocalyptic event can make people communicate, break down the barriers of tradition, gender, and class. By the novel’s end, I too felt like the Neapolitans driven inside by the rain: claustrophobic and melancholy, craving a breath of air, a hint of blue sky.