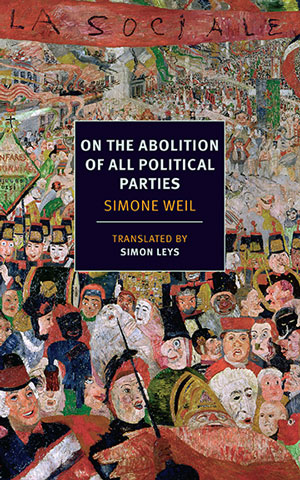 ON THE ABOLITION OF ALL POLITICAL PARTIES
by Simone Weil, translated by Simon Leys
New York Reviews of Books, 71 pages

When Albert Camus heard that he had won the Nobel Prize in 1957, he ran and hid. Averse to the frenzy of the press, he sought refuge in the home of a friend. He landed at the apartment of the family of Simone Weil in Paris’s 6th Arrondissement. Another friend, Czeslaw Milosz, in an essay on Weil, recalls that home fondly. He notes the humble, ink-stain-covered kitchen table, and he recalls the generous hospitality of Mme. Weil, mother of the young philosopher. He all but represents the quality of morning light illuminating the desk at which the young Weil would do her thinking. He never directly states that by 1957, Weil had been dead for almost fifteen years.

Simone Weil’s short 34 years leave a high-water mark for any politically committed life. Her primary occupation was education, one likely reason for her lucid and straightforward prose. After a precocious youth, she attended university in Paris in the same class as Simone de Beauvoir. The two of them, apocryphally, achieved the highest marks for the certificate in Philosophy and Logic. De Beauvoir came in second. Finishing there, she went on to teach philosophy for high school girls. Alongside her vocation, she participated actively in Marxist politics of the day, and her writing in trade union papers received wide circulation. Not only did she participate in the Spanish Civil War, but she also boldly confronted many of her politically powerful contemporaries. Before dying of tuberculosis, she had won several sparring partners, such as Trotsky and Gorkin, but also several committed friends, among them, Camus. 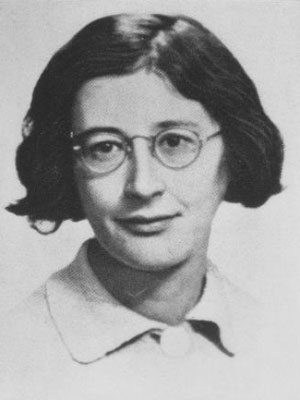 Weil’s 1943 essay On the Abolition of All Political Parties is short and provocative. The New York Review of Books Classics has republished it in a slim volume that includes Milosz’ essay and a second essay by Simon Leys, the translator, on the friendship of Milosz, Weil and Camus. In Weil’s central essay, barely over 30 pages, she briskly paces through an argument against the existence of political parties. Political parties pretend to serve some greater good yet they can only seek the good for their own members rather than the collective good. The noise of political competition excuses the existence of parties that never exactly detail the stakes, their positions, nor how any given decision would affect the common good. Furthermore, political parties quash the conscience of any individual participant. One wills themselves a member before fully understanding the party’s positions, an impossibly vague task. After joining, the party’s single-minded pursuit of power makes conscientious and attentive thought impossible. Nothing is easier, Weil asserts, than to provoke minds to quickly agree or disagree. Much more strenuous is the command “Meditate on this text, and then express the ideas that come to your mind.”

Simone Weil’s critique of political parties isn’t an argument against democracy. Her short historical account of the development of political parties in Europe is pessimistic: She calls political parties a sort of “artificial crystallization” that are “an inheritance from the Terror;” in answer to her own rhetorical question on whether they do any good, she concludes: No, and follows up with an even more damning rhetorical question: “Are they not pure, or nearly pure evil?” Yet she highly values democracy for the central place it holds, even if often nominally, for subjective conscience. The challenge for post-1789 democracies is how to bring citizens together around shared truths in an honest way, yet one that doesn’t collapse under the weight of its own pluralist ideals. For Weil, one of the most hopeful solutions is the world of letters, the loose and porous communities that come together over print publication—sometimes only brief associations, sometimes deeply enduring ones. Despite its strong polemic aims—“The Abolition of All Political Parties,”—the reader’s reaction to this print publication might be rather modest: Few readers today earnestly affiliate with political parties, and would be more apt to have casually agreed with her title before even opening the book.

But its powerful intervention might reside less in the discussion of the party system, and more in the metaphysical implications of her argument. Weil’s book participates in an ongoing contemporary discourse on the relationship between politics and religion. The early 21st century has revived early 20th century debates on Political Theology, the premise that politics is theology, might even be religion by other means. Weil most directly puts this forward in her historical account of totalitarianism before 1789. She writes of the pre-rational fealty that the Catholic Church at one time demanded: faith first, then reason. Only the difference for Weil, herself a complicated Catholic convert, is that the church puts forward stronger claims to knowing the truth. For one, the church dares to make those claims, which political parties have not the courage to explicitly do. By contrast, her prose makes direct and concise claims: “There is only one answer. Truth is all the thoughts that surge in the mind of a thinking creature whose unique, total, exclusive desire is for the truth.” Therefore notice, in this essay at least, that when she turns to the idea of truth, she is also bringing into her argument a subtle element of the theological, a desire for larger assertions of value that resonate with an attentively cultivated inner light.

Czeslaw Milosz observes, in the first of the two essays that append this volume, that for Weil, attentiveness is another way to pray. In this light, Weil’s project in this volume is a re-sacralization of Western politics. On its own, the essay might not appear that way. Her prose is sparing and brusque and she glosses over history with an expedient, and at times uncomfortable swiftness. But insofar as this little volume represents one instance of the print communities that she so valorizes, the posthumous collaboration among Weil, Milosz, Camus and Leys reinvests this essay with a prayerful attitude. In accord with her Catholicism, the experience of reading this book is a little like communion with the saints, no less nourishing and needful than the quiet moments at the breakfast table, after coffee, merely meditating.