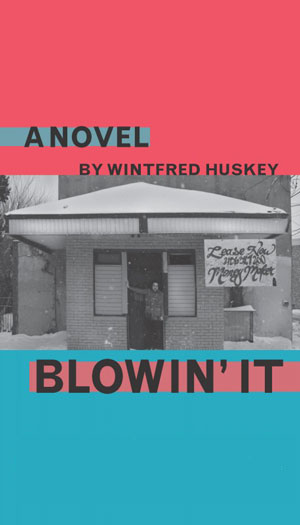 BLOWIN’ IT
by Wintfred Huskey
The Head & The Hand Press, 355 pages

Although the motif of the try-hard hipster wore thin over a decade ago, it’s still being trotted out in popular films, cartoons, articles, and so forth. The accusation of hipster-ness, which is distinct from being “hip,” at least where I live, is a serious one.

Hipsters are characterized by a blissful ignorance that borders on denial. (Peter Pan was probably the original hipster.) A hipster appropriates the costumes of other characters and blends them, creating a deliberate pastiche of playful yet ironic cultural references.

A hipster wears workingman’s boots and has hands softer than a lady’s kid gloves. The odds are good that he (or she) holds a white-collar job or the creative equivalent; the coffee shop is their daytime hub, and at night they hover around lumberjack-themed bars, drinking cheap American draft beers and talking loudly about other people’s art.

They are cultural locusts, wandering in an aimless cloud, wondering what on earth they will now do with their shiny new college degrees and Tumblr blogs and secret proclivity for trashy pop music.

This is the subject of Wintfred Huskey’s wicked debut novel Blowin’ It, which was released by The Head & The Hand Press in September 2014. Reading it, I experienced the itchy feeling that I’ve come to associate with accurate, truthful fiction. 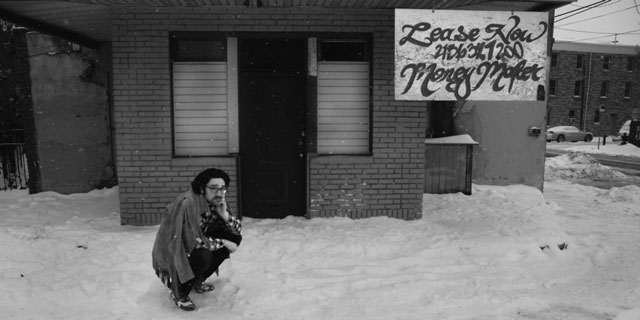 “I know people like this,” I thought to myself. This idea quickly transmuted to, “I am friends with people like this,” and then, to my great discomfort, “I am like this.” From the first chapter, my teeth were on edge with the simultaneous pleasure and revulsion of self-identification, starting with the special bike helmet worn by Duane Richardson:

His helmet was special too—if you were in on the joke. It was a gold punter’s helmet. Like the one worn by Jack Nicholson’s character in Easy Rider. It had taken an entire evening of online research to find one like it because nobody seemed to be manufacturing the old-time helmets (certainly not for the purposes of cranial safety). Perhaps you thought that was the kind of thing thrift stores always had, but they didn’t… So much work went into that homage and he smiled and admired himself every time he wore it.

Duane isn’t long for this world, and Blowin’ It follows an unlikely rabbit trail to the novel’s hero, Billy George, a dude with two names and no purpose in life. He’s stuck at a dead-end nonprofit, living in a cruddy loft with about five other people, smoking too much weed, and performing the horrible end-of-the-month calculations of the chronically broke young person. Of course he has a college degree, and of course he has no native intelligence.

If Blowin’ It stopped there, it would be a cruel farce. However, it is not, and to my delight and surprise, Billy embarks on an ill-advised road trip that weathers him from a feckless man-child to something approaching a full-formed individual. There are no deep lessons here, thankfully, just a good solid plot and a character that can take a beating—and take it he does, as he conveys a load of contraband and stolen museum art across the Southwest, losing one thing after another until, “Ultimately, the only thing to do was to sink down Florida like a smooth stone skipped into the sea and enjoy the motion of it all.”

So squirm, and enjoy it. Huskey’s written a perfect mirror, a coming of age story for the people we are—and the people we think we’re not.