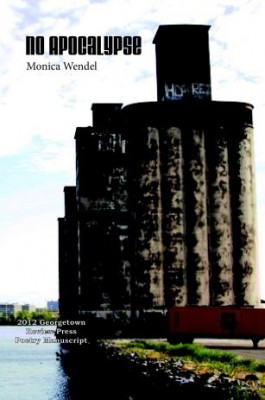 Monica Wendel makes every pretense of proving the veracity of her title, No Apocalypse, in her debut collection: as if responding to the question “What are some topics of poetry?” the poet has organized her work in orderly divisions—Politics, Dreams, Animals and Cities, Money and Ghosts—lending an everything-under-control sensibility to the book on the surface level. Indeed, her treatment of what many would consider signs of apocalyptic societal devolution – Wikileaks, the Trayvon Martin case, etc – is surprisingly deadpan, as if, in declarative ending lines, Wendel is grimly calming a gloom-and-doom hysteric. As such, when trauma does make an entry, it is all the more traumatic for its surprise, as in the poem “September, Red Hook”; at first glance the poem is whimsical, a charming exchange between two children as they float a piece of stale bread downriver (“a raft for a mouse who’s getting tired of swimming”), and by the time the reader realizes that the poem is set in the aftermath of 9/11 (“‘Or maybe,’ I said, ‘it’s a landing raft for someone in the ashes who jumped’”), it is the final stanza and there’s no backing out. It’s a technique that surfaces frequently in the book, all a part of Wendel’s strategic façade of non-apocalypse. 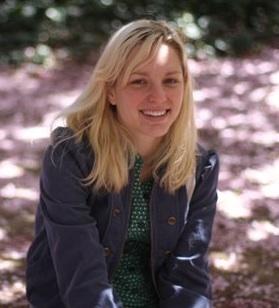 But as the book progresses, apocalyptic breakdown becomes all too apparent: political references pop up in “Dreams,” surreal reality invades dreamspace; titles, suddenly, are utterly mismatched with the contents of their poems. Where current events may lack a quality of disaster, Wendel’s personal details compensate; glimpses of Wendel’s private life are, for the most part, surprisingly compelling, articulating the self-centered but relatable way each of us prioritizes and synthesizes the components of an unsettled world. It seems, at times, that Wendel considers aspects of her personal life as cause for (or complement to) real-world disaster, e.g., “Of course, I fell back asleep and in the afternoon / high winds knocked a billboard off the expressway”, or “I was up // to my forearms in dark blood before I woke up / and also, Kyle Brown dumped me”. Strangely, such juxtaposition tends to draw the reader closer, for as hesitant as we may be to admit it, we can relate to Wendel’s paranoia. We may not know Megan, or Leela “with her backpack full of drugs and her shirt unbuttoned”, or Dave Solidarity and his bike accident, but we understand being “nostalgic for that / makeshift family”, just as we know the very real fear of a dream about your brother in the hospital, more catastrophic and immediate than the distant news reports one would expect with apocalypse.

Wendel is a master of subverting context to lend new insight, an appropriate approach for an author that hints (albeit satirically) at the “beginning of a new world order”. In poems like “Library” and “An Aquarium,” for instance, innocent titles mask forbidden sex acts, yet the creativity of Wendel’s metaphors makes said acts not so much crude as strangely reflective, intellectual. Lines such as “arcing like a mouth through / the sky – which is now turning purple, / Batman-movie purple” are unexpected, pasted alongside “an anarchist / boy with his black hood up and black bandana over / his mouth”; one feels almost guilty at chuckling in the face of violence.  It is here, more so than in Wendel’s direct references to revolution and new world orders, that the reader senses the possibility of hysteria, of disaster, as the poet’s cavalier treatment of trauma stutters and breaks.

Wendel’s morbid fascinations, strung as garlands of animal bodies and murder victims throughout, do, however, put the popular appeal of the book at risk, and would no doubt make for a depressing (not to mention predictable) body of work were it not for the poet’s suggestions that they, too, are not wholly breakdown-proof. Humor finds its way in with poems like “Sexual Assault Awareness Week,” in which Wendel suggests that men be given whistles to blow when they feel they might be about to rape someone. Hers is a dark humor, to be sure, but at least Wendel embraces her less-than-pleasant inclinations. “I know / I’m supposed to love rivers, but I don’t,” she writes, “I only love / great open expanses that throw up carcasses before us / as offerings or sacrifices”. With such admissions, the poet endears herself to us: we are also, secretly, attracted to suffering, violence, the imperfections of the human race. In rejecting the pastoral rivers of classical poetry, Wendel contradicts her neat subdivisions, and this – unlike, perhaps, zombie apocalypse movies or end-of-days premonitions – holds one’s attention.