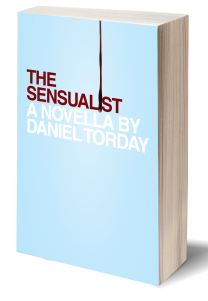 I’ve been thinking a lot about how I am at once very connected to and disconnected from Germany, and I’ve been exploring this feeling in a novel I’m working on. My grandparents were German Jewish refugees, sailing from Hamburg, Germany, to Ellis Island in 1934. We talked very little, my grandparents and their grandchildren, about their lives in Germany before they left. If their lives were an apartment building, it was as though we always entered on the third floor, and were welcome to walk around anywhere from the third floor and up but never below. We didn’t notice anything unusual. Obviously, there are good reasons for not talking about what was left behind by German Jews who escaped the holocaust. But there is also tremendous loss in disowning all of it. Sam Gerson, the narrator of Daniel Torday’s novella The Sensualist, has a similar relationship to his grandfather and his past. His grandfather rarely talks about his background as a Jewish Hungarian refugee, and Sam has not been especially curious. But Torday gets across the surprising strength and importance of the experience of the past generation—as invisible as this experience may seem—to Sam. Sam’s story really resonated for me.

The Sensualist tells the story of Sam and his friendship with a recent Russian Jewish immigrant, Dmitri Abramovitch Zilber. The two bond after being mistreated by a gym teacher. Sam becomes smitten with Dmitri’s sister. There are a number of fights with another boy, Jeremy, who also involves himself with the sister. We know from the novel’s opening sentence that it’s not going to end well for Jeremy. We know that somehow he’s going to get beaten up badly by Dmitri and his friends. To Torday’s credit, there’s a lot of suspense in anticipating this attack. I found it interesting that the attack takes place offstage—we learn about it through Dmitri’s recounting for Sam over the telephone what happened. There are many violent skirmishes throughout the book, but this last leaves Jeremy with a broken jaw wired shut and other serious injuries. Throughout his friendship with Sam, Dmitri insists on the importance of being able to feel and act on his emotions, like a Dostoyevsky character. This insistence is part of what lands him in juvenile detention, but it is also what attracts Sam to Dmitri. There’s violence, but there’s also sharing the story of what happened with a person who will understand. In The Sensualist, Torday makes a case for both conflict and connection being necessary for feeling alive.

Sam and Dmitri’s friendship changes Sam. It changes the way he sees his grandfather, and the way he sees himself. When Sam drives his grandfather to the train after a family Seder, Sam’s grandfather remarks on the big walls being built along the highway. Sam says they are “bullshit soundproofing.” Sam has noticed that these sound barriers are going up in the sections of highway behind the homes of the wealthy. Years later, Sam returns to visit Dmitri. Their lives have diverged. Sam is a college student in Maine; Dmitri has just been released from juvenile detention. Sam notices that Dmitri’s basement is quieter than he remembered it. Driving along the Beltway, he sees that the sound barriers are now everywhere. The feeling I was left with at the end of Torday’s spare, lyrical novella was that the Russian Jewish immigrants may well be on their way to becoming as assimilated as Sam and his family, but it was the noise that came with Dmitri and his friends that helped Sam better understand his grandfather and himself.