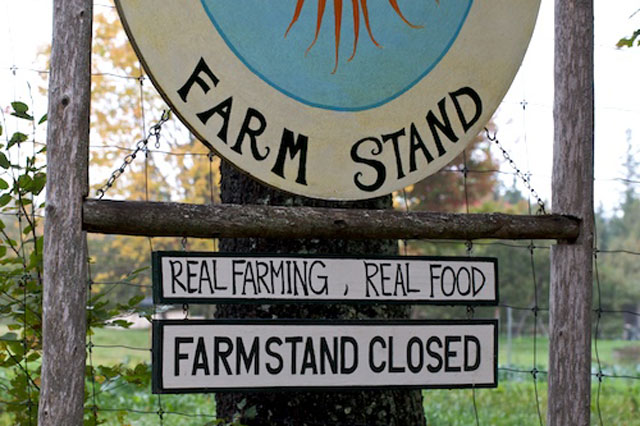 When I first started farming I thought I’d eat well, but the truth is no one eats worse than a young farmer. After a full day of pulling weeds, the last thing you want to see is another fresh vegetable. My friend Rob ate what he called “The Special,” and that was his everyday sandwich: two pieces of bread, one on top of the other. His “Special with Cheese” was two pieces of bread with a slice of cheese in between. “The Toasted Special” was two pieces of toast. Alex ate Fluffernutters all day long, and his hands were even dirtier than ours because of the sticking power of the marshmallow on his fingers. Greg ate better than any of us, but only because his girlfriend moved in with him, and she had nothing to do but cook. The smells coming out of their cabin were tempting, and it got to the point where we’d all find ways to avoid his house, even if it meant going the wrong way round the farm.

One Sunday in June, we took the delivery van into town to go shopping. We had all the vegetables we could ever want, but no meat. Greg stood for a long time in the grocery, poking steaks in the ice tray before picking the fattest, highest hanger steak he could find. I carried it on my lap the whole way back. At the farm, he plugged a hot plate into the outlet in the greenhouse, and we sat on upturned buckets by the tomatoes. We watched his cast-iron get hot, and when he threw the steak in, it flopped and seized up. We ate that steak with our fingers—Alex too, though his pieces got black with dirt—and didn’t talk much. Even the mosquitoes didn’t seem too bad that night.

On the day we slaughtered the pigs, I saw Matt again for the first time in four years. We had worked together in Rome, though he was from Alabama, I was from New York, and the pigs were in Maine. He’d been farming since I last saw him, and the sun had bleached his hair and browned his skin. His deep dimples were exactly how I’d remembered them. Our friend Greg shot the pigs behind the ear with the neighbor’s rifle, but one didn’t die easily, and Matt had to come running down the hill to tackle the screaming pig. In the barn, Lizzy was scraping the hair off the first kill and she thought the noise was Matt yelling, it sounded so human.

I sliced a pork chop from one of the pigs, and fried it in a cast-iron with cream and mustard. I took a fatty square of meat and fed it to Lizzy while she stirred salt into the bucket of blood to stop the clotting. She made blood sausage for dinner, and before she cooked it I dipped my finger into the blood to test the seasoning. I wasn’t sure what it would taste like, but of course it was just like when you lick a cut.

During dinner, Matt spotted a cockroach by the door and I jumped up to kill it. I slapped it with my bare hand and remembered Lizzy telling me that cockroaches live forever. They have nine lives, she’d said. Then what? I asked. Well, then they start over again at one, she said. Which is forever, she added, but it has an order. 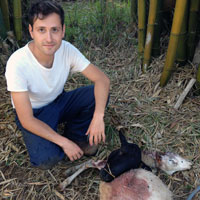 Peter Beck is a food writer and history teacher in western Massachusetts. He has farmed in Maine, Connecticut, Virginia, and Hawaii.