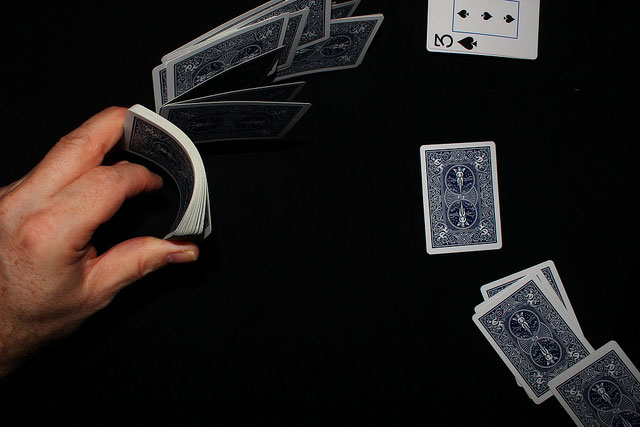 He presses the deck of cards into her hands and says: Shuffle. As you shuffle, think about all the cards in the deck. Concentrate on a single card, but don’t choose one, just hand the deck back to me when you have the image clear in your mind.

She does as he says. Her mind settles on the three of spades. She returns the deck to him. He takes it in one flat, outstretched palm and rests his other hand over the top card. He concentrates for a moment, eyes closed, then fans all the cards and, without hesitation, chooses one at random. He holds up the card. It is the three of spades. Is this the one, he asks. She nods, but it is clear she’s not impressed.

Nice trick, she says, but I can do better.

Prove it, he says. She smiles.

She leans forward a little and reaches out with one small hand. Her delicate, tapered fingers reach into his ear and pull out not a coin, but a hyena, which they hold by the scruff of the neck. She tickles it under its chin and sets it on the table between them. The hyena turns, knocking over their beer bottles. It leaps into the air and bursts through the window. It launches itself into the sky, where it eats three stars in the Big Dipper. Orion looses an arrow at the hyena and hits. The hyena explodes; a rainbow of confetti falls lazily toward the earth.

He turns his eyes from the sky and stares at her in wonder. That, he says, is a magic trick. He looks sheepishly at his deck of cards.

Cold night air streams through the broken window. In the sky, the constellations are scavenging for stardust to replace the three stars missing from the Big Dipper. Somewhere in Africa, a hyena wonders where its mother has gone. 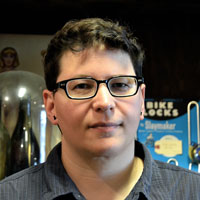 Circus is a jack of many trades. When he is not writing fiction, he works as a bartender, bookbinder, and adjunct college lecturer. He has a doctorate in geography and is currently living in Kingston, NY with his partner and a small menagerie of pets. An inveterate agitator for guerrilla art, he regularly reads his work at open mic events.