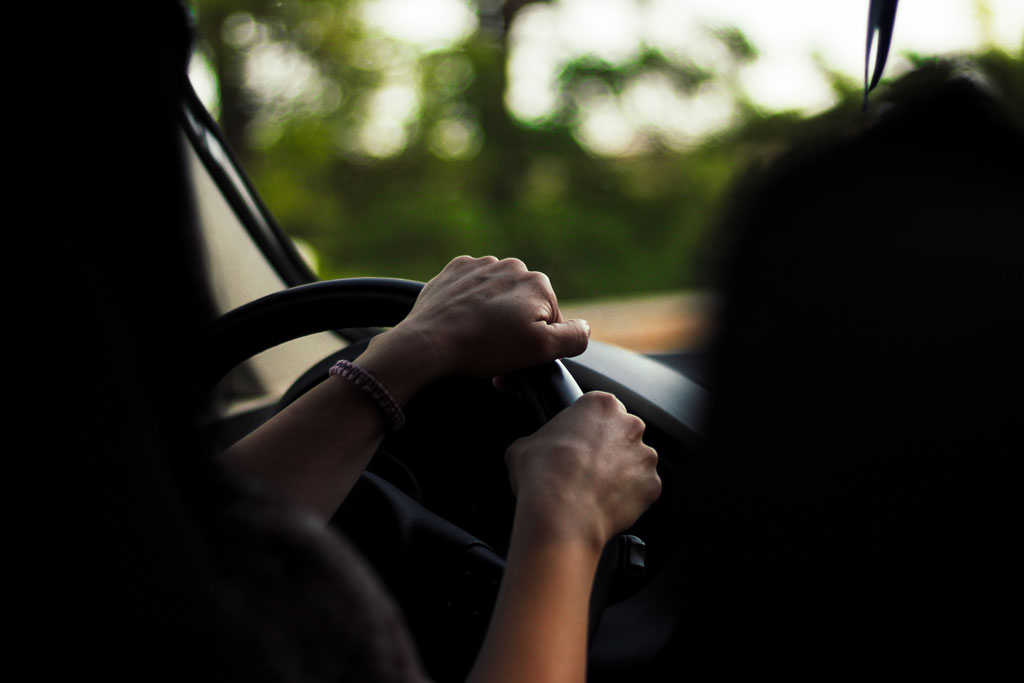 No. 1
In rural upstate New York, kids start driving young. Fourteen- and fifteen-year-olds are driving tractors between fields before they start high school. A few years later, their trucks are flying into parking lots with friends piled in their truck beds, searing black streaks of tire rubber onto the asphalt.

Long car rides have become the space that strings my life together, like the acclimation chamber before scuba divers plunge into the deep—a trip to the grocery store is ten minutes, the mall forty-five. In the village where I live, there aren’t many stores: a farming equipment warehouse, a tiny, undersupplied liquor store, a “general store” that as far as I can tell now sells mostly used DVDs. If you want to go anywhere else, you have to drive.

No. 2
We didn’t have driver’s ed, but we did have agriculture class. Every week, my ag teacher, Mrs. Schwartz, would take the seventh grade class into the field behind the faculty parking lot and teach us how to drive the school’s tractor. It was stick shift, and she would lean over to make sure you were in the right gear, her breath close and hot on your earlobe. The rest of the class stood to the side and watched as you attempted to navigate around the shrubbery.

I hated Mrs. Schwartz. She made me stay after class for what she called “remedial woodshop” and would stand a few feet away from me, telling me to move my fingers closer to the saw blade as she ate cold Velveeta off a spoon. When she taught the others to drive, I hid behind a tree and never learned.

No. 3
My father whipped the Subaru around a sharp curve, sending a throw pillow and half a box of markers careening into my lap. My brother proffered the container so I could scoop them back in. I was diving for a stray pen that had rolled under the passenger seat—blueberry scented—when my mother began. “Something happened while you were at camp,” she said, taking a deep breath.

I looked up from the chase at her tone. My father, at the wheel, was impassive as he accelerated onto the highway. Three suitcases and a laundry bag shifted uneasily as he rode the bumper of the blue Prius in front of us. We were close enough to read the sticker in the window that said “Coexist.” Despite his resemblance to an aging university president, my father has always driven like an extra in a rap video. It was worse on the drive home from summer camp, when three weeks’ worth of hastily packed luggage lurched in the trunk every time we rounded a corner.

My mother turned slightly, her seatbelt locking her in so she could only half face us. “Your grandfather is dead.” Next to me, my brother looked sucker-punched, but I was already staring out the window, counting telephone poles to hold back tears.

No. 4
“You need to pull forward farther when you’re making a left turn.” My mother, frowning, watches critically as I pull into the intersection. The rhythmic clicking of the directional mixes strangely with the beat of the country song on the radio. The song disintegrates into static as we drive out of town boundaries. “No, farther.”

“Mom!” My voice is too loud, my palms sweaty on the steering wheel. “I know what I’m doing, okay? Just relax.”

She clutches her handbag to her chest, her heels pumping an imaginary brake every few seconds as we inch forward. We have been driving together, a couple of hours every week, for months now. Her feet keep moving, but the black cavern under the passenger seat leaves her helpless.

No. 5
When I was little, my mother told me stories about her first car. It was powder blue, and used. She got it on her sixteenth birthday. The next winter, she skidded on ice and rolled it into a snow bank. My grandfather could never get the dent out of the roof.

No. 6
Freshman and sophomore years of high school, my brother drove me to school every morning. My parents had given him a hand-me-down Saab convertible, which looked cool in the student parking lot because it was black and had a soft top. The car barely ran.

When I was five or six, my father used to take us for drives in the Saab on cool weekend evenings. My brother and I huddled in the back seat, a blanket slung over us to block the freezing wind, and watched the trees and fences and gas station signs rush by faster than was strictly legal. At night, the moon moved with the car as if tied to the bumper with string.

Now, the steering column had some kind of leaking problem and my brother could barely keep from burning out on hills. We got so many tardy slips that our parents got a letter home.

No. 7
At the funeral, my mother read a poem about workmen and told stories about how my grandfather used to fix cars. She was asked to speak because she was the least likely of her sisters to cry.

It was hard to imagine my grandfather as a workman. His spindly, shaking arms couldn’t hold the weight of a toolbox; his rheumy eyes couldn’t adjust to the black underside of a car. The endless loop of chemo and remission had gone on for ten years. To me, his youngest grandchild, he’d always been made of medicinal smells and oxygen hiss.

On the drive home, tears leaked silently out of the corners of my eyes. Through the windshield, the green mountains of my mother’s childhood rose in the distance, pricked with pine trees.

No. 8
In the passenger seat, the proctor is printing off some kind of receipt. It looks long, which means the list of my mistakes is longer than it should be. He looks over at me. My hands are shaking, and my dress is crumpled from the pressure of my legs clenching against the brake.

“So technically, I should fail you.” My breath comes out in a gasp. “But I’m going to knock off this point here, and you’re passing. Be careful, and work on your parallel parking, alright?”

He hands me the receipt that will serve as my license until the new one comes in the mail. I take it, and as I step out of the car I watch as it is flecked with raindrops. My mother is waiting for me on the sidewalk. The license in my hand is suddenly useless: the moment I earned it, I was no longer covered under my mother’s insurance. She must drive me home.

As the car bleeds onto the highway, windshield wipers furiously beating away raindrops, my mother looks perfectly at ease. I’m hemmed into the passenger seat once again, and her feet have power over the pedals. One last time, she pulls forward into the intersection, farther, farther, and executes a perfect left turn onto the road home. 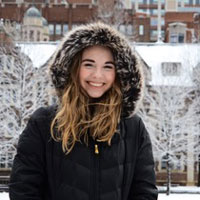 Charlotte Bausch is a sophomore at the University of Pennsylvania, studying English with minors in French and art history. She grew up half in New York, half in New Jersey, with a brief but alarmingly cheese hat–filled stint in Wisconsin. She currently lives with her two best friends in a tiny, yellow apartment in Philadelphia. “Driving Lessons” is her first published piece.