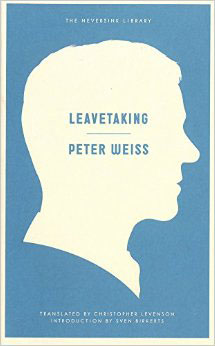 The late years of adolescence are the torch on the sugar of the artist’s will to create. Forgive the metaphor; I won’t extend it. But as I was reading Peter Weiss’ novella-slash-memoir Leavetaking, I couldn’t help but think of my father, cracking into a crème brûlée with the backside of a spoon. I do not recall the restaurant, the rest of the meal, or the occasion, but I can remember clearly the strong, decided crack of the spoon against the caramelized crust and my father’s white shirt cuffs and the satisfied look on his face as the dessert shattered, fragments piercing like shrapnel the smooth, sweet cream. My father has always done things with precision; I know him as someone who deliberates, and is a model of patience although he does not enjoy waiting. When he left home, it was time. We knew our exits just as we acknowledged the brief silence between courses, the arrival of a new dish on its small, white plate.

Leavetaking is about the last, painful years prior to a young artist’s decisive break from his family home. Peter longs to break through the thick, sweet layer of amber glass his parents have built around him. Mother and father, once gods, have dwindled into petty beings, “full of sympathy and compassion. They had given us all that they had to give, they had given us food and clothing and a civilized home, they had given us their security and their orderliness and they could not understand why we did not thank them for it.” A gentrified Jew raised in middle-class comfort in Berlin between the two World Wars, young Peter aches for something bizarre and avant-garde. He makes paintings that are totally abstract and express a world he can only touch with his feelings. At 17 he is cramped in his nicely tailored suit. His parents do not understand his drive to create; the tension between then rises as it becomes increasingly apparent that Peter will never be able to conform. They have unwittingly raised a freak—an artist—a black sheep. Around them, Germany is starting to break apart; soon, they’ll be surrounded by broken glass, a shattered world. 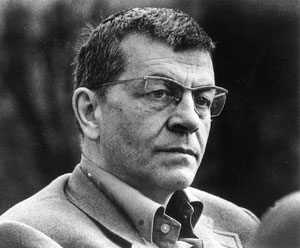 Peter Weiss is best known in America for his play Marat/Sade. He is recognized as one of the twentieth century’s great artistic polymaths, unrestricted by form or genre. Leavetaking emphasizes his sensitivity to color, light, and composition. Each scene is beautifully arranged, with nods to Virginia Woolf and James Joyce, as time descends like a drip of cold honey.

I stood in the first-floor vestibule looking first through one of the red, then through one of the blue panes of the glass door into the garden, so making the bushes, the pear tree, the gravel path, the lawn, and the summer house appear first in a fiery glow and then in subdued, submarine tones. At the time of this viewing my basic nature had already been formed, and only when the observing, controlling part of me wearies and my consciousness loses its hold do impulses arise in me out of my earliest life, and it is in half sleep, in dreams, in periods of depression that I re-experience the helplessness, the feeling of having been handed over and the blind rebellion of the time when strange hands tamed, kneaded, and did violence to my being.

That’s two Proustian sentences, and again I hear my father’s voice, asking if we’re meant to get lost in all this, and why does it matter? I suppose that the point is to dabble, as the narrator dabbles in his identity.

There are no paragraphs here, and the sentences are a raveling thread, connecting memories into a single seamless story. Peter’s successes are small, almost petty, but hard-won. The tiny, shabby apartment; the gallery show that nobody attends; a letter from Herman Hesse, his hero; tiny bites of independence. Meanwhile, things are worse for Jews in Germany in these decades. The changes motivate Peter to look beyond himself, through the tall doors of his parents’ house, and see “the vision of these steps that had led me from my birth onward to this place … I saw the dark pattern of their track.”

From childhood to an unsteady few steps into adulthood, Leavetaking is a beautiful, carefully crafted novella that perfectly captures both the sickening anxiety of being a child, as well as its joys and sunny afternoons. For such a daring artist, Weiss’ story is surprisingly conventional at its core. We wish for escape, always; and when it comes, we’re eager to breathe a new wing under Peter’s wings, as “the forces of my flying forward screamed and sang in incantatory chorus. I was on my way to look for a life of my own.”