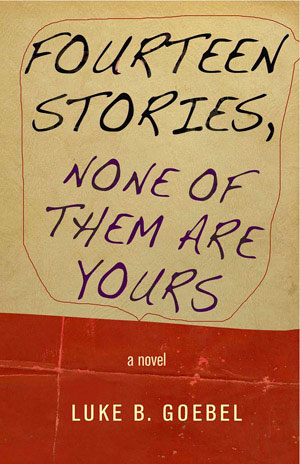 FOURTEEN STORIES, NONE OF THEM ARE YOURS
by Luke B. Goebel
FC2, 167 pages

The pleasure of reading Luke Goebel’s little big first novel, Fourteen Stories, None of Them Are Yours, comes less, it seems, from the pages themselves than from the palpable life-lust ripping past them, sloughing them off. The release of this energy is of course exactly a function of the novel form, yet the feat feels entirely new here, or newly realized. This monologue is running for its life, splitting the novel’s formal seams with intrusions to qualify retrospective distance or the shifting narrative present, the parentheses and brackets gaping wider and wider to reveal the fevered flesh beneath. In the narrator’s racing panic, we feel the pages tattering loose from his arms before finally snapping behind him with the wind into the crazy nothing. “Books are over,” the book concludes, and rarely indeed has a book been so humbled by the thing it contains. Life moves through these pages, and our joy—our elation—is seeing the pages struggle, and fail, to keep up.

I suppose each of Fourteen Stories’ chapters revolves around a particular story or anecdote, but in each the particulars get stirred loose in the turbulence and we’re left largely with the wind-shunt of its passing. But the situation more or less is this: Our narrator is undone by the death of an older brother, the loss of a girlfriend, humiliation by a mentor, and a peyote ceremony that, he says, “took me off the planet but I’m still on the planet.” The world is no longer a recognizable thing, nor is the self, so he acquires an RV, into whose aft all of this furniture goes sloshing:

Say I am a lost dog with my lost dog, only I am not a dog, and my dog is my dog, and I am a man upon the planet who is a family member of all families, but no one wants me, exactly, though I put on a great show of being an acceptable human. Plus my cock is far beyond average and I have a lot of firepower to give. Who wants to be human in these families, anyhow? I’m here. Baby. In California, I am saying, not in the RV Park you will read about in a few minutes. Ah scamp! 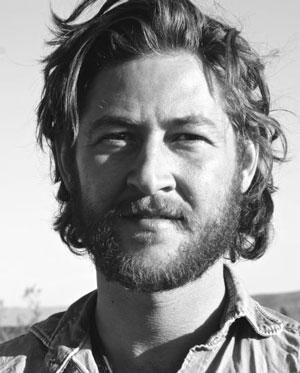 Beyond average his RV may be, but it’s out-measured still by his humiliations. The firepower here lies not in bluster but in the self-myth capable of carrying it off. Even as this myth is stomped at every turn—by death, break-ups, a literary father who has whipped him into a hot mess—its magical powers again and again restore him to a world that can fit his wanting, erecting around his losses and failures the Monument Valley of a hero’s passage; and while at times the narrator bends his vision to fit this world, via explicit fictionalizing, or what we hope is explicit fictionalizing, as in “Apache” and a few other cantors into windmill territory, at other times it’s the world that bends itself to fit the vision—as in the deliverance of an eagle feather, the article of faith that in a way sets the entire novel aloft.

We laugh at this dude’s earnest over-the-top bloody chest-baring—he seems to think in all-caps—yet we’re also moved by it, as we are by Quixote’s, because it’s too self-aware to be delusional. It feels, particularly in its duration, heroic in its faith—in its dogged belief in a largeness of self that, even as this belief is undercut and smashed by nearly every experience in a world whose job it is to make us feel smaller and smaller, persists nevertheless. The bluster’s buoyancy is an urgent one, but as a boat it’s a humble one, and in the end like everyone else’s:

Listen, listen, dammit, should you want to know the truth. I feel lousy as hell about chasing girls and talking the way I talk. You want to know the truth? As one man to whoever, I feel compelled, urged, to show off. Talking about roses and girls. These lunatic stories. Give me a break. What a joke. Pussy heaven. Ha. The world won’t want to hear this shit out of me, but the truth is I feel lousy. Those dogs howling in their kennels. The whole world aching to come back to life from the life we are all in up to up to our eyeballs. Everyone splintered over this and that word because they can’t change a light bulb in terms of getting a new joke together. I feel bad to God, when the truth is said, God’s honest truth: I want to be there for the world and for the people I love and for the people I don’t even love. All this talk about gishy is just, for me anyhow, just talk—unless I can find someone to spend some time with and then you know . . . make things better

Here is the howl of one of Rumi’s love dogs, whose sadness is itself the secret cup, whose whining is the ecstatic connection—a dog that none of us knows the name of but should give our life to be.

Fourteen Stories’ ecstatic narration could be mistaken at first as intoxication, soft spew—or, worse, some kind of arrested-adolescence pseudo-quirk lit. Yet Goebel’s is exactly the kind of talk that is not available to the dope-head, drunkard, or the scenester; there is too much charge in the non-sequiturs, too much gut desire in the engine room, and something clear-eyed and unblinking at the helm. Nor is Fourteen Stories, I think, meant to evince some kind of craziness or melodramatic imbalance—even if it does feel ghosted-through with the crazy soliloquies of Padgett Powell, Barry Hannah, and Harry Crews, whose racket-making imitators we hear all around us, revving and spinning, going nowhere. There is bluster and self-pity here, whooping and “half-fake tears,” but by being upfront about the bullshit of his own drama, the speaker manages at the same time to embody the drama, buying into it himself to the extent that the bullshit becomes real, because it was real, or is at least made so real in the telling that the feelings attached to it take on momentary validity and force. This sounds like method acting, but even that is too strategic a term for the way Goebel happens on the page:

The candles at the table, I used to stare at them and the light and feel myself going out of myself into the room like light itself. Like the candle was my name. I could feel the light in me, I am saying, going out of the room.

That is Denis Johnson and in no way derivative of Denis Johnson. And even as the correlation between Fourteen Stories and Jesus’ Son feels strong—particularly when we hit Goebel’s final chapter, “Chores,” which finds the narrator somewhat sobered of himself, a little tired of his antics and antic voice, and humbled to meeting the world on its own terms—even then the comparison feels meaningless, since originality has nothing to do with authenticity. This is an old story, finally, and the narrator arrives to the place all the old stories arrive. Like Candide after his journey, he is ready to tend his garden: “But it doesn’t matter now after my brother has died and I have to wash his truck and do some chores. Don’t kid yourself. I’m licking wounds—but still kicking.” Humiliations beget humility, and humility is the real firepower.

Goebel seems in Fourteen Stories to have broken this horse just enough to show us something of what real wildness is in fiction, which can’t stand the saddle of fiction, not for long. Everyone’s trying to speak their wild these days, and we tire of these honking voices, the evasive quirk, the lyrical feints, the mumble-mutter—the field’s crowded, enervating strain for originality. Yet we feel no such strain in Goebel’s work, in whose own strained attempt to actually make a book—one seemingly inscribed with fevered care on the back of a receipt on a sweaty knee while driving a motor-home at a mythical eighty-miles-an-hour across the desert with the windows open and sucking and snatching at anything loose and floating—we experience, in this panicked provisioning, the passing thrill of being a tiny human heart beating its way toward the immensity of the American landscape, knowing all the while that we will lose, have lost already, yet happy enough, bright and blue-eyed and ready for another beating.

We should give our life to be it.

Jacob White is the author of the story collection Being Dead in South Carolina (Leapfrog, 2013). His work has appeared or is forthcoming in Salt Hill, Shenandoah, Denver Quarterly, The Georgia Review, Hobart Online, and elsewhere. He currently teaches writing at Ithaca College in Ithaca, New York.