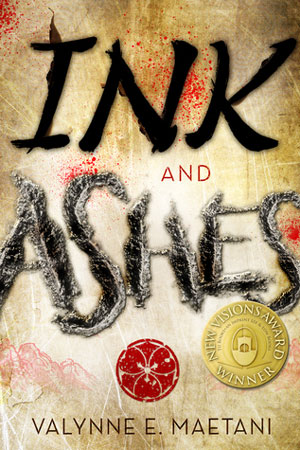 Valynne E. Maetani’s debut novel, Ink and Ashes, begins with the narrator Claire’s eerie statement: “I stared at my pink walls, wishing away the smell of death. I imagined the wispy smoke snaking its way through the narrow spaces around my closed door, the tendrils prying at tucked away memories.” This observation cements her voice as protagonist, a mixture of sensitivity, uncertainty, and fierceness. As the smell of incense wafts up to her room – part of a ritual to honor her father since his passing ten years ago – she struggles to reconcile memories of her father with what she later discovers about him. And it’s this powerful voice that leads us through a heart-pounding narrative journey, exploring the nebulous nature of memory and trauma.

At seventeen, Claire deals with the typical issues of a teenage girl: homework, relationships with boys, and overprotective parents. Still, her life is colored by the loss of her father. Looking back through his old journal, Claire discovers a mysterious letter from her father addressed to her stepdad George, whom she believed her father had never met before. Suddenly, the stable life she thought she knew is thrown into doubt. Claire must reconcile the memories and ideas of her father with a new and haunting legacy.

From the moment of her discovery, Claire embarks on a mission to learn more about her father’s past, his suspicious cause of death, and whether he was the upstanding man she believed him to be. Meanwhile, her locker is broken into at school and Claire’s anxiety rises as she notices a black SUV following her around. On top of these worries, Claire is forced to come to terms with her feelings for her best friend Forrest. He is always on hand to comfort and defend her, keeping Claire from retreating into herself when her thoughts get jumbled or anxiety takes over.

The overprotective group of boys around her – her two brothers, Forrest, and their friends Nicholas and Fed – are the foundation of the relationships in this story. They crowd around in her times of need, acting, as they call themselves, as the Axis Powers. Banding together even amongst the in-fighting that ensues between brothers and sisters, they are determined to keep each other well and safe. Drawn into Claire’s scheme to learn more about her father, they become equally determined to uncover the truth, whether they are ready for it or not.

As she becomes more and more embroiled in the mystery of her family’s past, Claire’s physical space and her strong narrative voice establish the mounting tension. We are hyper aware of the claustrophobia she feels when surrounded by all the men in her life. Each time a new detail of her father’s past is revealed, Maetani describes her breath. When Claire is almost killed by her mysterious pursuer in a car accident, the way she sees shadows and empty spaces reflects her fear and trauma. 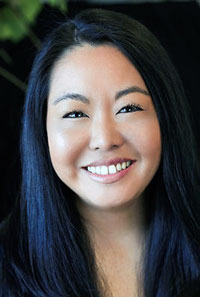 Claire is aware of her body and the space she occupies, always ensuring that space is protected. In the moments when her space is invaded or her safety threatened, Claire’s martial arts training kicks in, and she is ready and willing to defend herself and her loved ones. Even in the tender moments between Claire and Forrest, exploring one another’s bodies through expressions of love, the narrative is complicated by her mingled enjoyment and worry about their relationship; a refreshing look within a young adult genre that can sometimes depict female protagonists as up for anything.

The mystery evolves, guided by Claire’s point of view. Though there are details that hint at what might be coming, we receive information as Claire does, and so our view is just as limited, spurring the story on to unravel the mystery at the end. We watch the action unfold through the eyes of someone who practices Japanese customs in her family but who also feels largely disconnected from Japanese culture and language, further establishing that all Claire thinks she knows and understands is thrown into doubt. The deeper she digs, the more Claire questions what her father might have been capable of.

In an attempt to create a subtext for the action and give a new layer to Claire’s emotions growing up without a father, Maetani weaves letters from Claire to her dead father throughout parts of the narrative. Her one sided conversation reveals her burgeoning hopes and her insecurities, allowing us to feel her loss more acutely. However, as the action picks up towards the end of the book, the letters are not present, calling into question whether they were necessary at all. It is already clear through Claire’s point of view that her attempts to understand her father are also attempts to gain a better understanding of herself.

In her first novel, Maetani has created a well-drawn and empathetic character and a mystery that keeps us reading. Although the narrative drags a little in the beginning and some of the dialogue can sometimes feel forced or unnatural, once the story finds its stride, we’re hooked. The stakes are high for Claire and her family, and that feeling never dissipates. It is a book that asks the reader to reexamine our understanding of family loyalty and forgiveness. No matter how much we try to pack it away, the past will always have a bearing on the present. This is a novel that provokes laughs, quickens the pulse, and makes the reader feel deeply for its heroine. Maetani is definitely an author to watch for in the future.