“Let my heart tell you what prompted me to do wrong for no purpose, and why it was only mischief that made me do it.” Thus spoke Saint Augustine of Hippo, and with those words, invented the confessional memoir and spawned the talk show in which the recounting of misdeeds leads—it is hoped—to self-reflection, repentance and salvation. When you put the peccadillos in print, it is difficult to escape this literary paradigm, for, as with Augustine’s sins (and our own), the more you struggle, the more surely redemption will drag you toward a hopeful destiny, like the mighty Mississippi at flood tide, and you borne aloft on your own self-damning words.

Two such memoirs have just been issued from Rare Bird Books. The first, Punk Elegies, is the sometimes desultory, occasionally comical, and moderately self-aware account of Allan MacDonell’s drugged and drunken misbehavior as a skilled yet dubious reporter of punk music for Slash magazine in Los Angeles, present at what is dubbed the birth of stateside punk, via a band called The Screamers. He has given himself his toughest assignment ever in this memoir, because it’s all been done before: promiscuous sex, alcoholic stupors, watching friends overdose into comas. After sixteen centuries, the genre has grown a little tired. And what do you do when you weren’t really that close to the main action, nor played a prominent role? What if you were a journalistic hanger on, and not even of the sweetly naïve Almost Famous variety? What if you were an annoying lout?

Slyly, MacDonell turns these facts to his advantage. He neither preens nor tries to win us over too insistently. He accepts his insignificant place among the night crawlers, and acknowledges that his quintessential brush with fame is when a teenage Joan Jett, wearing a wife beater, shoulders him in the midst of an alcohol-fueled, bickering fight with three “heavyset girls who wear a lot of makeup.” Dispassionate as the Living Jesus, Joan takes a knife from Allan’s hand and dispenses this wisdom: “You’d be a pretty cool guy if you didn’t drink so much.” 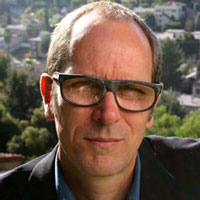 Midway through the memoir, we’re treated to a reflection worthy of Augustine: “Don’t think I haven’t noticed that this entire set of memories so far, with no indication of changing, recalls the author as unpleasant, grasping, an indulger, boorish and wishy-washy, selfish and afraid, a groundless snob, arrogant and without achievement, a self-suckered chump.”

The best moments of Punk Elegies are predicated on pure style, simple but effective. A memorable moment occurs in a hotel hallway, when a woman and a man are having a physical fight, with neither getting the final upper hand. This momentary tragedy is rendered as comedy.

With a sick, ripping sound, the woman’s hair tore loose from her skull and came away in her companion’s hands.

“He’s scalped her, Allan! Do something!”

The woman’s wig had come unhinged. For an instant, the man stood baffled, the tresses lax in his fist. Then he began whipping the girl with her wig.

And so it goes. Amid this slapstick, who can really get stuck in depravity?

Daddy stands as more soulful and sincere, entirely devoid of humor. Despite its accolades from Dave Navarro for “eroticism and intellect,” and a peppy, cheery introduction from Annie Sprinkle, this tell-all of initiation into sadomasochism begins in a less than promising manner, with amateurish writing (“the first blush of sunrise,” “my stomach knots and suddenly lurches,” “my heart begins to race”).

In the familiar frame of experience-forged adult looking backward at relative innocence, we are, like the abused heroine, in good hands, constantly reassured that we are following a feminist parable of girl power, in which “the BSDM community” is civic-minded, equipped with “safe words,” and better than Mitt Romney at staging conventions. Descriptions of sex sometimes sound as if culled from a reader’s forum (“his long, hard cock penetrated my wet cunt,” etc.). Most problematic of all, everything is over-explained, as the title implies, in pat Freudian terms, and I sometimes wish to run shrieking from the group therapy session. 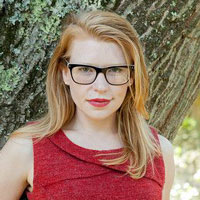 I pushed on, and like our happy slave, when she finally earns the prize of a leather dog collar with a lock on it, I was rewarded. Halfway through, as Madison Young casts off the need to represent her journey as a wholesome and uncomplicated progression to higher consciousness, she gets raw and the prose quality takes an upward jump: “I ran my fingers across the large, rusted chain collar that Daddy padlocked around my neck before placing me in my cage. It was heavy. Many collars could pass for stylish chokers and necklaces, like the ones you might buy at the jewelry store, but this collar was a symbol of humility. A huge chain that looked like it came from a mechanic’s garage.”

The ritual humiliations that follow, which Young compares to premarital counseling sessions for Catholic fiancés, carry the sting of fear and doubt, even as they carry the first-person protagonist toward carnal transcendence. The scenarios acted out don’t seem entirely in good fun. One of Daddy’s many educational reminders to his little girl reveals the cold center of the heart of sadomasochism, which teaches that the suffering of a non-entity is the path to higher consciousness: “This collar is just a vehicle, a prop. It will be used on others after you and you will give it up at the end of the week. Understood?”

After her inevitable victory over pain, so right for this genre, the story’s authenticity is sealed with her getting pregnant, worrying that their apartment complex has no laundry, and the other petty concerns of daily life for an expectant mother. Among the stretch limos and models, the extended descriptions of her pornographic acting under Daddy’s direction, the sometimes stilted and theatrical dialogue of women begging for degradation and humiliation, my favorite grotesque image of the book comes, not from the world of kinky sex, but from that of giving birth. It’s written in good, old-fashioned plain prose: “On March 2nd, at about 4:30 a.m., a blood tinged snot-like mucous plug dropped from the hole of my cervix into the toilet.”

She is now a mother.

In its lurching way, Daddy fulfills the requirements of a book of confessions, taking us from light to dark and back to light again. If the journey’s prose is sometimes tortuous as well as torturous, it should come as no surprise, for as every good Catholic knows, it isn’t always easy to get to Heaven.