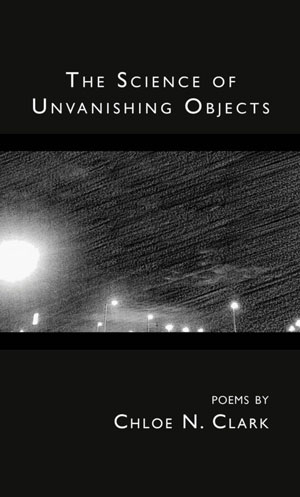 Completely mundane happenings take on significant meaning in Chloe N. Clark’s The Science of Unvanishing Objects. Everyday things like butterflies, telephones, and mirrors assume a role beyond their normal functions. Likewise, ordinary events such as conversations between strangers and seeing a lover naked for the first time become catalysts for a deeper understanding of the universe. Through her explorations, Clark repeatedly returns to loss, a major motif in this collection, which is amplified by recurring narratives centered on missing women.

The Science of Unvanishing Objects opens with a poem about a girl who has disappeared. Each line completes the title “Missing Girl Found—” as a newspaper article might break the news to its engrossed readership. In the first outcome, the girl in question is found simply “dead.” In another, she is found “to be the last goddamn straw to a woman who moves away because the town is turning, changing, becoming some place unrecognizable.” And in one more, the missing girl is found “to be missed.” These outcomes are visually presented on the page in a shape that resembles a deep well, or a rabbit hole—where the vanished go to become old news. This acerbic beginning sets the tone early and establishes a major theme for this chapbook: the weight of what’s gone.

With “The Detective, Years After,” Clark continues her exploration into the void left by women who are no longer with us; this time she focuses specifically on women who have been abducted and possibly murdered. The poem, as the title suggests, is told from the perspective of the investigator who had been tasked with finding them. The detective’s account opens:

Missing women often appear
to me in dreams, always asking

the same questions: why it was her
that I had found instead of them,
why she was the one brought home.

The detective is haunted by these unfound women. Guilt-ridden, he (assuming that this detective is male) doesn’t know how to tell their ghosts that he gave up, stopped looking for them. He says he’s sorry, but one cannot help but wonder if the detective abandoned certain searches because some lives are more valuable than others, as anyone who watches the news or reads true crime knows.

Clark’s book also adopts, at times, the point of view of those who long to vanish, who wish to be free of this treacherous plane. In her poem “The Double Dark Theory of Our Universe,” the narrator asserts that not everything is meant to be, that most events in life are “only coincidences.” Even one’s love life, perhaps especially one’s love life, is not as sacred as some may believe it to be. Clark’s narrator recollects the last time she saw the lover to whom this poem is directed: “you said in another life / we would be happy. And I said / in another life we would be // free from one another’s ghosts.” While she may not yearn for the end of her literal life, this speaker does wish to shuffle off the mortal coil that is lost love, which has consumed her as black holes will “swallow all the stars in their / path.”

A poem entitled “Missing Girls, Continued” concludes the chapbook. It tells the story of a girl whose best friend has disappeared. The narrator details her friend’s “emptied / out eyes” that reveal the inside of her head “all the way to the back / of her skull.” She wonders where her friend keeps her memories now that she no longer has eyes or a temporal lobe. She then recounts a moment from their childhood, in the form of a dream, wherein they looked up at the night sky. As the shooting stars soar, they “forget to make wishes, too busy / thinking of how the stars must have / names, we just don’t know how / to say them.” This calls to mind all the, largely nonwhite, missing girls whose names may be too difficult for evening news anchors to say, or for police officers to utter while investigating—cases that ultimately go cold and stay cold.

The poems of The Science of Unvanishing Objects are challenging yet approachable—a mix of verse and prose, expertly arranged on each page to evoke both visceral and cerebral reactions. On one level, Clark examines the bigger questions about our universe while on another level, oftentimes within the same poem, she shines a light on our problematic cultural landscape—specifically the treatment and representation of women by the media, by the justice system, and by the world at large.

Brandon Stanwyck studied film, literature, and theatre at Cleveland State University. While there, he led a student-run theatre company. He currently lives in Ohio, where he writes fiction and criticism. His work has appeared in Necessary Fiction, The Fiction Pool, and elsewhere. Twitter: @BrandonStanwyck.