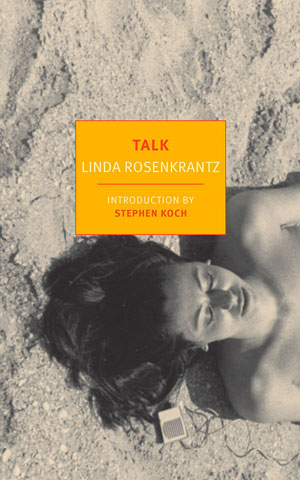 Whatever else it might be, Talk is the bearer of a remarkably terse and comprehensive title. Has there ever been a work that so accurately summarizes its contents in so short a space? In four letters, Linda Rosenkrantz encapsulated the interior of her 1968 literary experiment immaculately; this is a book of talk. All 215 pages are repositories of speech, unadorned by scenic description or third-person agency. What’s more, they’re pages of genuine talk, not a word of it imagined or fabricated. Over the summer of 1965, Rosenkrantz decided to capture the conversation of friends on tape, a process that eventually lead to her picking out three personalities, and presenting their interactions in the form of a “novel in dialogue.” Stephen Koch’s introduction fleshes out the context: “I had the tape recorder running all summer,” Rosenkrantz recalls,

even dragging the bulky monster to the beach. At first there were about twenty-five different characters and fifteen hundred pages of single-spaced transcript, which I took close to two years honing down to the three characters and two hundred fifty pages.

Quite the project, in other words. A little later in this same introduction, however, there’s another phrase that ultimately proves more striking. As Koch introduces the conceptual basis of the book, he posits that the guiding vision behind the work was one of exploring how daily existence might function when presented as an act of creation, thus acting as a literary experiment the results of which were hard to foresee. The framework, he offers, within which Talk should be viewed is crystallized into the following question: “Why not see if life really imitates art?”

This short inquiry resonates throughout the book and employing it as a lens through which to view the work is a useful way of thinking about both its accomplishments and its problems—two things that are entwined in an unsually involved way here. Starting with the obvious is a good way of beginning the disentanglement, and the most salient characteristic of the book is its presentation. Talk has, impressively, retained something of its essentially innovative core. The pages follow the dramatic format, punched with the names of speakers on the left hand side so that any reader picking up the book without foreknowledge of it would presume it to be a work for the stage. And yet, the lack of even theatrical instructions is conspicuous and adds to the sparse, stripped-down feel that emanates from the text. Rosenkrantz presents the three characters, Emily, Vincent, and Marsha, in mundane scenarios that range from sunbathing on the beach to preparing the evening’s meal, all the while exchanging thoughts and feelings with no authorial embellishment and in a way that is completely free of commentary from anywhere outside themselves. It’s quick, it’s insular, and it’s entirely unpredictable:

EMILY: What’s the matter, darling?
VINCENT: I’m so sad.
EMILY: Why?
VINCENT: Because that’s what being alive is.
EMILY: I know it, I’m sad all the fucking time, you have no idea.
VINCENT: I head something last week about what makes humans different from animals, some gorgeous basic thing, like that humans have memories, but it’s not that.
EMILY: What is it?
VINCENT: Something absolutely beautiful. Are you putting garlic powder in too? Wow, is that cheap. Why use fresh garlic then?
EMILY: Completely different tastes. They are, as one might say, complementary.
VINCENT: Marsha darling, I can’t bear it when you’re sad.
MARSHA: I’m not, I’ve just got a lot of work to do.
VINCENT: Who hasn’t? I began a new painting today.
MARSHA: Yes, and were you interrupted?
VINCENT: Yes, continually, by my memories. Do you want to get married, Emily?

The manner in which the diaologue flits around here, rapidly opening avenues of conversation before turning away from them just as swiftly, isn’t unusual for the work at all. There are no guarantees that subjects, once raised, will be followed past an initial line or two and there are occasions when these swift changes are downright brutal in their spontaneity. As a reader, it’s hard to remain neutral to this sort of thing and it’s this insistence on making us feel one thing or another that’s in rude health in Talk, even decades after its original publication.

This insistence turns out to be problematic for the book. After only a couple of chapters of such choppiness, and once their novelty has started to dim, the tangential interruptions very quickly begin to pall. Accumulating rapidly and falling more abruptly than they might in a more conventional work, they lack the descriptive preludes or explainations that would usually accompany them. Consequently, they very quickly become a regular reminder that the life in Talk is failing in its aforementioned attempt to imitate art. In effect, these interruptions are like chimes from a clock tower—we can sit beneath it for minutes at a time without paying attention to the fact that time is passing, but as soon as it sounds, we are reminded of the moments that have been lost. In a similar way, there are passages in Rosenkrantz’s book that come off as being at home in a literary work; they explore themes with patience, at length and with an interested, and interesting, tone. But because these sections are always eventually bombarded by this inattentive disturbance, the reader keeps being jolted from the rhythm of the conversation. Persisting begins to require a distractingly conscious engagement with what comes to feel like a clunking artificiality.

Which is curious, of course, because there’s nothing whatsoever in Talk that is artificial; this is bona fide conversation transcribed verbatim. So where does this fraudulent aura come from? Part of it is born of Rosenkrantz’s commitment to carrying through her project. She was so immaculately fastidious in her presentation of—and only of—her recorded exchanges that the result can feel ruthlessly clinical in its presentation of material that doesn’t always seem worth presenting in the first place. But that doesn’t quite get to the heart of the issue. To do so requires revisiting Koch’s initial question in order to effectively strike it from the record: Does life imitate art? No. Not here, at least. The part of life that is captured in Talk isn’t imitating anything and to seek its doing so is to miss the point: this isn’t artificial, but it is an artefact. What we’re doing when we read this book is eavesdropping on conversations that took place almost fifty years ago. The lack of an authorial presence leaves us free to interact, not with a novel or a literary creation of any other sort, but with a piece of history. This, primarily, is what the book amounts to—a chatty and irreverent slice of archived dialogue that illuminates the cultural atmosphere of the 1960s.

And, as such, it’s a fascinating document. The society in which Talk unfolds is one undergoing enormous changes; the pill has revolutionized the way sex is thought about and engaged in, the drug scene has expanded in an excitingly psychedelic direction, while the artistic milieu the protagonists are orbiting is a bustling source of gossip and parties. Emily, Vincent, and Marsha drop names from the worlds of literature and politics with a delicious regularity; the cultural zeitgeist in general is richly contextulaized in passages of the following sort:

EMILY: Let’s see, I love Fitzgerald—Gatsby is one of my favorite books, and Tender Is the Night; the Autobiography of Alice B. Toklas, The Sun Also Rises, the poem Kaddish. I love Proust, Chekhov, Ibsen, Strindberg, Durrell, Robert Creeley, I like Rilke, I like Martin Buber, the idea of I and Thou, even though I don’t know much about it. I like Bob Dylan and I love the Beatles. I like Frank Sinatra. I have a couple of favorite songs in the word, I think one of them is “Speak Low” by Kurt Weill.

Emily and friends insist on analyzing themselves and the people around them. Everyone is seeing a therapist and there’s a lot of time spent answering questions about the significance of this event or that dream, the tendency becoming almost laughable in its occasional degeneration into self-obsession:

These aspects of Talk jolt the reader; they force an awareness of the discrepancies—and similarities—between our own age and that of the book. Perhaps it’s most rewarding to think of Emily, Vincent, and Marsha as vessels for a time that has, by now, become a distant, storied, and almost mythological, completely beyond our reach. It’s the insight into this era, and the people who were living through it, that we should focus on here—much more than the stuttering way in which these same people might be contributing to a work of art.