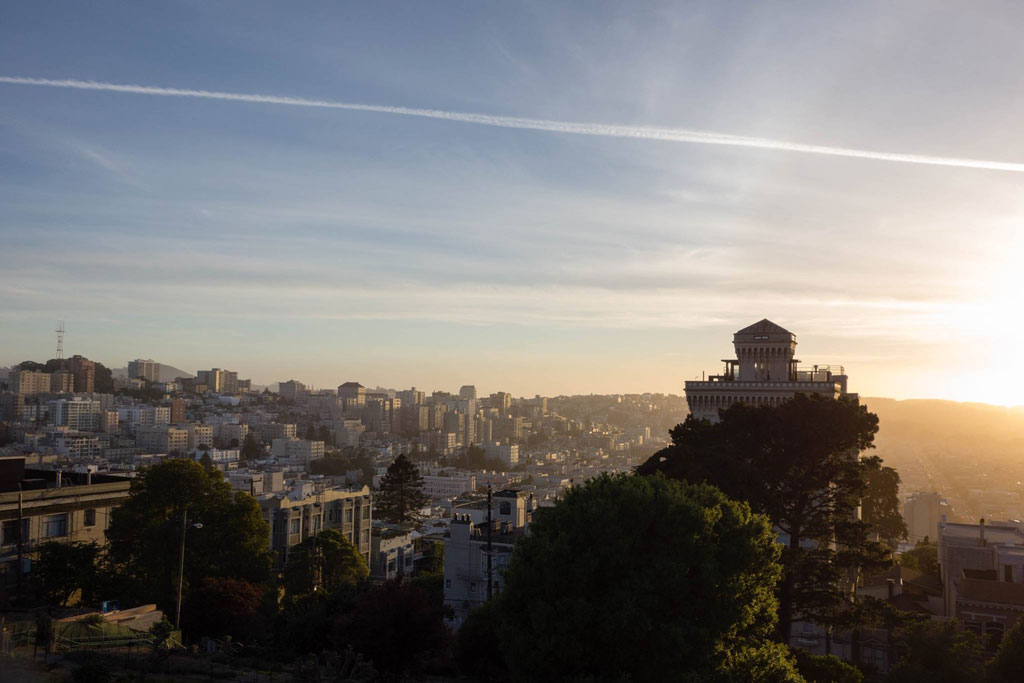 When people ask you about San Francisco, you always get stuck on the way you sense it. It starts with the smell. Wherever you lived before here, it didn’t smell quite like this. The pot is open, lingering around parks and sidewalks, not just your brother’s basement room. It’s hand rolled joints after work. It’s chocolate covered blueberries eaten at the movies. Pot in San Francisco is beer in Berlin: commonplace and open. If anything, pot knows this city better than anyone who lives here.

It’s not just what we consume that fills the air. You can’t forget what it means to be human. Pee runs down alleys. It sneaks up on you in odd places. Rushing to work, leaving a bar, even if it doesn’t faze you it surprises you every time. You try not to wonder if you’re breathing it in. You’re hoping it’s already dry and won’t seep into your shoes.

It’s not only pee that keeps you in closed toed shoes. Poop is less common but still too frequent on the streets. One man shat on Market Street during rush hour. When he saw you watching, he yelled, “I gotta go somewhere!” You weren’t angry at him; you couldn’t be.

It’s true: where can the homeless go? The stores won’t let them use their restrooms. There are public restrooms, but they aren’t always open. Are they any good? You haven’t had to use them. The sidewalks are always there, even when dignity falls apart.

So, you wear closed toe shoes. It doesn’t solve the homelessness or clean the streets. It just makes your commute a little easier. You feel guilty about that, the same guilt you feel when you give nothing to the women walking through BART trains. The problem is all around you, but you don’t know how to touch it without getting covered in someone else’s shit. You’re just trying to get to work.

It’s not just your nose dealing with new sensations here, but also your skin. You’re used to temperature ranges, but not a drop when you cross the street from sun into the shadow. It’s beautiful in the Mission, but at Golden Gate Park you struggle against the beach’s fog. Microclimates—the word reminds you of tapas, if each plate covered a different part of the city. Instead of holding onto the menu, you always bring a jacket, just in case. Your wardrobe shifts into layers that can rise and fall off your skin.

As far as cities go, it’s beautiful. First, there is so much sky once you leave SoMa. It seems impossibly blue and wide for thousands to walk under but it’s there when it’s not raining. Then, there’s the nostalgia of preserved Victorian row houses, and the cable cars on Market Street. Somehow, you also get miles and miles of city touching the sea. 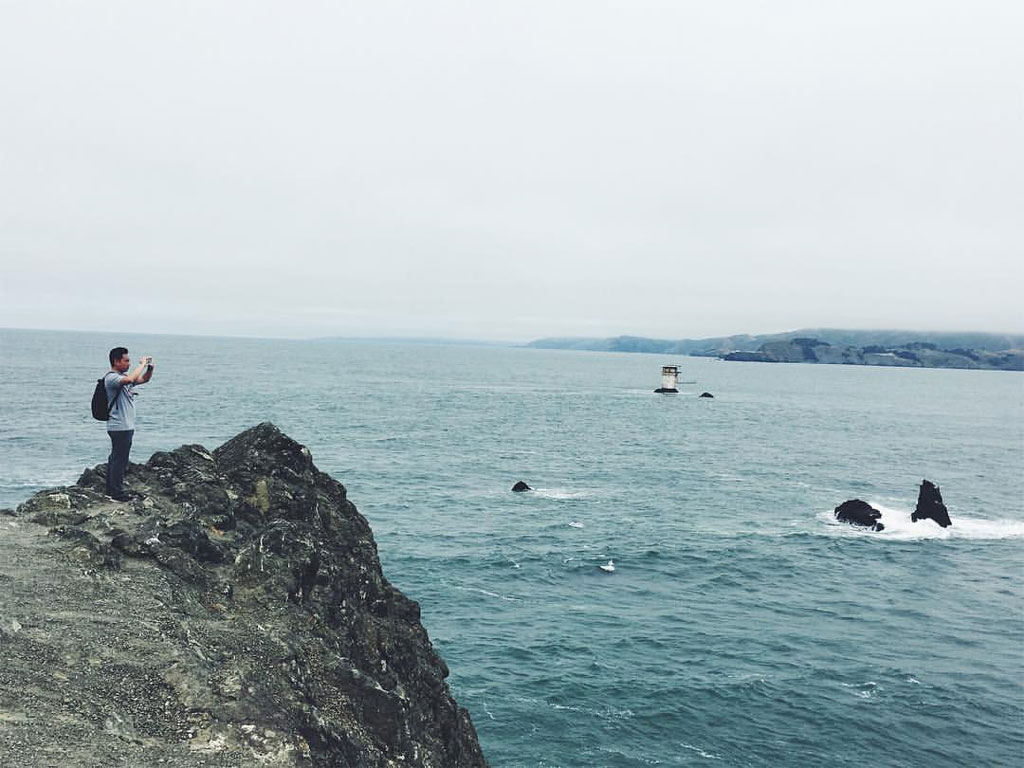 It all seems priceless, but you see it in your rent and the $5 lattes. It’s a beautiful city, but you pay to play. You groan over the prices, but you pay anyways. The city is a casino with open doors. The stakes keep rising and some people just don’t have the chips.

You see the signs of exodus everywhere. There seem to be more dogs than children at every park. The white artists and activists move to Oakland and Berkeley. You watch Valencia Street become vintage boutiques and manic pixie cafes. Every city is constantly in rebirth; you just don’t know what is dying and what is reviving. You don’t know what to save and what to kill.

You see it in yourself: another white tech worker in the city, paid more money to afford more rent. You feel guilty for it but there’s no one to apologize to. There’s no crime you committed except for following the tide, which pulls people West as they have moved for centuries. They looked for gold, for salvation, for an unencumbered life. They didn’t see the endings they brought with them, upon other people.

You see the patterns. You just don’t know how to understand your part of it. But the echoes of the past don’t make it easy. Like the electrical lines against the sky, it breaks the story into a series of complicated pieces.

Close your eyes, though, and you hear the city’s heartbeat. Languages pile into the buses like the Tower of Babel, moving together toward various destinations. You enjoy it most of the time. You feel polite, unable to eavesdrop on every conversation. 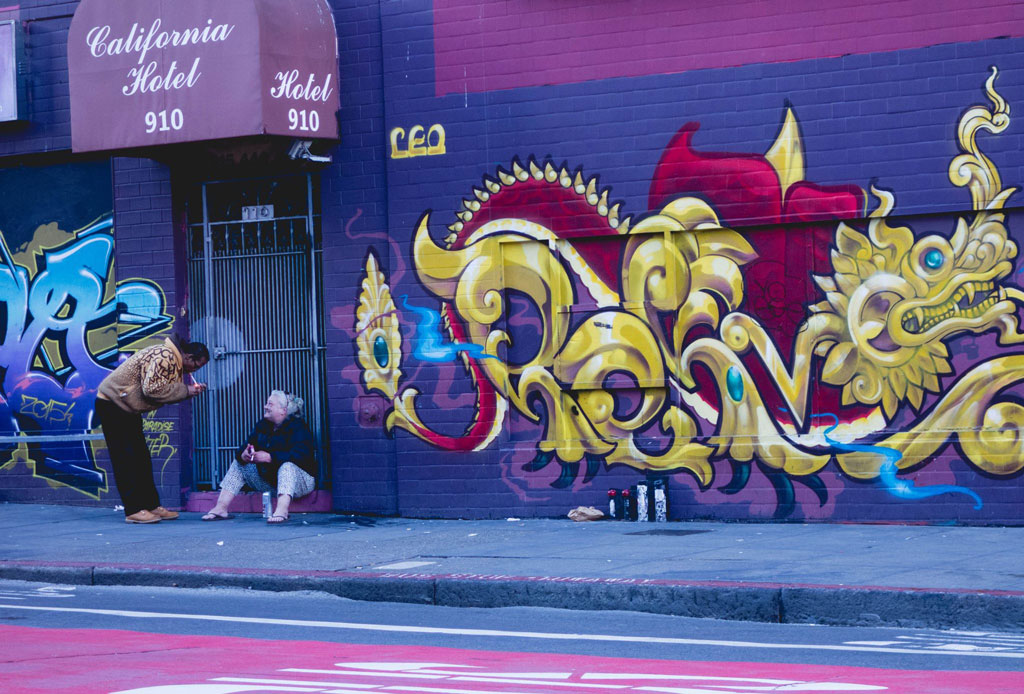 English gets you everywhere but isn’t always home. It sits on top of the Spanish running down Mission. It filters around Chinese in the Richmond and Sunset. Its presence is loud and understood, but it doesn’t quite fit inside the taquerias or the family grocers. Then again, it never has. Somehow, you make this place home, the way the privileged have always made it home. Benevolent condescension of the masses, leaving your lips in a tight smile.

The collision makes its taste almost like a cliché of fusion. Sushi is remade as burritos. Korean reimagines soul food. Poke finds its way into diners. Speakeasies popping on Nob Hill, everything old is new again.

As goes food, so goes the body. You see love and lust reinterpreted here. Naked bodies walk easily outside in only a bit of foil. The casualness of open queer affection still feels radical. The multiracial families continually breaking barriers as they buy groceries. You’ve known so many who hide, you wish they could have this, or at least know it’s possible.

And despite everything, you love this the most. This place isn’t utopia; it’s full of old problems. But sometimes, it takes the vision off the canvas and lets you live and breathe inside it. And why shouldn’t it? It’s just a city doing what cities have always done: making something new old again. 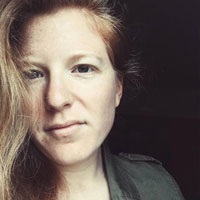 Katie Simpson is a writer and photographer based in San Francisco. Her work has been featured in Brooklyn Magazine, The Hairpin, and Entropy Magazine, among others. When not writing, you can find her drinking chai lattes and befriending dogs. She’s on twitter @honest_creative.

WHILE I WAITED: Traveling in Colombia and Ecuador, an essay by Sean James Mackenney

PHOTOGRAPHY FOR SOCIAL JUSTICE: Portrait of the Artist as a Young Activist by Lena Popkin Featured on Life As Activism