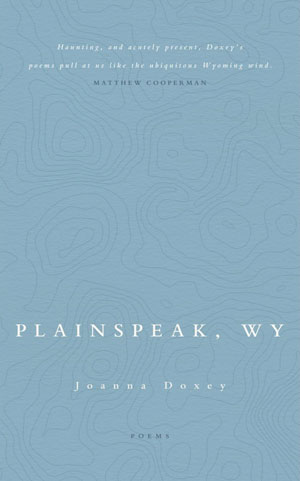 Glaciers, a recurring and defining symbol in Joanna Doxey’s Plainspeak, WY, are unique natural marvels. Unlike other phenomena commonly found in nature, such as mountains or canyons, glaciers travel. Propelled in large part by their own titanic mass, these mobile accumulations of ice and snow slide—albeit very gradually—across great distances. Over long periods of time, they strip the land beneath them of loose soil and rock fragments, then carry these bits of terrain with them, as added weight, to faraway lands. When glaciers finally cross into the warmer climes of lower latitudes, they steadily erode and melt, thrusting polar water and geologic debris upon a new home. The glaciers that once graced the American northwest, for example, have vanished and are now a cold memory, but as Doxey says, the “land is a memory of wind without wind,” for although they are gone, those arctic leviathans undoubtedly have left their baggage behind.

In order to incarnate the scars she shares with Wyoming, Doxey lends her voice to the topography of the title state—formed by the long-absent glaciers that sculpted the land—so as to parallel mindset and setting. She draws us in, sweeps us away in a gust of meadow wind, and leads us through the geographical history of the region. By becoming one with the dirt, Doxey invites her readers on an excavation of not simply the land but also of herself, to study a broken heart that has been layered and molded by time and the cold ice of a snuffed flame. She stresses that “glaciers in their absence shape a land that holds their memory,” as a transfigured heart will likewise insist upon maintaining its transformed state after the departure of a rootless lover—though it’s important to bear in mind that “[s]igns of erosion are not erosion,” that what seems marred may not necessarily be ruined, merely rewritten.

Doxey sometimes arranges the words on the page in a manner that appears scattered, and in doing so visually maps the ordered layers of the heartland (as well as the icy sheets of the vanished glaciers) that she draws upon for inspiration. Thus, while reading, the reader must dig, so to speak—from top to bottom, from left to right—to unearth the somewhat concealed meanings within the text. The unusual spacing between words in the same line, for example, imitates the “air bubbles that tell of ages past, ages before humans.” The poems told in a more standard verse style have a tendency to embody the thawing and falling of the ice, because, after all, “to write about a history of ice it must melt.”

When she is not deciding how to stack individual words and phrases, she is making a conscious choice whether to place a poem—as a whole—at the top, bottom, or in the middle of each page. Many, naturally, start at the top of the page, but the few pieces found at the bottom have a tendency to evoke the deep-down personal musings of the soil and what can be buried under ground—and what all that represents: things left behind, things forgotten. Several more of Doxey’s poems, however, open in the middle of the page. These particular pieces lend themselves to matters of the human condition: ruminations on how hearts, like glaciers, carry reminders of the past and are so burdened with the auxiliary load of that history. For instance, Doxey details such “libraries of cold” with a meaty block of prose on one page in order to contrast with the subsequent page, which is nearly blank, save for the three little words “I miss you” surrounded by emptiness. Nevertheless, for glaciers, weight is power—and Doxey’s weight lies within her words.

“For what it’s worth, I am layered / in words / but cannot speak,” she writes. Like stones from various landscapes that encrust the same glacier, certain words attach themselves to one’s self. Doxey dreads the corrosion of her own dear, “sacred” words, especially the ones close to her heart, as she knows that words have a history, a lifespan; they emerge, then develop, and then eventually dissolve. When a word moves from one of these stages to another, it undergoes a change in its own significance. Overutilization, in general, expedites such shifts—shifts toward a rhetorical melting, for words lose their solidity through simple overindulgence. Therefore, Doxey needs “new words / or none at all” that sing because once the temporal significance is hollowed out, what remains is only “a husk of a word.” And since frequently-uttered words possess the least power, she thus confesses, “I worry when this is done I will have overused all the words I love.” To keep the language of her heart whole, Doxey must hold on to her words whenever possible, or else they too will vanish, as Wyoming’s glaciers have, and she will have nothing but immense silence.

Plainspeak, WY is impressive in its attention to detail and draws clear connections from matters of the earth to matters of the soul—and back again, repeatedly. The poet’s central obsession is depicted, in fact, somewhat subtly, on the cover of the book as a topographical map. Atop a cool, arctic blue, several thin black contour lines unevenly work their way around one another and connect to make shaky targets that reveal the gradual shifts in Wyoming’s terrain, formed largely, of course, by the glaciers that have so ensnared Doxey’s imagination. Plainspeak, WY, ultimately, is about the inevitable erosion of the human heart, as mirrored by the slowly eroding landscape of the northwestern United States. Although the sections that divide up the collection are titled, the individual pieces are not. Each unnamed poem could easily stand on its own and pack a substantial punch, but when strung together—free of the inadvertent barriers that separate titles can create—they form a lyrical narrative of monumental scale.

Brandon Stanwyck studied film, literature, and theatre at Cleveland State University. While there, he led a student-run theatre company. He currently lives in Ohio, where he divides his time between working on independent movies and writing short stories. His fiction has recently appeared in Corvus Review.

LIES I TELL MY STUDENTS, a creative nonfiction craft essay by Liz Stephens

YOUNG WARRIOR ON HORSEBACK, a poem by Kaitlin LaMoine Martin, featured on Life As Activism