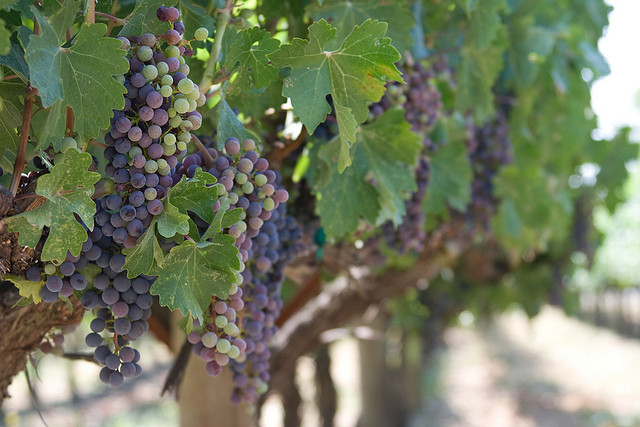 I never realized how impoverished the soil is, how exhaustive the journey, for vineyard grapevines—how much they are forced to withstand to simply sustain themselves. Bob, our vineyard tour guide, explained in a hushed, deferential tone how large pieces of shale and rock are intentionally buried right underneath the roots of the grapevine so that they have no choice but to strain and stretch to painful lengths in order to reach the meager sources of water deep underground. The soil itself is as nutritionless as gravel.

“This is what must occur so that the grapes remain small and tight. If they were to be fed in abundance, watered with the generosity given to other crops, they would swell and dilute in flavor, intensity, and depth.” Bob wagged his finger, “If you want to make great wine, the grapes must suffer.” He presented these facts with the utmost respect.

My brother and I had traveled to Northern California for a week-long holiday. We planned for a few nights in the Mission District of San Francisco before driving up to Napa Valley. We were able to stay at a close family friend’s house while in the city. Our friend’s mom was an on-call nurse who was about to start a twelve-hour shift at midnight that very evening, and although we arrived around ten o’clock with very little notice, an enormous Vietnamese feast of jasmine rice, stir-fried pork, steamed bok choy, and tofu awaited us.

Somehow the topic of her degenerative joint disease came up—something I had never known about during the fifteen-year-long friendship I had with her younger daughter. The disease had progressed at a rapid pace. Her hands were noticeably swollen at the joints when she held them up to the light, fingers spread, palms facing her. Daily, habitual gestures like opening jars, standing inside the bus, going up and down the stairs, and gardening shot keen branches of acid-fire throughout her body. On top of this, as a nurse she ran around lifting, twisting, bending, and carrying equipment and patients. When people accidentally knocked into her, the pain could be nearly unbearable. With gaze straight ahead, she detailed all the chiropractors, physical therapists, and medications she went through year after year that had failed her.

In Napa Valley, my brother and I decided to take a tour at one of the more popular vineyards off Route 29. Shielding our eyes from the sun, we surveyed the endless rows of grapevines that lined the hills of the property. Before the tour, I squatted down next to a grapevine and studied its complexion. The vine looked like a biblical-era vestige, with thick, jagged lines that snaked across the surface as though something sinister had taken its time clawing at it. The bark of this gnarled and somber gargoyle matched the hue of weeks-old roadkill. Only after completing the tour did I understand why the grapevines indeed looked so tortured. The grapes were tightly fisted creatures, wincing in their clusters, barely holding on to life. So this is what is required to make great wine, I thought.

I recalled that the night of our arrival at her home, while we were eating, my friend’s mom took it upon herself to cut up a toddler-sized jackfruit for us to enjoy. We offered to help, but she refused. As she began slicing the unwieldy and gargantuan fruit, she continued to describe her destructive disease, the way in which the pain penetrated ever deeper, year after year, into her being with such insidious, insatiable intent. All of her siblings had inherited the disease. At the end of her life, her mother was wheelchair-bound with her hands curled tight and rigid from osteoarthritis. Throughout these accounts, my brother and I could look at nothing else but her slow, sure hand working the massive fruit with the small, sharp blade. She was so resolute in its execution. The disease would not rob her of her willful movement, her ability to work and cook and slice fruit for her daughter’s closest friends. The vine that constituted her body was going down a path of anguish similar to the grapevine, and yet, just like Bob our tour guide had stressed, that desolation led to such richness. Would my friend’s mom be as beautifully willful and enduring if her soil had not contained that inherited, joint-destroying poison?

It may sound like a terrible question that somehow twists the malice and randomness of such illnesses into justified foundations of good character, but every mother I know is embedded in the same graveled soil; their roots parallel each other in their arduous histories. It seems the mother’s will is fortified because of the strength it takes to sustain a living, not only for herself, but for all the others (husband, children, in-laws), and also because of what it takes to perform all the associated work (housekeeping, cooking, laundering, childrearing). A mother’s weathered skin and knobby hands, her eyes of tempered glass and furrowed brow, all evidence this. Next to the mothers I know, I feel soft as pudding.

On my mother’s fiftieth birthday, she refused to get out of bed. My father couldn’t pry a response out of her. He called and asked me if I would come over and speak to her. I arrived and went up to the bedroom, glancing back at my father looking worried and helpless at the kitchen table. Upstairs, my mom turned her face away from me and pulled the blanket tighter around her neck.

“Are you hungry? I can make you something.”

“No, no I’m fine. Be careful, there are scissors there, right next to your hand. I was
sewing last night. I forgot to put them away, so be careful. Are you sure you’re not hungry?”

This conversation continued to loop like this; she did not address herself once. Just like my father, I was at a loss. This woman who birthed me, whose wrists and forearms hurt so much from years of cleaning, washing, laundering, and caretaking that she had to wear a brace to continue cleaning, washing, laundering, and caretaking, refused to let us know how and what had conquered her agency that morning. Something had finally torn through her root. Something I prayed was not irreparable.

“I love you too. Don’t forget to go to service today.”

She spoke no more. I went downstairs and didn’t know what to say to my dad. I just told him to check on her periodically.

To this day I don’t know why she was so unresponsive. I speculate that a small, dusty window cracked open and the regret (or waning sense of fulfillment or youth) she had buried like wreckage from another time sent up a high keening through that opening and back into her consciousness. She always wanted to be a doctor after immigrating to the U.S. (she became a federal government worker instead). She also wanted for her father (who died when I was a year old) to see my brother and me all grown up. Maybe she had reflected back on her wifehood, and all the ways the horizon, glittering with passions and ambitions now long forgotten in specificity, remained just as far after all these years. And one day she woke up and found herself fifty. Or maybe it was something else entirely. At times her gaze will stay fixed at a point in the space past our heads during dinner and you know that she has flown off to some other place—somewhere we will never be privy to. I imagine many mothers (and fathers) looking past their family’s heads during dinner, experiencing the same out-of-body flight.

Maybe my mom’s birthday morning paralysis and temporary departures are part and parcel of adulthood. One must choose a road and stick to it, and dig both heels in whenever the wind blows harder against the walk—being aware that at times the gale will inevitably bowl the body over. A rooted sensibility becomes necessary, especially if you decide to have a family, in order to keep you from flitting from tree to tree until the life you built, the one committed to, is lost.

I worry through the night about the root which constitutes me; I hear it groaning in the wind. My mom and my friend’s mom, whose roots were cast hard as iron in their scant environments, still falter and bend and crack from the decisions they had to make and the cards that were dealt them. When facing hardship, will my roots hold steadfast or will I snap in half, unable to come together again? Will I wake up paralyzed at fifty… or earlier?

I’m still here, so something essential in my constitution is maintaining itself. I am afraid of exploring what that might be in full clarity and consciousness (if it could even be identified and named). Why would anyone want to dig to the root in order to inspect it? You can’t kill what you don’t discover. Imagining the grimacing bunches of grapes and barren soil, the underground shale and the deformed and lacerated trunk, is enough. The imagining is enough. The root is holding itself together; whatever is enabling its persevering nature is working, and the less detail I know of its makeup, the better. 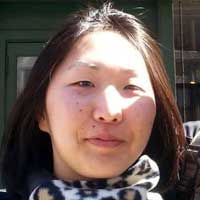 Helen Park received a B.A. in English from Wesleyan University and is currently working on several pieces about family and gender and a memoir about her father’s journey from North to South Korea. Her creative nonfiction appears in BlazeVOX, Sleet Magazine, and Inertia Magazine. She has also published a poem in the Asian-American female anthology, Yellow as Turmeric, Fragrant as Cloves (Deep Bowl Press, 2008).