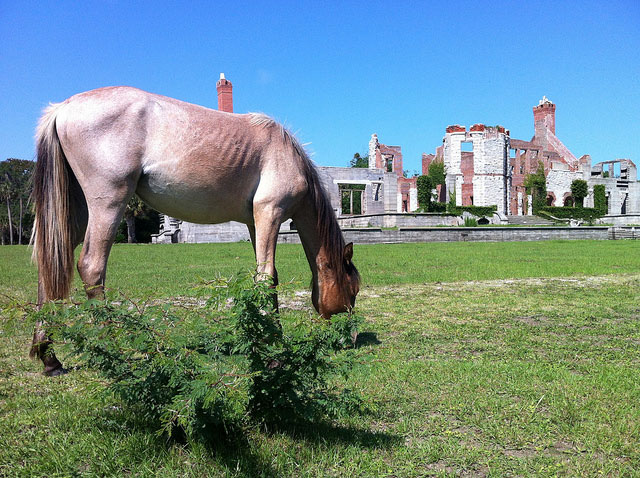 HORSES IN THE WRINKLE
by Cheryl Smart

On an island bigger than Manhattan rests the burned-out remains of the Carnegie mansion, Dungeness. The Gilded Age gilded the Carnegie family, so much so they could buy up pieces of the world to gold-plate. Cumberland Island is one of those pieces. The Carnegies may have bought the island but they filched the name of their fifty-nine–room, turreted Scottish castle from James Oglethorpe, first to build there in 1736.

The word feels good in my mouth, Dungeness; even though the first part of the word is dungeon, the ness at the end somehow beautifies it. Beyond the Carnegie castle, forty other buildings were scattered over the island to house a two-hundred-person staff. But alas, the sequestered estate may not have been all it was imagined to be, because the Carnegies abandoned Dungeness in 1925. The mansion was destroyed by fire in 1959; most of it, that is. Dungeness burned for three days but the tall, tall chimneys and sturdy stone walls would not go down. Those walls would not go down and now they are home to rattlesnakes and overgrown ivy. The Dungeness Ruins will never leave you once you visit them. Photographs are not needed. I have dreamed Dungeness and Cumberland Island a thousand times. More than a thousand times, I have dreamed the horses.

Only accessible by boat, Cumberland Island is now protected as a national seashore by the state of Georgia. Guests must ferry over from St. Mary’s Island. And so I did this, along with my husband and two small children. Over to the island we hauled camping equipment, enough food for the four of us for several days, a few changes of clothing, hiking shoes, a first aid kit, camera, and bug spray (as recommended).

Unblemished wilderness awaits—9,800 congressionally designated acres and fifty miles of hiking trails to discover. Instead of people, Cumberland Island has feral horses. They roam the longest stretch of beach in the country. No one knows how the horses got there. Some believe they are descendants of those that came with the Spaniards in the sixteenth century, while others say they descended from the English settlers’ horses of the eighteenth century. And still, the most pragmatic believe the horses have descended from strong swimmers that were shipwrecked long ago, because who would abandon perfectly good horses on an island?

I waited all week for the horses. I waited until I forgot I was waiting for the horses and went about exploring the island in search of shark’s teeth and seashells. It rained every day.

I hiked a few miles to the beach with my family the morning that the sun finally broke through cotton-candy clouds. We lazed about the seashore beachcombing and marinating ourselves in salt and sun. We could not see the end of the beach in either direction. There was no one on the beach with us, no buildings in sight, just mile upon mile of white sand, ocean, and the maritime forest behind us. We were Carnegies. The only sounds were that of the ocean and my children playing. My husband sat beside me reading Jimmy Buffet’s “A Salty Piece of Land” to further perpetuate the island experience. I felt the horses before I heard them. There was a rumble inside me, benign at first, but growing more urgent as the horses pressed in on us.

The sight of them running to us so disturbed me that I could not react, even to protect my children. My husband rushed to our son and daughter and hurried them out of the path of the galloping herd. My family stood behind me in the soft sand of the beach. The horses ran near the water’s edge. I could not move or speak; my breath ran through me in ragged gasps. The horses raced wildly toward us in a loose knot, I can’t say how many. It took a few moments for them to reach us. When I first saw them, they were far away, the size of seagulls in the distance. They came upon us like so much thunder, their shapes growing larger and spreading out. It was as if they had emerged through a wrinkle in the earth. It was easy to believe when they finished running furiously along our Carnegie beach, they would go right back through the wrinkle to where they had been.

My children shouted their excitement, words I barely heard over the cannon-sounds of those exploding hooves. The horses threw wet sand in clumps behind them. With the storm of horses came the wrinkle in the earth. I am sure of it. When the horses roared down the beach in front of us, I felt their world close in around me. The horses and the wrinkle pulled the earth’s air from my lungs. My children continued to shout but I could no longer hear them, the ground under me vibrated, the sea grew quiet, our world bent to the herd. One of the red ones with a black mane and tail and stocky black legs turned his head as he ran past. We locked eyes. The moment hung still in the air between us, the air that had been vacuumed out of me. In that stillness was whispered the question,

Why are you waiting?

I was taken by the herd then. I felt myself leave my world. I was pulled through the wrinkle into the horses. The vibrating sand was underneath me. I am sure I did not move and yet I was momentarily absorbed into the herd. I was one of them. The horses thundered through me, and I through them. As they moved past, I was nudged, pushed back through the wrinkle, and settled into my own world again. The rumble fell quieter and quieter, the horses became smaller and smaller in the vastness of the island.

They winked out of this world at the other end of the seashore. 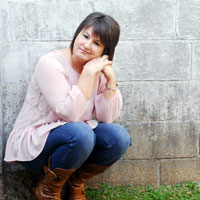 Cheryl Smart, a retired fitness instructor, is a second year M.F.A. candidate at the University of Memphis, where she studies creative nonfiction and poetry and is the nonfiction editor of its literary journal, The Pinch. During her undergraduate years, Cheryl divided her studies between philosophy and poetry. She has works appearing or forthcoming in The Little Patuxent Review, Appalachian Heritage, Word Riot, Crack the Spine, and others.