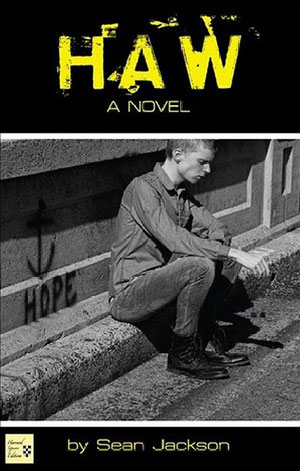 Sean Jackson’s first novel, Haw, recently out from Harvard Square Editions, is an ecological nightmare narrative, the story of a world starved for clean water. When I first came across Jackson’s writing in his short story “How a Ghost Is Made” (in Issue 7 of Cleaver) I was impressed by Jackson’s snappy, lean prose style. In “How a Ghost Is Made,” Jackson portrays a woman who is in the process of pulling away from the husband who is cheating on her. We first encounter Shelly while she is out for a run. As Jackson describes: “She leans into the next turn, bursting up Spindale Street like they taught her at Oberlin: run till you can’t think straight, then back off one gear.” The anger in the story moves similarly—high throttle, then backing off just enough. Shelly runs in a lush setting and her anger as she moves towards her emotional leave taking gives the story a satisfying, raw, unbridled energy. Shelly’s external world—her surroundings on her run—appears full, but her internal world feels stripped down, impoverished, giving some power to her reaching out in memory (however feebly) toward her mother.

The world of Jackson’s Haw is starkly different from that of “How a Ghost Is Made.” In Haw we won’t encounter any sprinklers nourishing lawns or anything even close to what Shelly experiences when “she pops in her earbuds and descends along the bridge into a canopy-covered swath of nature so green it makes her sick.” Instead, in Haw Jackson gives us a remarkably desolate world of the future. 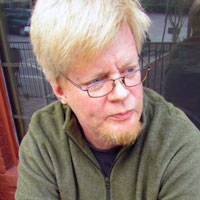 More interesting than the social commentary embedded in this dystopian parable, and more convincing, is Jackson’s portrayal of a quiet but intense father-son relationship. The world the father and son, Lucas and Orel, navigate is a shell of East Coast America as we know it, but internally father and son are remarkably well off. Following the death of Orel’s mother, they’ve needed to count on each other, and in the story we see that they very much can.

In Haw, Jackson writes with restraint about a handful of good people navigating constricting, challenging circumstances. (He also writes of one character, Gail, who epitomizes amoral badness.) There are many nice moments in the book, such as a portrait of a neighbor, an elderly professor, who Orel notes seems to have a strong connection with Lucas. Their neighbor plays piano and when he does it “is as if the two men are communicating. The more Lucas weeps the more melancholy the music becomes.” There is some drama to Haw, but what I liked most about it was its quiet.