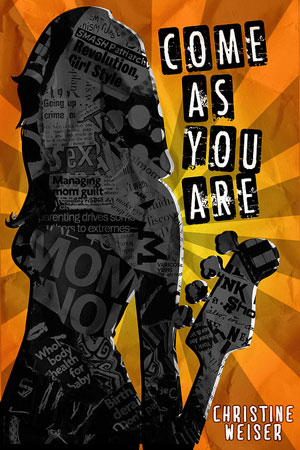 COME AS YOU ARE
by Christine Weiser
PS Books, 290 pages

Is there anything more disappointing than waking up in your mid-30s and wondering what the hell happened? Suddenly, you have a family, children, a mortgage, and a job that, despite your best efforts, is starting to define you. Your sensible car is in perfect order. You have a retirement account. Where’s the punk you used to be? What happened to all those bad decisions you made in your 20s?

This is the crux of the conflict in Come As You Are, a new novel by Christine Weiser. Three friends, now saddled with the responsibilities of adult life, get a chance to relive their grunge rock days. Kit, Margot, and Keri scattered after their band Broad Street broke up. Kit’s a single mother, living with her dad and “succumbing to financial reality” of a part-time job. Margot is a foxy daytime TV personality, sleeping with interns and capitalizing on her sex appeal. Keri, the drummer, is as perky and responsible as ever, settled down with her girlfriend and making good money. However, a sense of dissatisfaction dogs Kit and Margot. Why didn’t it work out? they wonder.

A lucky break gets Kit and Margot back on the tour bus, this time with a new, ultra-young drummer and a whole lot of emotional baggage. Although Come As You Are is ostensibly about the friends’ adventures on the road, a deeply nostalgic thread runs through the novel, coloring every chapter. Kit, in particular, feels pull of the past. “You’re a mom, she scolded herself. A role model. You can’t pick up your old life and sleep with men who have no respect for you. Life’s supposed to be different now.” 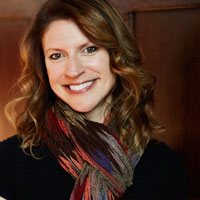 Of the three, Kit’s had the hardest time: an unexpected pregnancy derailed her plans for her future. She’s fallen the farthest, and her dialog crackles with insecurity. Weiser nails the “never was, never will be” anxiety of a rock star trapped in a single mom’s life. Kit doesn’t belong in mommy play-group, or in a suit at her job, and she knows it. Her frantic hopes for the tour are the most genuine, heartfelt passages in Come As You Are, and although she’s also prickly as hell, she’s the one who most deserves her successes.

Kit’s bandmate Margo is the opposite, a perfect foil. Living in an enviable condo, burning her way through her show’s most bangable interns, and still unmarried, Margo has the most freedom and the least to lose. She’s spoiled and entitled, sure, but she also has the connections and the energy to get Broad Street rolling again. “She was great at fronting the band—smiling, dancing, and joking between songs. She was a natural, and that was why there was no Broad Street without Margo…. For thirty short minutes, they owned this stage and this crowd and it was ten years earlier and they were still best friends.”

Come As You Are boasts a nearly airtight plot. It follows the familiar threads of the chick lit genre—but for all its assertions about girl power, there’s no way it would pass the Bechdel Test. Hot guys, bad exes, and potential boyfriends show up like clockwork. It’s a little disappointing, honestly, that two women who came of age in the 90s and were so dedicated to their music lose sight of themselves as soon as a cute guy appears. Maybe this is to make them seem more ‘relatable,’ but it’s a distressing pattern. Grunge and punk and the Riot Grrrl movements were supposed to be about creating space for women’s voices. Come As You Are betrays that message, even as it waxes nostalgic about the 90s and what could have been.

For better or worse, Christine Weiser’s novel is a page-turner—a perfectly on-the-nose story about Philadelphia, rock music, and coming of age the second time around.