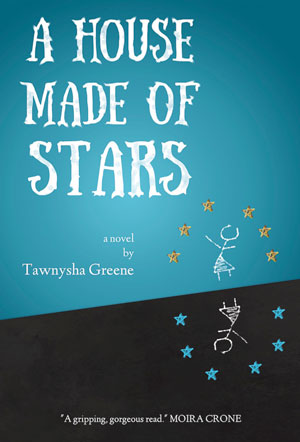 A HOUSE MADE OF STARS
by Tawnysha Greene
Burlesque Press, 189 pages, 2015.

In the very first scene of A House Made of Stars, Tawnysha Greene’s debut novel, the ten-year-old narrator and her sister are awakened by their mother, who spirits them to a darkened bathroom where all three sit in the bathtub, towels piled over them, while the house shakes with thuds so loud even the narrator’s deaf sister can feel their vibrations. Their mother tells them it’s a game. She tells them they’re practicing for earthquakes. But even at ten, the narrator knows it’s not nature’s rage they need to fear. It’s their father’s.

Greene’s voice in this novel is pitch perfect, an eerie and convincing combination of innocence and prescience. The hard-of-hearing narrator is homeschooled and isolated; her mother believes public schools will not teach “Godly things.” Yet her understanding of their family dynamic and her father’s mental illness are intuitive and profound. Without adult labels or filters, we see his depression, his paranoia, his moments of happy, expansive mania that can change in an instant to brutal  outbursts, and the scars he carries from his own violent childhood. We see her mother’s hapless attempts to keep the family safe and fed continually thwarted by her father’s whims. After the family loses their home and moves in with relatives, the children go hungry while Daddy spends his money on lottery tickets. Mama already knows not to question his choices. The girls learn it, too, in a particularly brutal fashion.

While the scenes of violence against children are harrowing and at times hard to read, A House Made of Stars also has moments of beauty and hope. There is a timeless, quiet feeling to the story, especially when the two girls are alone with their mother, that makes it feel almost as if it is taking place in a long-ago world. Despite her inability or unwillingness to protect the children, we sense Mama’s love for them. It is her mother’s stories of the stars and the myths behind them that help sustain the narrator, as well as the letters she writes to her cousin, describing what is happening with her family. Later, when the family are on the road, the narrator leaves these notes hidden along the way, both memoir and cries for help. 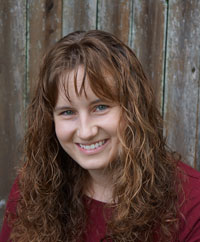 At so many points during A House Made of Stars, we find ourselves sensing the danger these girls are in, wishing we could intervene. At so many points, their life seems to be changing for the better–their father’s sister offers money and a safe place to stay, their father sells his van, their grandmother takes Mama and the two girls to live with her when she learns Mama is going to have another baby–but something, either Daddy or Mama’s stubborn submission to him–always pushes them away from safety. A poignant and telling moment comes when the girls’ grandmother is reading stories about Biblical women  from one of Mama’s books. She finds some of the pages stapled together and wonders why Mama has cut off access to these stories. The stories Mama didn’t want the girls to read–Esther, Jael, Deborah–were about strong, independent women. This ties back to an earlier scene in which Mama walks out of a church because a woman is going to speak. Her fundamentalist beliefs compel her to follow her husband, even when she knows he is wrong.

The narrator, fortunately, hears those stories from her grandmother, and in the end she becomes her own heroine, making a brave and risky decision to act when her father’s recklessness leads the family into a truly desperate place. While the ending leaves the narrator’s future open, we know her well enough to believe that she is a survivor and will find a safe haven for her sister and herself.

Tawnysha Greene has published short fiction in an impressive range of journals, including PANK, Bellingham Review, Bartleby Snopes, Monkeybicycle, decomP, elimae, Bluestem Magazine, Necessary Fiction, and Cutthroat: A Journal of the Arts. She teaches writing at the University of Tennessee in Knoxville. A House Made of Stars is her first novel, but she is working on a sequel, and that’s good news for all of us who want to want to know what comes next for her courageous and compelling young protagonist.

Kathryn Kulpa is the author of Pleasant Drugs, a short story collection, and Who’s the Skirt?, a microfiction chapbook. She is flash fiction editor at Cleaver and has published work recently in Smokelong Quarterly, The Flexible Persona, Carbon Culture Review, and Litro.