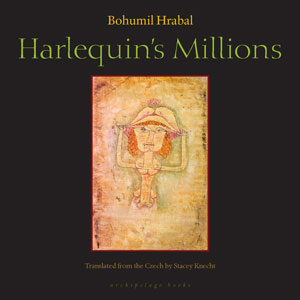 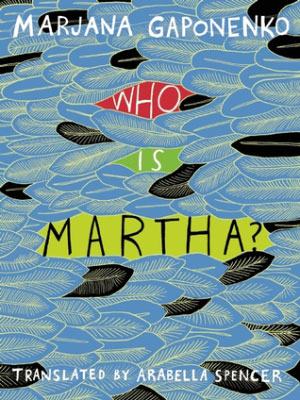 We had grown old, yet we were still the same as we’d been when the war ended, I had moved even further back, to the last century, which had risen for me from the dead. This retirement home with its Baroque halls and garden, this castle in which I lived, suddenly meant more to me than that golden brewery of mine, where I had spent my younger years. Here in this castle I lived every day in the mystery, in the strata of human destinies of people who had long since been buried…
—Bohumil Hrabal, Harlequin’s Millions

Levadski did not have much time left to forget. According to the diagnosis he should have felt dreadful…From the breast pocket of his pajamas, however, his heart announced an overwhelming joy at beautiful things, pleasure and desire, to see beauty like the light of God’s face. Beauty in spite of the revolting decay of the institution of his body, beauty in spite of ugliness and precisely because of it. Beauty.
—Marjana Gaponenko, Who is Martha?

The recently published novels Who is Martha? and Harlequin’s Millions each features an elderly Central European protagonist living out the end of life in rarefied surroundings, reflecting on disappeared worlds and searching for a true source of beauty. In each book old age becomes a kind of landscape: dim in the corners and mazelike at times, lapping back over itself, but punctuated with clarity and painfully lucid recollections. The protagonists navigate this terrain with variable steadiness, stumbling through local folklore and jarring hallucinations, but never entirely losing a sense of humor about the whole enterprise.

Harlequin’s Millions may be the more melancholy of the two books; it is certainly the denser. Hrabal’s distinctive prose style utilizes long, wandering sentences connected by ellipses, capturing the first-person narrator’s thoughts in a fluid, almost musical fashion. Each of the fifteen chapters is a single paragraph (fortunately the book designer of this edition opted for a small, square page, making the wall of text a little less daunting), narrated by an unnamed woman who lives with her husband Francin and his brother in a retirement home at what was once the magnificent estate of the aristocrat Count Špork. The plot doesn’t move forward so much as deepen; each chapter is like another one of the narrator’s rambles around the castle’s grounds, covering the same territory but discovering new details. She recounts not only her own history—her days as a local beauty, her attempt to run a perfume shop in Prague, the collectivization of the brewery that Francin managed—but that of the small Czech town where they lived.

The Czech Hrabal (1914-1997), much admired by Milan Kundera, isn’t well known in the English-speaking world. He published Harlequin’s Millions in 1981, near the end of his life. This first English translation of the book by Stacy Knecht was released in May. Of his many novels, the best known are Closely-Watched Trains (1965) and I Served the King of England (1971); some of his work could only be published by underground presses due to restrictive government policies in then Czechoslovakia, though he shied away from outright political dissent. 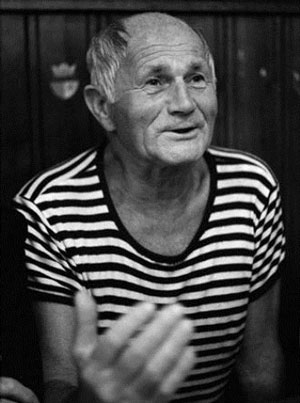 The town “where time stood still,” as the narrator often calls the setting of Harlequin’s Millions, may resemble the writer’s own hometown of Nymburk, where his parents ran a brewery; Hrabal notes in an afterword that he incorporated the newspaper columns and memoirs of several local elders into the text. The narrator herself encounters three men with the same names and is spellbound by these “witnesses to old times,” whose memories stretch back further than her own. Yet their memories are in danger of being lost, too; the graveyard is dug up, and they mourn the loss of the stories behind the inhabitants’ nicknames in a litany of odd appellations: “This is the end of the golden old times, where have they taken those tombstones, where are Červenka the Parasol, Červenka the Perch, Červenka the Gimp, Červenka the Lousehead, Červenka the Periwig, Červenka the Greyhound, Červenka Busted, Červenka Koruna, Červenka the Cigar, Červenka Sweatbuckets, Červenka from Upstairs, Červenka Untergleichen?”

But if the book is love song to a town’s history and a vanished way of life, it does not remain restrained by or insensibly enamored with the past. When the narrator and Francin leave the retirement home and walk through town one day she realizes that “time certainly hadn’t stood still in this little town for the people I’d seen streaming back and forth across the square and down the streets and avenues, boarding the buses, that their time was now, that the only time that had stood still was the time that I was happy…”

The title Harlequin’s Millions refers to a piece of music that is constantly piped through the castle’s sound system. It’s both a maudlin tune (a “chintzy, chocolate-box melody” like something that would accompany a Chaplin film, the narrator tells us) and an anchor, a literal motif that grounds the narrative. In Who is Martha? birds have a similar role. The book’s protagonist Luka Levadski is a 96-year-old ornithologist, and birds find their way into his thoughts constantly, especially Martha, the last carrier pigeon, who died on the day of his birth in 1914. His earthly possessions include an unlikely dictionary that translates the language of ravens.

A Ukrainian author who writes in German, Gaponenko, born in 1981, has also published several volumes of poetry, not surprising given the visually rich language here:

The elevator came almost immediately, opening its golden chest. From all sides Levadski could see a small bald dandy staring back at him. This hotel is a ship, thought Levadski stepping into the elevator, a ship, and I am a black-headed gull on deck.

Although individual poems have appeared in English, Arabella Spencer’s translation of Who is Martha? is the first full-length work of Gaponenko to appear in English; her first novel, Annushka Blume (2010), and several volumes of poetry are available in German.

Levadski is a spry 96, a bit of a twinkling-eyed prankster figure. A European mutt, he was born in Galicia, raised in Vienna, and lives in Odessa as the book begins. He receives a diagnosis of terminal lung cancer and, rather than submit to treatment, buys a new suit and a walking stick filled with cognac and flies to Vienna to enjoy the chocolate cake and classical concerts of his youth, determined to live out his days in the extravagant Hotel Imperial until his savings or his life run out.

If time and memory are the inevitable concerns of a novel with such a protagonist, Ledvaski tries more emphatically to shrug them off, inhabiting his present forcefully, ordering Iberico ham in the hotel restaurant even as he doubts his ability to chew it, requesting rose-colored silk lining in his suit even as he’s keenly aware of his physical decay. Although the author spends several chapters detailing Ledvaski’s life story–attending classical concerts with his great aunts, fleeing to Chechnya with his widowed mother during World War II—the meat of the book takes place at the hotel, particularly in his relationship with his Palestinian butler, Habib, and a strangely competitive friendship with Mr. Witzturn, another man staying alone in the hotel, who claims to have a plastic nose. The two men treat their age as a kind of rivalry. (“A pretty boy, thinks Ledvaski, as smooth as an egg. How old can he be? Eighty, eighty-five at the most!”) The final part of the book is taken up with their last hurrah, a glimmering night on the town that verges into the surreal as Ledvaski slips in and out of bird-filled dreams.

Who Is Martha? is faster paced than Harlequin’s Millions, the tone a bit more wry. Yet perhaps due to the characters’ closeness to the great unknowable-ness of death, both allow room for the possibility of the magical: the “witnesses to old times” might be ghosts; a young female “cosmonaut” who might just be Gaponenko herself appears at the bar and then vanishes into a cocktail glass. Both books end by dwelling on a similar question: What is it that has given shape to one’s life? What landmarks remain clear and illuminating as the rest fade away—the smell from a broken bottle of perfume, the memory of a young girl eating cake? Both books necessarily have a dual timeline—the plot duration (the days in the hotel and the castle), plus the entire life of the main character, and indeed the whole scope of history that has forged the present moment. We all have these dual timelines; we all live simultaneously in the past and the present. How to handle this balancing act on the page? Hrabal and Gaponenko solve this riddle in different ways. Hrabal chooses to immerse his characters ever deeper in the past, exploring and finding what others have forgotten, taking a Proustian luxury in memory, while Gaponenko fights against its reach, scrabbling with a youthful energy for those last few moments of the present, even as the images of the past begin to burn brighter while the real world dims.

Michelle E. Crouch, a co-founder of APIARY Magazine, has been published in Indiana Review,Treehouse Magazine, and The Rumpus. She currently lives in Raleigh, NC. Her website is mcrouch.com.