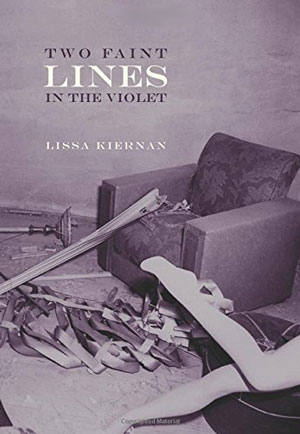 Lissa Kiernan’s debut collection radiates, burns, and fluoresces like uranium glass, like a “bed of plutonium nightlights.” Many of the poems, especially in the first half of the book, focus on her father (“My father, my leather fetish, my motorcycle papa”) and deal largely with the grief she experiences as he dies from cancer. But these more intimate revelations are not allowed to remain solely in the realm of the personal, set off as they are by poems of a more political, or rather politically charged nature. These poems—some of which are found poems based on official documents and newspaper reports—indict the Yankee Rowe Nuclear Power Station for contaminating the town where her father lived in Massachusetts. The intrusion of the faceless other on the integrity of the human body—and the power plant is not the only example of this—gives these poems their unique and disturbing power.

For example, in “The River, My Father,” the very first poem in the book, Kiernan appears to have written a prose poem, but although it is a solid block of text, it is made up almost entirely of fragmented language further interrupted by the refrain, “My father.” Something sinister is hinted at in the Heraclitean slippages between the fragments and the refrain, and in “Fresh Plot,” we find out what that sinister something is. Her father says,

And yes,
a nuclear power plant one mile upstream,
but not to worry—it is being decommissioned.

This reference to the real demon in the text is couched, very cleverly and tragically, as a total misunderstanding. It is because the plant is being decommissioned that her father will eventually develop a brain tumor. In “Disposal,” for instance, we get a much more sobering picture:

The floodgates of waste are opening.
1 in 10,000 will die
from radioactive exposure
during nuclear waste transportation.

Kiernan has a real gift for interruption. She knows just where to put the spaces, where to pause, and where stop us in our tracks. At regular intervals throughout the text, she introduces a page of white space with only a very short poem at the bottom left. I like this conceit enough that I think it is worth discussing in much greater detail. The first of these poems is a haiku that appears fourteen pages in. My assumption is that the white space on the page is meant to represent the space in her father’s brain or in his memory, or the interruption in time, caused by the brain tumor:

brain tumor
a bear breaking through
the skylight.

Then 13 pages later, we find another of these interrupting haiku poems. This tercet has a functional role to play as well as describing another absence—in this case the absence of the mother figure: “my mother’s/ lips—sotto voce.” The reader may wonder why the responsibility to care for her father fell to Kiernan, and it is because the parents are divorced. Kiernan informs us early on that her parents separated because her father realized late in life that he was gay. Later on in the book, however, these koan-like poems turn inward and focus on the speaker instead. The haiku become tanka poems, but they too focus on the space where fear fits and words run dry:

first date
after being mugged
I swallowed my fear
can’t stop staring at your knife. 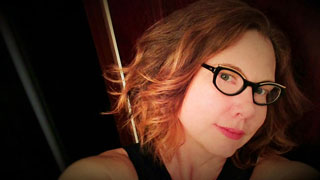 The mugging mentioned above appears in the second half of the book, which takes place in New York City. Kiernan admitted in an interview with Negative Capability Press that she was a “country mouse coming of age in, and coming to terms with, living in New York City,” but it occurs to me that the latter half of the book is also about the concept of transmission and is therefore a logical extension of the father poems. She titled part one, “The Daughter Element,” a term that describes what is left over once a radioactive element undergoes decay. As the epigraph explains, “The daughter may or may not be radioactive.” Up to this point, she has been the daughter, but in the poems “Conjuring Ada” and “Banishing Ada” we are introduced to her imagined daughter—imagined because she is yet to be born: “It isn’t hard to recognize the forecast on her face. / Once more, Mama’s belly will not rise, baby.”

Infertility is a major theme in part two, and I think it is more than implied that Kiernan wonders if her infertility might not be a legacy of the plant decommission, might not be a sign that she too is radioactive. In “Meltdown,” she says, “You’ve contaminated everything that was cherry blossoms” and concludes, “let me wear the hazmat suit.” And then there is another one of those interrupting poems—a sedōka poem—that mentions “Driftwood skeletons,” which invokes for me, at least, the lost child that never was. In “On Closure,” she faces this loss head on:

The crone, upon being asked
for her greater wisdom, tells me:
know when the time for a thing is over—
I teethe on this. It tastes true.”

But to focus only on loss is to do the book a disservice. There are many poems that show off Kiernan’s sly charm and tough girl attitude. In spite of the anguish she feels over losing her father, the hardships of the big city, and the loss of Ada, the speaker asks by book’s end to be returned to the river that ran by her father’s house, the same river mentioned in the first poem in the book: “I was born into this river. Into this river, spread my remains.” The last word, then, is one of reclamation, a reclamation that can be fittingly described in her own words as “the beautiful-terrible, the fortunate hazard.”