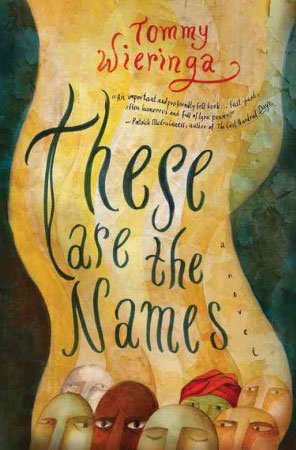 THESE ARE THE NAMES
by Tommy Wieringa
translated by Sam Garrett
Melville House, 231 pages

The hero–or perhaps I should say anti-hero–of Dutch author Tommy Wieringa’s new novel, These Are the Names is a 53-year-old police chief named Pontus Beg. Beg lives in a fictional border town called Michailopol, a city ailing in post-Soviet corruption and aimless malaise. Beg has “set up his life as a barrier against pain and discomfort,” Wieringa writes. “Suppressing chaos: washing dishes, maintaining order. What did it matter that one day looked so much like the other that he could not recall a single one; he keeps to the middle equidistant from both bottom and top.”

Beg’s life is governed by habit, by a desire to stay “in the middle.” In order to keep things in line, he creates rules for himself. When he drinks he allows himself four glasses of vodka but never five. Once a month he sleeps with his housekeeper, when she is less likely to become pregnant. He still drives an old service vehicle, refusing to steal a newer car as many of his subordinates have. He lives amidst the corruption of the police force without actively participating in it.

This stasis is interrupted by two events: the discovery of a hidden family past, and the arrival in Michailopol of a group of nameless, undocumented refugees. The first is motivated by the death of Rabbi Herz, a man thought to be the last Jewish person in the city. Searching for someone who can give Herz a proper burial Beg meets Zalman Eder, a rabbi living in a disused synagogue who becomes a spiritual guide of sorts. Throughout the rest of the novel the synagogue becomes a space detached from the rest of the world, almost like the “Green World” of the forest in A Midsummer Night’s Dream, a space where characters are freed from the constraints of society in order to explore their own desires. Wieringa describes Beg’s first tour through the empty synagogue:

The high, open space was a hallucination–after the darkness, it was as though the heavens had opened […] Beg walked past the podium in the middle, a cupboard draped with curtains, and the stone steps leading to the platform above it all. He knew nothing of what had been said and done here, in this mysterious world where the memory of a journey thousands of years old was kept alive. This, then, was where that journey ended, and there stood the last traveller, waiting for him to get his fill of looking.

Journeys and travel are a fascination for the author, and the theme is taken up with the group of refugees lost on the steppes. The novel alternates each chapter between Pontus Beg’s daily life in Michailopol, and the painful, slow journey of five men, a woman, and a boy across a barren wilderness. Wieringa weaves the tale of the refugees like a crime novelist, cautiously doling out clues and glimpses of their past, even keeping their names revealed until near the novel’s end when the two previously autonomous storylines meet.

The group’s arrival in Michailopol doesn’t happen until quite late in the novel, but from the very first chapters Wieringa makes it clear that these two stories have a spiritual, symbolic connection. The most obvious, as Beg learns more and more about the Jewish tradition, is the tale of Moses leading the Jews into the desert where they would wander for 40 years. Yet beyond that, the whole work is also underlain by a feeling of endless search, a sense that there is nothing clear to trust, and no one that the characters can rely on beside themselves. This vacuum is reflected in Beg’s self imposed rules, in his fear that if he doesn’t wash his dishes, or has more than four drinks, chaos will descend. And it’s summed up perfectly by a comment one of the refugees makes to Beg while in police custody. “Once you choose a direction,” he says, “you have to keep following it, otherwise you go completely nuts.”

As police chief, it is Beg’s duty to find out where the refugees came from, uncovering their names and motives for leaving their homes. Yet the refugees have also been malnourished and exposed to the elements for months. Behind their backs, the police compare them to victims of the Holocaust, gaunt figures, lucky to be alive, and so poorly treated that they might not be able to make the recovery back to society. This reentry, a chance almost for rebirth, is another thread that ties Beg’s fate to that of the refugees. He is attracted to the idea of a restart, the fantasy of a clean slate. Standing near the synagogue’s mikveh (a ritual pool), the narrator states:

[Beg] wished he could undress, go down the steps to the bottom of the basin, let his body go under, and cleanse it of the world’s filth. Even the filfth that did not wash off, he would scrub that away, too. A new soul–there, deep in the earth, with this magic water, that kind of thing seemed truly possible. What a pleasant, comforting thought […] to shed his old soul, that tattered, worn thing, and receive a new one in its stead. Who wouldn’t want that? Who would turn down something like that?

The analogues to spiritual rebirth, baptism, and the desire to return to the womb, are all at play in this moment, and if the symbolism seems a bit heavy handed that’s because it is. But Wieringa doesn’t seem to care. Instead of being topical, These Are the Names is metaphorical and symbolic; instead of relying on science it employs mysticism and spirituality; instead of grounding us in time and place it revels in a fictional in-between, a time that could be our own and yet seems not to be. The book is more parable than realist fiction. And though it sounds like a criticism, I don’t mean it to be. In my opinion, the surrealism and mysticism, this sheer bizareness, is the strongest aspect of These Are the Names. It employs the kind of gruesome and bold symbols that might be at home in a Brothers Grimm tale, or, as I can’t help but assume Wieringa was shooting for, the Old Testament. And by the time you’ve reached the novel’s climax, he’s done his groundwork well enough that you’ll forgive an instance (or a few) of hackneyed imagery.

Yet the largest drawback, in my opinion, to These Are the Names, is a problem of representation. On the steppe, the refugees are debased to an excessive level of violence and dehumanization. They turn against each other, let the sick and weak die where they fall, and ultimately commit a brutal attack on the only member in the group who does not share their language and skin color. The balance between attempting to depict hatred and traumatic events which could, and have, occurred in the world, without slipping into cliché and gratuity, not to mention displaying marginalized groups in a unfavorable light, is treacherous. And while I don’t think Wieringa should have turned his novel into an editorial, at times it did feel a little tone deaf towards the very real refugee crisis in Europe, which was approaching fever pitch at the time of the novel’s Dutch release in 2013.

This disconnect is also part of the reason for my ambivalence toward the “timelessness” of Wieringa’s novel. I was haunted and transported by These Are the Names, and the images that Wieringa so deftly sketches are likely to linger in my mind for a long while. But when Wieringa relies so much on timelessness and a connection to ancient peoples and places, it’s hard not to wonder if he could also have said a bit more about this time and this place.