I’M FINE. HOW ARE YOU?
by Catherine Pikula
Newfound, 46 Pages
reviewed by Robert Sorrell 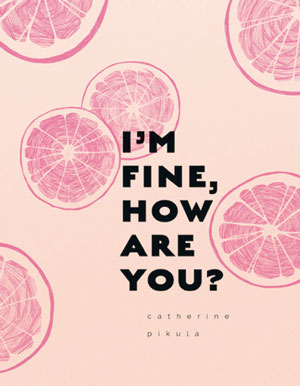 A few days after I finished Catherine Pikula’s chapbook I’m Fine. How are You? I read the following sentence: “I would like to make a book out of crumpled-up pieces of paper: you start a sentence, it doesn’t work and you throw the page away. I’m collecting a few … maybe this is, in fact, the only literature possible today.” The sentence came in the last hundred pages of The Story of a New Name, the second book in Elena Ferrante’s Neapolitan novels. And while the “today” referenced above was Italy in the 1960s, the description was oddly reminiscent of the small, thread-bound chapbook published in 2018 that I’d recently put down, I’m Fine. How Are You?

Composed in a fine but digressive and fragmented prose, with short sections ranging from a few paragraphs to a few lines, I’m Fine. How Are You? is a work that doesn’t fit neatly into any one genre. “‘Is it a Lyric Essay? Is it a Long Poem? Is it Meditations?’” wonders poet Matthew Rohrer in a blurb for the book, but Pikula doesn’t seem interested in parsing genre. Instead, I’m Fine offers an intimate view into the author’s life in New York City, in an engaged voice that knits together disparate topics and ideas, blending the personal and intellectual in passages like the following:

It’s a reach, but I’ve chosen to take it as a sign. To understand why, when I set out to write about sex positivity, I instead found myself writing about loss, requires that I enlarge and examine the ashes from old flames.

In my memory, an old flame says: Don’t expect a particular result, you’ll only be disappointed.

Pikula is often switching between these two registers: a poetic, academic speak and a droll, personal tone that’s like a friend telling you a story at a bar, stopping every now and then to say, “Well, maybe I shouldn’t tell you this, but…” Pikula often broaches a topic (sex positivity and loss) only to deflate it with a poignant—and sometimes funny—anecdote (“you’ll only be disappointed”).

The main arc of I’m Fine details Pikula following a lover’s road trip from afar. In Instagram posts, she watches him travel across the country over the span of weeks. “At our meeting, my teacher E compared the lover on a road trip to the lover having an affair. Is it still an affair if you’re not ‘dating’ but it feels like you are?” While the lover is away, Pikula’s street in Brooklyn is transformed into the 19th century for a filming of the TV show The Knick. She sends him pictures and even tries to watch the show a few times. In the space of this trip and the lover’s non-presence, Pikula thinks through a friend’s death, gender, body image, sexuality, trauma, and abuse. 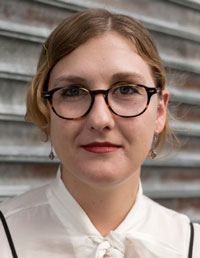 Pikula’s use of terms like “old flame” and “lover” push a tension, or perhaps a better description would be a balance, between the abstract and personal. Sometimes I’d forget I was reading a work of nonfiction only to be pulled back in by a sharp comment or snatch of dialogue. As a way of protecting people’s privacy, Pikula identifies characters by one letter or, in the case of “the lover,” a phrase. These specific-yet-generic people, people who do not really appear in the work except in reference, provide the cast for I’m Fine, a cast that feels viscerally real while also, by virtue of their names, archetypal—the lover on a road trip, a string of friends and acquaintances, past versions of the author who seem painfully close but distant.

Reading I’m Fine. How Are You? reminded me of Maggie Nelson’s Bluets and The Argonauts. Both authors manage to collage complicated emotional landscapes out of fragments, mixing an almost-academic approach to research art, literature, science, and linguistics with highly personal stories. Sometimes for Pikula, these personal moments are just observations, like a moment in the bathroom, when she sees a stranger tying their boot, adjusting their stockings. “I’m having the kind of day where I don’t know how to talk to anybody,” Pikula writes before relating this image. But there is also a fascination with language and the power of naming. She writes:

C uses gender neutral pronouns. To overcompensate for mistakenly using masculine pronouns when referring to C, I have started mistakenly misgendering those who use the binary ‘he/she’ with the gender neutral ‘they,’ and yet, this feels right somewhat in that nobody is ever one thing all the time.

Gender aside, nobody is one thing.

This segment gets at a sense of multiplicity, a space for the endless strangeness of individuals in I’m Fine that keeps the autobiographical content from feeling myopic. One feels that the narrator would not necessarily be surprised or angered by anyone’s actions. Pikula’s prose is wonderful in these moments, turning so quickly and smoothly from the personal to the abstract and back again.

However, underneath this ease is diligent organization and attention to detail. According to an interview on the Newfound website, Pikula spent three years on the piece before submitting it to the Newfound Prose Prize, which it won in 2018. Her background in poetry—she holds an MFA in the genre from NYU—also shows in her diction and careful modulations of voice.

In that same interview, Pikula mentions that “The smartphone is a kind of phantom and complex character in the background of this piece.” And in a strange way, I found this to ring true. Like trying to piece together someone else’s life through their text messages, I’m Fine gives you a fractured and sideways-yet-intimate view into Pikula’s life, including both the everyday and the fantastical. The result is often melancholic but surprisingly comedic, like when Pikula writes:

Loss does not fully contain the feeling of ‘sometime’ no longer being possible.

It comes from Old English, los, ruin or destruction; Old Norse, los, the breaking up of an army; and Proto-Germanic, lausa, dissolution.

In moments of linguistic inaccuracy, I grope helplessly toward the internet.

I’m Fine has the mysterious force of a story found on a message board, a poem read on Twitter over lunch break. There’s an anonymity to it, an unassuming air that makes it feel strangely vital and memorable. It’s something you read without expectation and find that, two weeks later, it’s stuck in the back of your head.

I’m Fine has the mysterious force of a story found on a message board, a poem read on Twitter over lunch break. There’s an anonymity to it, an unassuming air that makes it feel strangely vital and memorable. It’s something you read without expectation and find that, two weeks later, it’s stuck in the back of your head.

This is something that Maggie Nelson also does masterfully. In the first few pages of Bluets she writes, “Do not, however, make the mistake of thinking that all desire is yearning. ‘We love to contemplate blue, not because it advances to us, but because it draws us after it,’ wrote Goethe, and perhaps he is right.” Shortly after this, she adds, “Above all, I want to stop missing you.”

I worried that comparing Pikula and Nelson may be a bit facile, but the more I wonder whether my mind is making this connection based mainly on the author’s gender, subject matter, or writing style, I realize that these books feel like they are joined in a similar conversation. A conversation around gender and writing about pain and trauma, but also a conversation around rethinking new and radical forms for written expression, modes of writing that can perhaps free themselves, ever so slightly, from the constraints and baggage of more traditional verse, essay, or story.

But, as Nelson writes in The Argonauts, (citing Pema Chödrön in italics) “Perhaps it’s the word radical that needs rethinking. But what could we angle ourselves toward instead, or in addition? Openness? Is that good enough, strong enough? You’re the only one who knows when you’re using things to protect yourself and keep your ego together and when you’re opening and letting things fall apart, letting the world come as it is—working with it rather than struggling against it. You’re the only one who knows. And the thing is, even you don’t always know.”

In I’m Fine. How Are You? Pikula crafts a kind of literature that is not afraid of openness, letting the world come as it is, and admitting it might not always know the answers. “How am I doing?” Pikula writes near the chapbook’s end. Her response is simply: “Alive.”