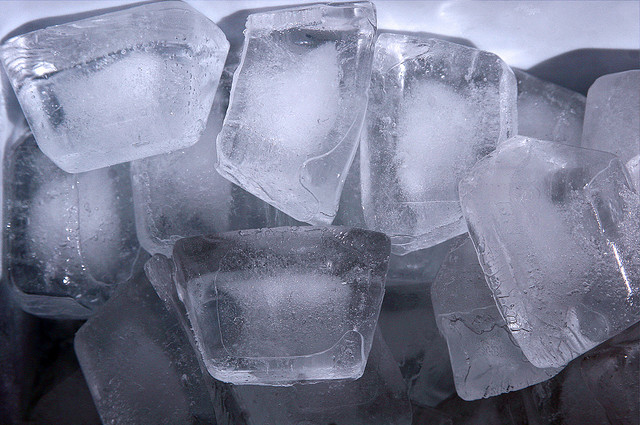 How fast are we moving do you think.

She’d been lying back with her eyes closed and with her sunglasses off and above her head on the ice, nothing between her and the cold bright rays but as I spoke she reached to the glasses and crunched forward at the waist. Her legs pivoted upwards a little in reaction then back down and she pushed the sunglasses onto her face. Not far to her left the ice was clinging to rock and in places it was cracked and fissured with slow pressures but to the right the side of the valley wasn’t visible beyond the hump of the glacier and down further at the valley floor, sunk in green and surrounded by trees and heat the house did its fairytale thing. Stacking upwards turreted from the land. She brought her knees toward her and hooked across them and peered down the slope.

I don’t know. A half metre a day maybe.

When I touched the ice my fingertips came back dry. It was pitted and uneven and it had had specks of dirt and grit ground into it by footsteps or deeper down by the building layers of snow and, looking across, it was a mottle of black and pale blue running deep. My hands were pale and I moved them into the crooks of my knees and I squeezed. I listened to the scrape of rocks and the creak of ice and the occasional startling crackle or crash that echoed up to the snowpack. Once there was a crack and a scatter of ice chunks and rocks a little ahead of us down the valley and the crack was loud and extended and the detritus rolled and bounced down into some newly-torn crevasse and above it all the silent flow of the glacier itself.

There were bird silhouettes above, between the high glare-blanked sky and me and on the way up from the house I’d seen deer and marmots. At the valley floor the heat rose straight out from the grass in a long wet haze but up here the air was cold and dry and my hoodie and jeans did little against it and my ski mask was stuffed unused into my front pocket.

She noticed my shiver and she shifted over and wrapped her body, obscured by layers of down and fleece, around me and her head rested on my shoulder and her face moved up to touch mine at the side. The arm of her sunglasses pressed into my cheek and, blurred in my periphery, I could see the slight shaded swivel of her eye. She was still looking down toward the house.

Rah she said. Her teeth scraped the cold flesh of my face and dug for a second and she grinned and she laughed. I could have told you that.

I settled back toward her body and I moved my hands to hold on to her arms and push them further into my chest and I slumped forward a little so my whole top half shared in her coat.

Better than being inside all day though. When this is what’s out.

She tightened. I felt movement somewhere beneath her thick clothing and I was shifted around in her arms and she rustled and crumpled. She brought her legs around to cross my waist and her boots cracked down into the ice between mine. Thumped down and made heel-shaped furrows edged with new white powder. She was above me now and in place of her skin the matte polymers of her coat scratched against my face.

How is your guy though she said.

Down the hill in the house in a room with blacked out windows he would be sitting in his chair looking downwards, dripping saliva on bare broken legs with floodlights oscillating on her own jerry-rigged circuits and the music following their patterns; irregular rapid snaps of dark noise; he’d be closing his eyes and pulling his lips back, and his teeth and gums and whole mouth were all ruined with the rest of him. When I came to him in the evenings or the early mornings and I opened the curtains the saliva was pinkish.

I chewed on my lips though the cold would dry them out and crack them. He has this thing I said. He just reels off every single fact he can think of when I’m there you know. It’s impressive almost. Like he’s exhausted and wasting away and probably hallucinating all kindsa shit right but there he is with his facts.

What kind of facts.

Not even facts. Just like data. I shrugged and the movement was loud against her coat and finally through all her clothes I felt at my shoulders some tight string of her. The muscles moving in response to me. Junk data. This morning it was battles and estimated casualties. Yesterday he was listing Pokémon.

I laughed. Jigglypuff and all them, I said. That little balding man with all the like, paintings on the walls of mountains and shit, the expensive wine and I take my knife to him and all he’s screaming is.

I stopped, and waved my hands out from her embrace. I don’t even know, I said. Tangela.

He doesn’t even know that it isn’t my job to make him talk. I don’t care what he says or doesn’t say. But it did get me thinking I should play those games again. When I was little I’d download all of them and play them on my computer through an emulator. I smiled. My first taste of piracy. I learned the internet that way.

Sounds like you’re going to be stuck with him for a while she said. She was holding onto my face in her gloves and I felt her leaning forward to kiss me once on the top of the forehead and for a few seconds the ice and the air was pushed back and her warmth and presence moved foremost. I mean that’s pretty defiant right. If I waltzed in there tonight all smiles and food and and.

No knives and drugs I said.

As far as he was concerned she didn’t exist. When we shared the house she was silent and we came outside to talk and he only ever saw me in his one darkened room or saw my ski-masked face and gloved hands and felt my blades or needles or chisels or water, and for him it was only me crashing through his annexed castle. The little conical roofs and pointed windows.

Sometimes I’d take an object that I’d found somewhere in the house in with me when I visited him and talk about it and show him. He’d had a photograph taken from this glacier on a day like this of a youngish woman in sunglasses with a ponytail. She was pinching together her fingers above the tiny pointed roof of his home as if she was lifting it or holding it up. But he’d kept up his interference patterns and I’d junked it and crushed the picture and it was still there, crumpled and inaccessible and showing up muddied whenever the switching circuit opened the room with light.

Whatever I said. It’ll be fine.

She’d pulled her glove from her hand and she was running the backs of her minor knuckles along the curve of my jaw. You’re freezing she said. We need to get you back down to all that warmth.

Down somewhere on the valley floor there’d be wild boar wandering, and deer and hedgehogs and whatever else. In the pale nights of the summer, beneath the blacked-out windows on the upper floors we’d sit out in the garden and watch them move. 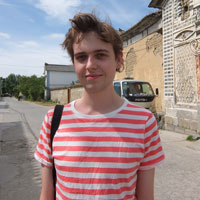 Patrick Ball lives in Philadelphia and is currently studying for a doctoral degree in philosophy at the University of Pennsylvania. He grew up in Sheffield, in the United Kingdom, and has had short stories published in the British literary magazines You Stumble Into A Room Full Of Poets and The Cadaverine Magazine.